A crucial figure in the development of funk and the music of James Brown, he was also a talented jazzman 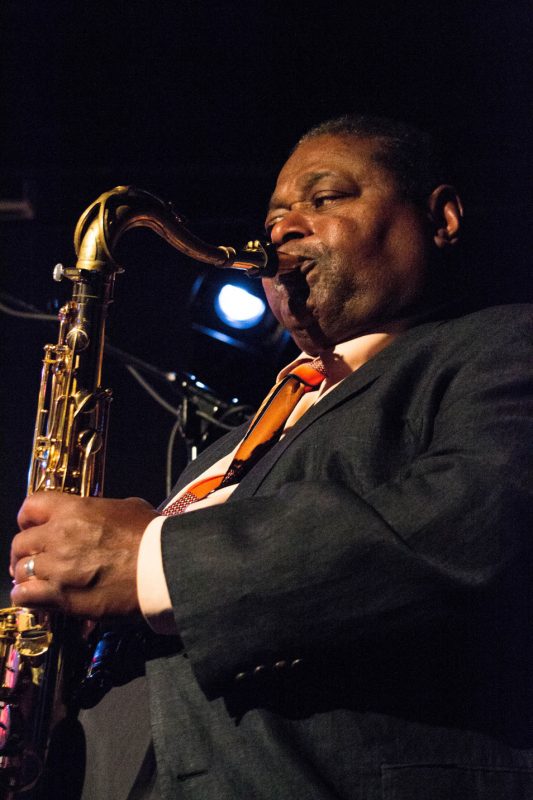 Alfred “Pee Wee” Ellis, a saxophonist, composer, and arranger who was best known for his work in funk and R&B but equally adept and revered in jazz, died September 23 at his home in Somerset, England. He was 80.

His death was announced in a statement by his family on September 24. Cause of death was given as “complications with his heart.”

A member, and eventually leader/music director, of the James Brown Revue, Ellis was an essential pioneer in the creation of funk, fusing his jazz sensibility with Brown’s soul stylings in the singer’s crucial mid-1960s period. He cowrote Brown’s groundbreaking hits “Cold Sweat” (1967) and “Say It Loud—I’m Black and I’m Proud” (1968). His solo composition “The Chicken,” first released as a Brown B-side, became a jazz-funk standard associated with bassist Jaco Pastorius. In the early 1990s, Ellis worked with Brown alumni the JB Horns and Maceo Parker as a saxophonist and arranger. He spent two decades (1979-99) collaborating with Irish singer/songwriter Van Morrison, frequently returning for guest performances with Morrison thereafter.

However, Ellis also had a profound jazz pedigree. He was a student and protégé of Sonny Rollins, whom he met by chance in 1957, and played as a teenager with Ron Carter and Chuck Mangione. In 1969, after his four-year tenure in the Brown band concluded, Ellis worked as musical director at CTI/Kudu Records, where he arranged and played on sessions by Esther Phillips, George Benson, and Hank Crawford. As a freelancer, he worked with Sonny Stitt, Shirley Scott, Leon Thomas, Brother Jack McDuff, and Jimmy Cobb; co-led a West Coast-based band with saxophonist Dave Liebman; and recorded 13 albums under his own name, moving back and forth between jazz and funk and occasionally combining the two.

As the title of “Say It Loud” implies, Ellis was deeply committed to the struggle for African-American civil rights and social justice. He maintained optimism about the future of race relations to the end of his life. “[C]hange is coming and it’s about time, I say,” he told British newspaper The Independent in 2020. “It is going to be painful and take work, but I think progress can happen and people can change.”

Alfred James Rogers was born April 21, 1941 in Bradenton, Florida to Garfield Rogers Jr. and Elizabeth Rogers. His parents divorced when he was very young. He began taking piano lessons at the age of eight; around the same time, his mother remarried to Ezell Ellis. Alfred took his new stepfather’s last name, and the family moved in 1950 to Lubbock, Texas.

The elder Ellis was a cook who also had ambitions in the music business: He managed a band in Lubbock and booked talent for local dances. Musicians were constantly in his household, and it was they who nicknamed his stepson “Pee Wee.” The younger Ellis grew more serious about music himself, becoming a clarinet player in the band at Dunbar Junior High School in 1953. His stepfather would sometimes wake him up late at night to come to the dances and play piano. It was at one of these dances, in September 1955, that Ezell Ellis was stabbed by an angry racist when a white woman danced with him. The nearest hospital would not accept a Black patient, and Ellis died on a gurney in the hallway.

The bereaved Ellis family then relocated to Rochester, New York to live with an aunt. Pee Wee, who by this time had transitioned from clarinet to tenor saxophone, began playing professionally with another local musician his age—trumpeter Chuck Mangione—and Ron Carter, then a student at Eastman School of Music. In 1957, Ellis was leaving a saxophone repair shop in New York City when he happened to meet Sonny Rollins on the street. Rollins agreed to give him lessons, which resulted in Ellis commuting once a week from Rochester to New York.

In 1959, Ellis finally made the move to the city to study at Manhattan School of Music, then returned to Florida. There, in 1965, he received a call from trumpeter Waymon Reed (whom he knew from Rochester) asking him to join James Brown’s band. Ellis accepted, hoping he could make enough with the pop star to afford to play jazz. Within six months, he was Brown’s bandleader and music director, putting him in the copilot seat for the singer’s ascent from stardom to superstardom, as well as the invention of funk. Ellis recalled audience response to “Say It Loud” as one of the greatest thrills of his life.

Leaving Brown in 1969, Ellis commenced his work at CTI/Kudu and freelancing in New York. He then moved to San Francisco in 1977, where he co-founded the sextet with Dave Liebman. Also living in the San Francisco Bay Area at that time was Van Morrison, who enlisted Ellis for his 1979 album Into the Music. He worked off and on with Morrison until 1999, arranging horns on 10 of the star’s albums. In the meantime, Ellis helped Fred Wesley reform the James Brown band without Brown; it was called the JB Horns, and recorded several albums and toured extensively through the ’80s and mid-’90s.

Ellis had recorded a debut album, Home in the Country, in 1977; in 1992 he resumed that solo career with a band called the Pee Wee Ellis Assembly. He was also a member of drummer Ginger Baker’s quartet Ginger Baker Jazz Confusion until Baker’s passing in 2019.

His final performance came three weeks before his death: a September 2 concert at the Bristol (U.K.) Jazz and Blues Festival with Welsh singer Ian Shaw.