From Wikipedia, the free encyclopedia

Samuel Louis Nistico (February 6, 1924 – January 17, 2021), better known as Sammy Nestico, was an American composer and arranger. Nestico was best known for his arrangements for the Count Basie orchestra.[2]

During his career, he arranged music for the Count Basie Orchestra (1967–1984), the U.S. Air Force Band (fifteen years) and the U.S. Marine Band (five years) both in Washington, D.C. In addition, he played trombone in the big bands of Tommy Dorsey, Woody Herman, Gene Krupa, and Charlie Barnet.

During his long career in the television and film industry, he arranged and conducted projects for Bing Crosby, Sarah Vaughan, Toni Tennille, Frank Sinatra, Phil Collins, Barbra Streisand, and Count Basie. As orchestrator, he has worked on nearly seventy television programs, including Mission: Impossible, Mannix, Charlie's Angels, and The Mod Squad.

He has published nearly 600 numbers for school groups and many for professional big bands. He has conducted and recorded his arrangements with several leading European Radio Jazz Orchestras, including the BBC Big Band in London, Germany's SWR Big Band and NDR Big Band and the DR Big Band.

Nestico received a Bachelor's degree in music education from Duquesne University in 1950, and he has received an honorary Doctor of Music degree from his alma mater. Nestico died on January 17, 2021 at the age of 96.[4]

The Airmen of Note, the premier jazz ensemble of the USAF, sponsor an annual competition[6] for composers and arrangers of big band music, in honor of Sammy Nestico. Previous winners are:

sad news, but what a life and contribution to the beauty and learning of our culture. I remember playing his arrangements in Junior High and High School and the teachers telling us he was from Pgh and went to Duquesne. 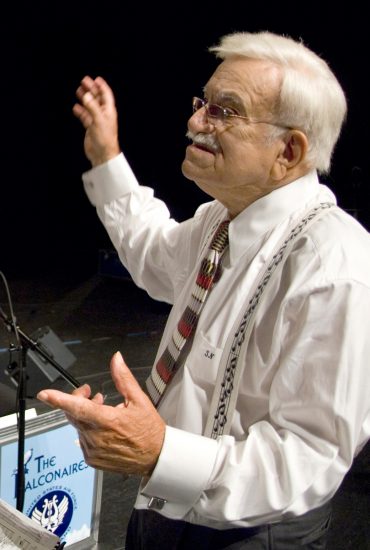 Everyone from my generation of jazz musicians heard Sammy Nestico’s music. If you played in a high-school jazz band, you played Sammy Nestico. All those compositions and arrangements for Basie, he published them. The great thing about Sammy is that his music is so easily accessible, not only to hear but to play. Band directors who maybe aren’t great jazz people can make sense of his music. When I was playing it in high school, it just sounded good. I didn’t know what it was.

Clarity is one of the hallmarks in his writing. The voicings aren’t the complicated voicings that you hear from other writers, like Bob Brookmeyer or Thad Jones. You could always hear his unisons or counterpoint. Sammy had so much respect for Basie and his tradition that he found a natural and brilliant way of bringing his background to Basie’s blues. Basie loved that because he felt he needed that different perspective. Grover Mitchell brought them together, because Grover and Sammy were in the service together. It was a marriage that Basie really appreciated. The Basie band still does Sammy’s charts.

When I was in Basie’s band, I did get to see Sammy work with us. It was remarkable because he was one of the guys. He never made you feel like he was the leader. In most of the photos of Sammy, you’ll see a huge grin, and that grin was a part of his music. His music was always bouncy, happy and grooving.

By the time I joined Basie, Sammy’s music had already been established. We played it every night. Usually we opened with a chart by Sammy. And if someone had a question like, “Hey Sammy, what do you think about this?” Sammy would say, “I don’t know, what do you want to do? Do whatever you want. Whatever sounds good there.” He was that kind of a guy.

I would seek him out every chance I got. There were several occasions when I could sit down and talk with him about his beginnings and the things he did musically that I loved. Writing-wise, I would analyze what he did to the point that when I’m writing something now and I want it to be like Sammy, I’ll write a note on my sketch “à la Sammy.”

I really love how, instead of having the trombone section play the same chord that the saxes were playing, Sammy would have the entire trombone section playing, in unison, the melody that the lead alto was playing. The melody was so powerful but in a way that was warm and thick. The ear always goes to the melody. With Sammy, you have the lead alto playing the melody and the other sax players playing the chords underneath, but suddenly, in the background, you’ve got the melody being supported by this dark, brassy trombone sound. Those were the kinds of things that I learned from studying his music.

Sammy was really giving, like most of the musicians I know and run into. I didn’t really ask him for help. Instead, I wanted to hear more about him and his life. I learned from him the importance of bringing a good vibe to the situation. Going back to his grin, when he walked into a room, it was never a quiet “Hi John.” It was always “HEY JOHN!” with a big smile and hug. If he’s in a good mood and he brings that to the room, then the next thing you know, the whole band is in a good mood.

I think Sammy’s legacy will be that he wrote playable, listenable, and swinging large-ensemble music. If you have an amateur big band, you can play Sammy Nestico’s charts. Same with a professional big band. And everything in between.

[as told to Lee Mergner]

Many of those arrangements were also great for dancing -- as I did and do. His influnce extended to my writing as well.