The writer, musician, and highly influential culture critic is dead at 64 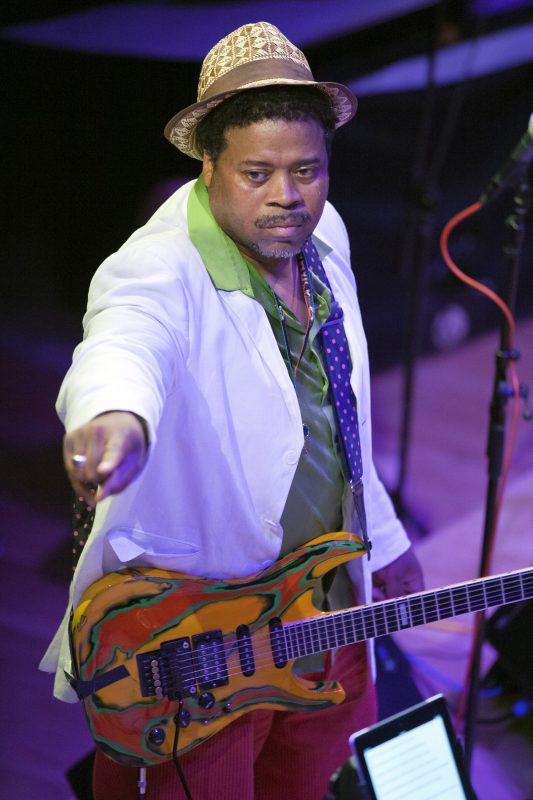 Greg Tate, a cultural critic, musician, activist, and scholar who was among the most trenchant of observers and writers on Black American culture, died December 7 in New York City. He was 64.

His death was confirmed by Duke University Press, publisher of his most recent anthology book Flyboy 2: The Greg Tate Reader. Cause of death was not disclosed.

Tate was a staff writer for The Village Voice from 1987 to 2005, where he wrote about Black culture, politics, and aesthetics in America—but particularly about jazz, hip-hop, funk, and other musical forms. He was one of the first critics to address the then-burgeoning hip-hop movement as a serious artistic development; in 2009, The Source magazine dubbed Tate “the Godfather of hip-hop journalism.”

He took expansive views of all his subjects, and in the process became one of the most distinctive writers in American criticism. His highly influential 1986 essay “Cult-Nats Meet Freaky-Deke” exemplified both his cultural perspectives and—as evidenced in its title—his unique prose style.

“His best paragraphs throbbed like a party and chattered like a salon,” author Hua Hsu wrote in a 2016 reflection in The New Yorker. “[T]hey were stylishly jam-packed with names and reference points that shouldn’t have got along but did, a trans-everything collision of pop stars, filmmakers, subterranean graffiti artists, Ivory Tower theorists, and Tate’s personal buddies, who often came across as the wisest of the bunch.”

He was also a contributor to DownBeat, Rolling Stone, Spin, Essence, Vibe, and ARTnews. Much of his writing for these publications are collected in his books Flyboy in the Buttermilk: Essays on Contemporary America (1992) and Flyboy 2 (2016). He edited and contributed to another collection of essays, Everything But the Burden: What White People Are Taking From Black Culture, in 2003.

Tate was passionate about preserving the stamp of Blackness on American musical tradition. In 1985, he co-founded (with longtime friend Vernon Reid) the Black Rock Coalition, an artists’ nonprofit that sought to reify the Black roots of rock & roll music; over time, its mission grew to encompass a wider spectrum of African-American art and artists, promoting their work and artistic freedom as well as working to combat stereotypes about what Black musicians were stylistically and artistically capable of achieving.

To that end, he was also the founder, guitarist, and musical director of Burnt Sugar (sometimes called the Burnt Sugar Arkestra), an ensemble whose varying size was exceeded by its varying approach to genre. Music writer Michaelangelo Matos referred to it as a “funk-rock-electronic-samba-soul-jazz-fusion-whatever ensemble”; Tate himself described it in 2004 as only he could:

I invented a band I wanted to hear but could not find. Three guitars two drummers two basses a flute one trumpet one alto two cellos one violin three singers acoustic piano synths turntables triangles laptops optional and a partridge family in a pear tree. Five years later this band still follows the teachings of Shelly Manne: Never play anything the same way once.

Fittingly for someone of his accomplishments, Tate was also a scholar and educator, holding appointments both as Louis Armstrong Professor of Jazz Studies at Columbia University and visiting professor of Africana studies at Brown University. He wrote two book-length studies of African-American musicians: 2003’s Midnight Lightning: Jimi Hendrix and the Black Experience and the as-yet-unpublished James Brown’s Body and the Revolution of the Mind.

Many of Tate’s colleagues and disciples paid tribute to him. “What a hero he’s been,” critic Nate Chinen wrote on Twitter. “A fiercely original critical voice, a deep musician, an encouraging big brother to so many of us.”

“Heartbreaking,” Gary Giddins, a longtime colleague of Tate’s at the Voice, told JazzTimes. “Greg burst on the scene at the Voice with so much energy and originality, as a writer and as a musical leader and organizer, that his star power was impossible to miss. … In those days, everything he wrote was important, and it still is.”

Tate’s own take on his importance—if indeed he would have called it that—involved holding himself at bay. In “Cult-Nats Meet Freaky-Deke,” he noted a perceived void of effective intellectual leadership within the Black community, but added, “If you think I’m going to try to fill it, you got another think coming. I’m bold but I ain’t that bad.”

Gregory Stephen Tate was born October 14, 1957 in Dayton, Ohio to Charles E. and Florence (née Grinner) Tate, both civil-rights and political activists who founded the Dayton Alliance for Racial Equality (DARE). In 1971, the family moved to Washington, D.C., where Tate’s father founded the Booker T. Washington Institute and his mother worked as director of communications for the National Urban Coalition—and later for both D.C. mayor Marion Barry and Jesse Jackson.

As a teenager in D.C., Tate began his musical studies, learning the guitar; however, it was reading Rolling Stone magazine and the work of Amiri Baraka that most stimulated his interest in music. He would work to follow in those footsteps, studying journalism (as well as film) at Howard University, graduating in 1980.

Tate moved to New York in 1982, and as soon as he arrived he connected (at the behest of his friend, journalist and playwright Thulani Davis) with Village Voice music editor Robert Christgau. He was soon an active freelancer on jazz and other African-American music.

In that capacity, Tate became close to Vernon Reid, a fellow guitarist who had worked with drummer Ronald Shannon Jackson and founded the hard-rock band Living Colour in 1984. The following year, Tate, Reid, and rock manager Konda Mason came together to create the Black Rock Coalition (BRC) under the credo “Rock ’n’ roll is Black music, and we are its heirs.” Among their initiatives were performing and recording opportunities, educational programming, and the collective Black Rock Orchestra.

In 1987, the year after publishing his “Cult-Nats Meet Freaky-Deke,” the Voice hired Tate as a full-time staff writer, where he became a seminal recorder of the hip-hop music scene that had originated in New York and was exploding across the United States. He also remained a steadfast observer of jazz, writing some of the earliest pieces on Wynton and Branford Marsalis as well as celebrating the electric music of Miles Davis.

The Voice was Tate’s primary outlet—he later proudly called it “the recorder, messenger and proclamatory dictator of what culturally mattered in the province”—but his byline ultimately appeared in countless other music and music-adjacent publications, including JazzTimes.

He founded Burnt Sugar in 1999. He led it with the “conduction” style of guided improvisation developed by Butch Morris, and spearheaded the band through 16 albums and numerous personnel changes. Their final recording, Angels Over Oakanda, was released in September 2021.

In October 2020, Tate added curation to his résumé with the exhibition “Writing the Future: Basquiat and the Hip-Hop Generation” at Boston’s Museum of Fine Arts. The exhibition ran until July 2021.

Tate is survived by his daughter, Dr. Chinara Tate; a brother, Brian Tate; a sister, Geri Augusto (all of New York City); and several nieces and nephews.