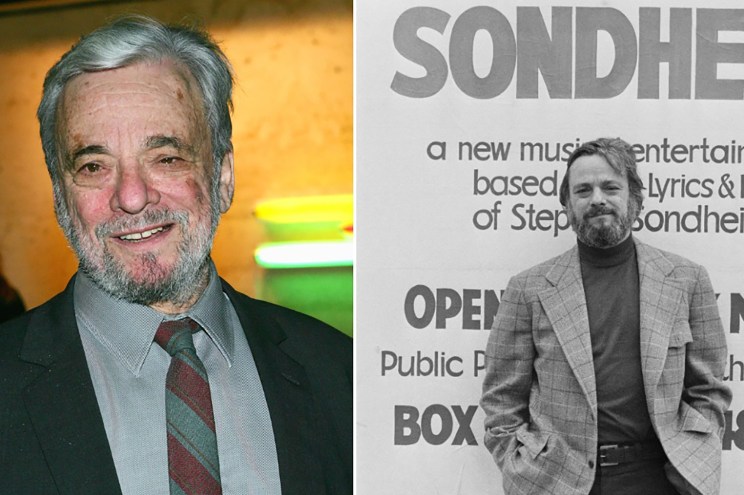 Prolific and prodigiously talented theater legend Stephen Sondheim has died. He was 91.


Stephen Sondheim, the Broadway luminary considered the most important figure in musical theater, died Friday at his Roxbury, Connecticut, home. He was 91.

The legendary “West Side Story” songwriter’s death was announced by his lawyer and friend F. Richard Pappas, who told the New York Times it was sudden, but did not provide more detail. Pappas said Sondheim had celebrated Thanksgiving the day prior.

Sondheim elevated the field by not bowing to writing “jazz hands” musicals — but for challenging his audiences with complex lyrics and difficult themes that resonated for decades through myriad revivals across the globe. Considered the greatest composer and lyricist of the 20th century, Sondheim is best known for legendary productions such as “Company” (1970), “Sweeney Todd” (1979) and “Into the Woods” (1987).

Currently, two recently revived Sondheim shows are running both on and off-Broadway: “Assassins” at off-Broadway’s Classic Stage Company on on E. 13th Street and “Company” at Broadway’s Bernard B. Jacobs Theatre on W. 45th Street. And Sondheim was seen at the Jacobs Theatre just last week for a preview of “Company.”

The world-renowned lyricist and composer scored eight Tony Awards throughout his extensive career, alongside an Academy Award, seven Grammy Awards, a Pulitzer Prize and a Laurence Olivier Award.

Beyond his achievements, which were great and many, he loved to laugh.

“I am the best laugher,” he told the Guardian in 2000. “If you write a comedy, hire me to sit in the audience. Although I tend to guffaw, which is not always great.” 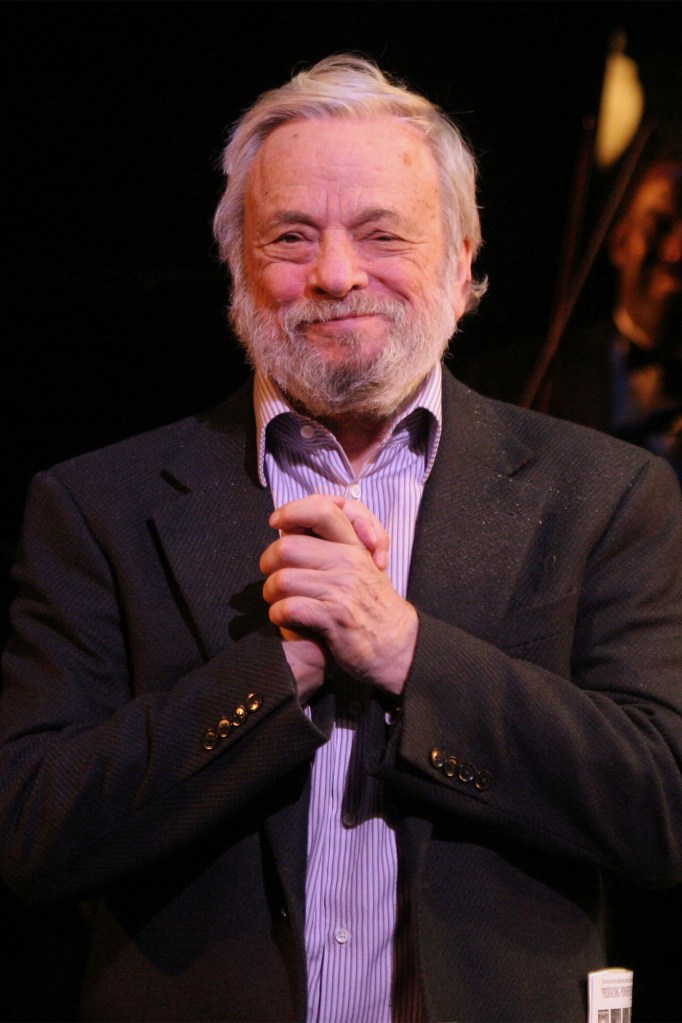 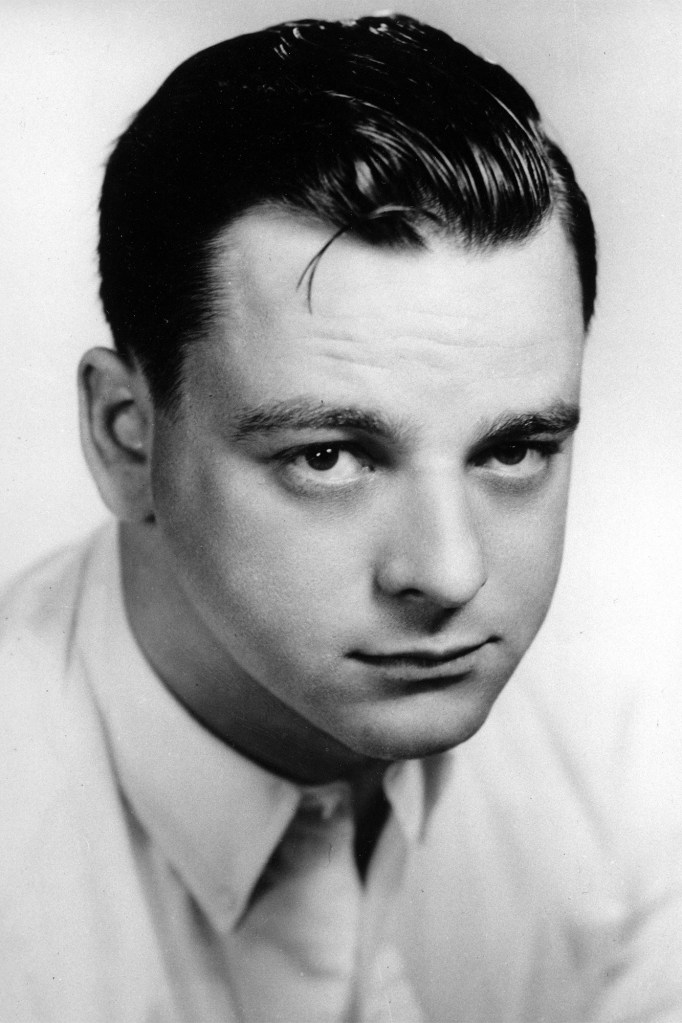 Stephen Sondheim, who wrote the lyrics for the musical “West Side Story,” is seen in this 1957 photo.
AP

Frank Rich, who earned the nickname “The Butcher of Broadway” during his 14 years as the New York Times theater critic, once wrote about Sondheim, “He has changed the texture of the musical as radically as Oscar Hammerstein, and may yet leave our theatre profoundly altered.”

“I want people to enjoy what I write,” Sondheim told the London Telegraph in 2014. “I’m a product of Broadway, no matter how pretentious anybody thinks what I write is. I’m not writing for myself. I’m writing to entertain, to make people laugh and cry and think. I want as big an audience as possible.”

Sir Cameron Mackintosh, notably the world’s most successful producer of musicals once described him as “possibly the greatest lyricist ever.”

“Thank the Lord that Sondheim lived to be 91 years old so he had the time to write such wonderful music and GREAT lyrics! May he Rest In Peace,” Streisand, 79, wrote on Twitter.

Bernadette Peters, who performed in two of his shows, tweeted, “He gave me so much to sing about. I loved him dearly and will miss him so much. Thank you for all the gifts you gave the world Steve.”

Star of Rob Marshall’s 2014 film version of “Into the Woods” Anna Kendrick tweeted, “I was just talking to someone a few nights ago about how much fun (and f – – king difficult) it is to sing Stephen Sondheim. Performing his work has been among the greatest privileges of my career. A devastating loss.”

The first Broadway show that Sondheim composed both the lyrics and music for proved to be a winner out the gate. He scored a Tony Award for Best Musical for that show, the 1962 comedy “A Funny Thing Happened on the Way to the Forum,” which ran for more than two years. 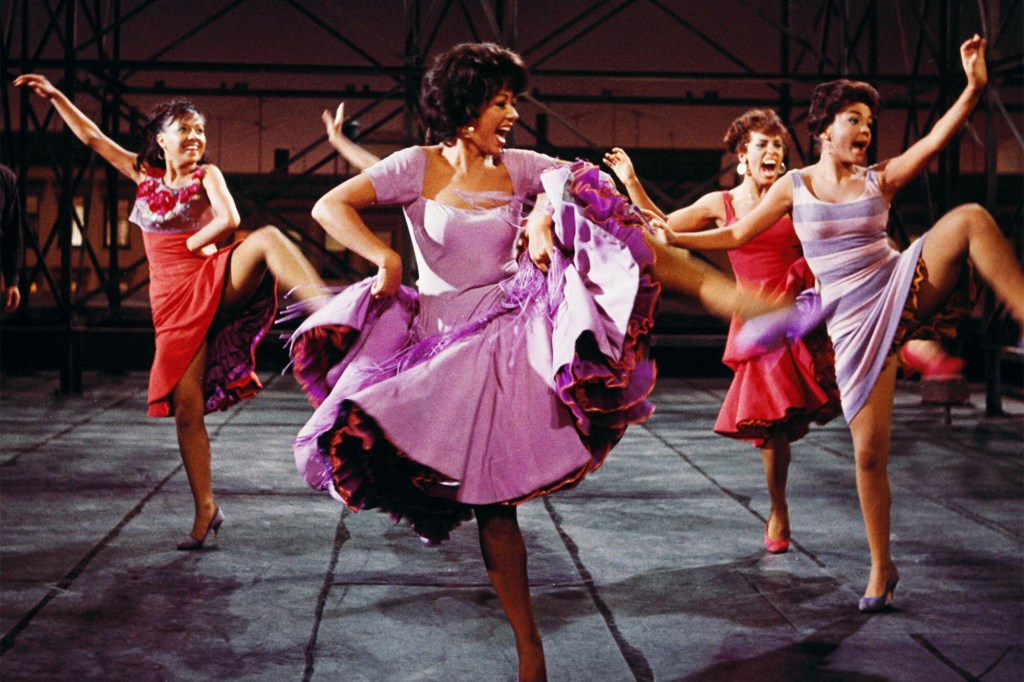 Rita Moreno in “West Side Story,” whose music was by Leonard Bernstein and Stephen Sondheim.
Getty Images 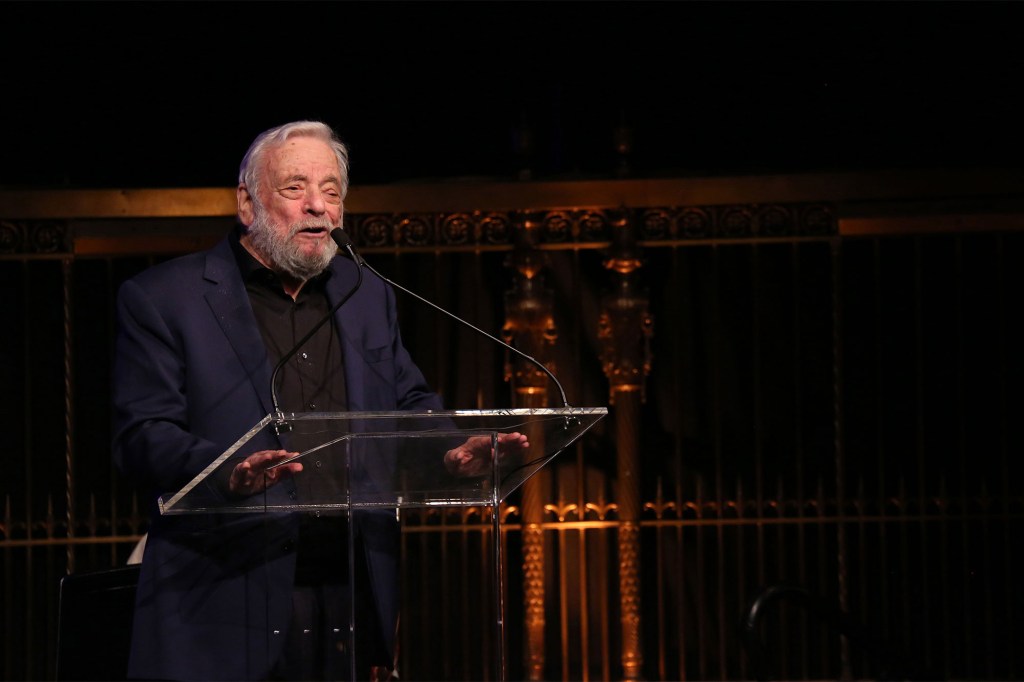 In addition to his many wins, Sondheim racked up scores of Tony nominations starting with Best Musical nods for 1958’s “West Side Story” and 1960’s “Gypsy.”

The composer won multiple Grammys for Musical Cast Show Albums and won Song of the Year in 1975 for “Send in the Clowns.”

He also won the Pulitzer Prize for Drama for “Sunday in the Park with George” in 1985. Thirty years later, in 2015, he was awarded the Presidential Medal of Freedom by then-President Barack Obama at the White House.

Sondheim’s body of work earned him an award at the Kennedy Center Honors in 1993. 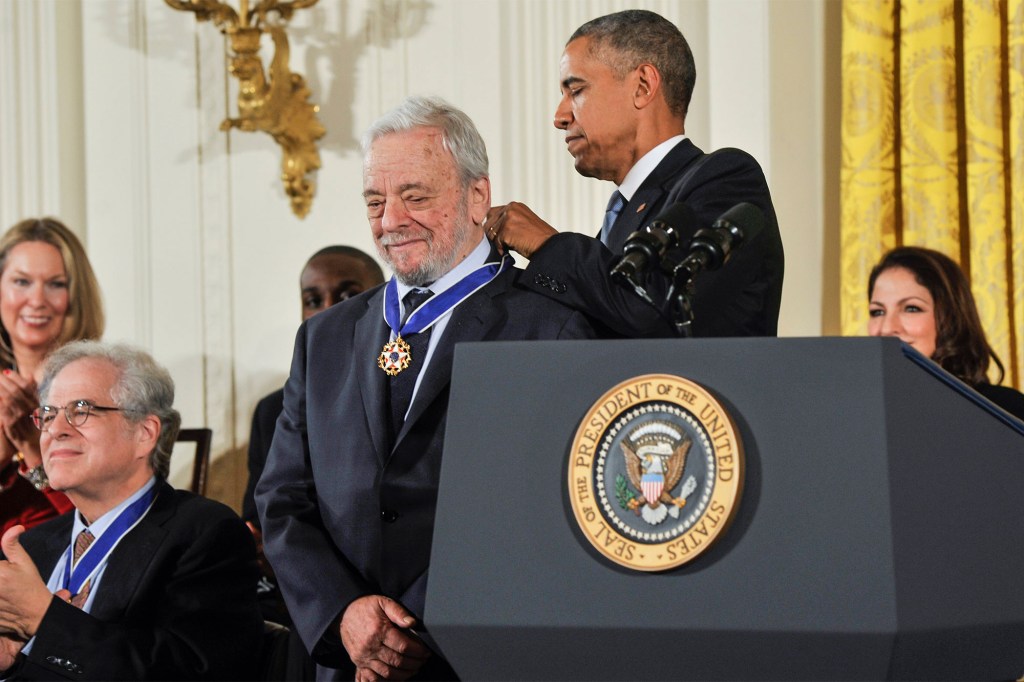 President Barack Obama presents Stephen Sondheim with the Presidential Medal of Freedom during the 2015 ceremony at the White House on Nov. 24, 2015.
WireImage

Aside from working on the musical theater stage, the New York native took his talent to the big screen. He wrote music for films, which included the score for the 1974 film “Stavisky.” Warren Beatty’s 1990 comedy “Dick Tracy” included Sondheim’s tune “Sooner or Later (I Always Get My Man)” — performed by Madonna — and even won the Academy Award.

In 2020, Sondheim suffered a fall that left him unable to attend the opening of his namesake theater in London’s West End. 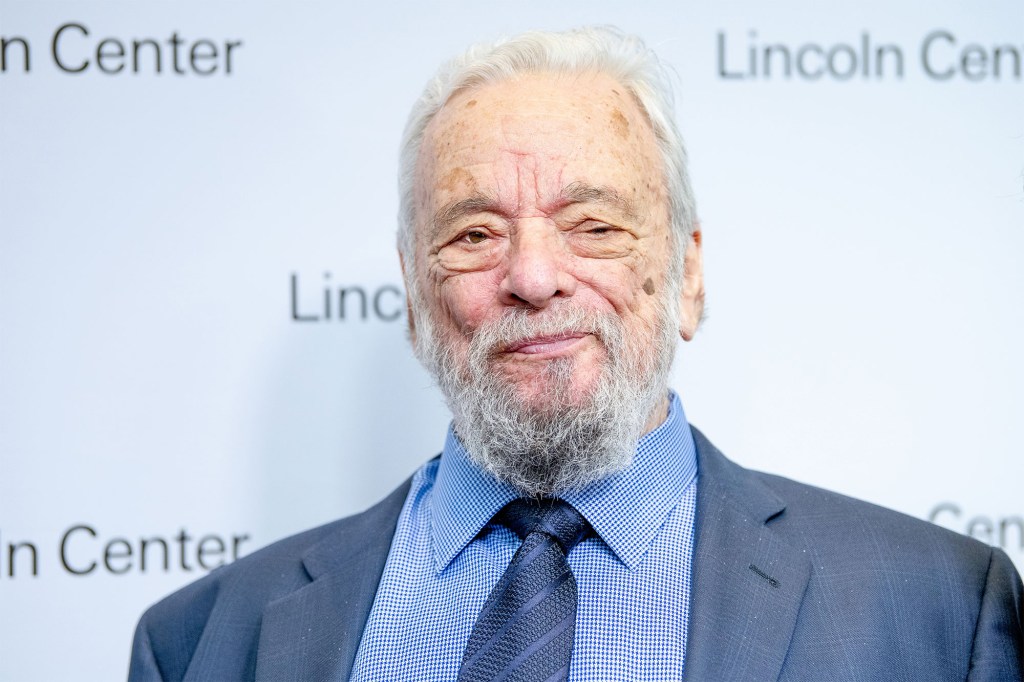 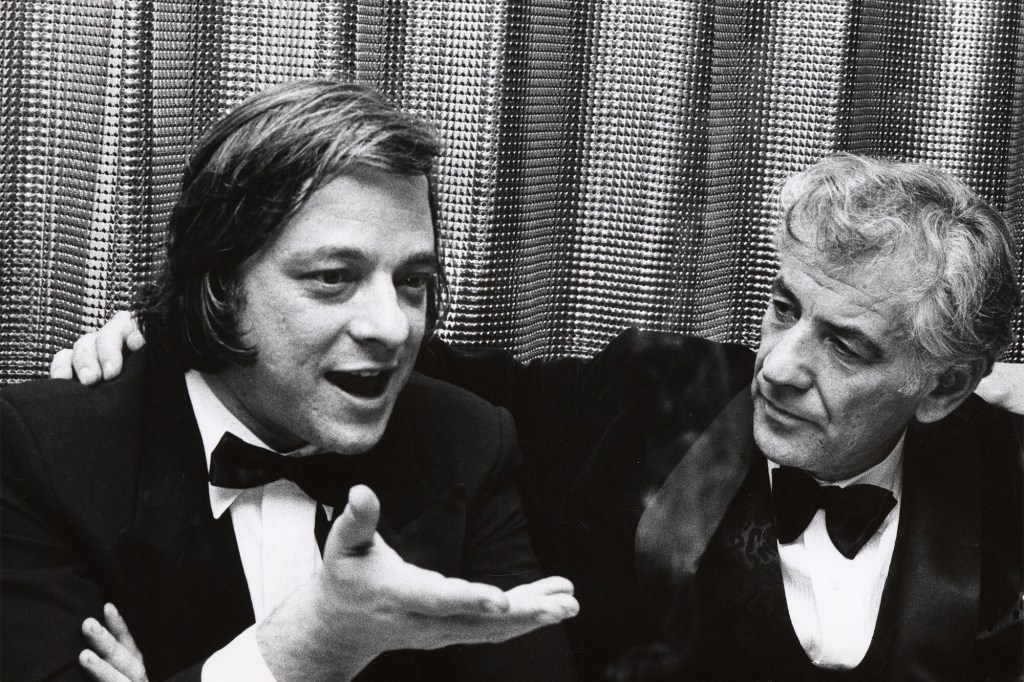 “As I recover from my tumble, I’m impatient to throw away my cane, grab my hat and head across the Pond as soon as I can to see on which cherub Cameron has tattooed my initials,” Sondheim said in a statement at the time. “I am, to put it mildly, chuffed to have my name on a theatre in the West End I have loved visiting ever since my first trip to London almost seventy years ago.”

While he was “in feisty frustrated spirit” after the fall, according to producer Mackintosh, it didn’t stop the party for his 90th birthday, which was held virtually in April, attended by the likes of Meryl Streep, who starred in the 2014 film adaption of his “Into the Woods.”

Sondheim ruled the theater during the 25-year period, from 1970 to 1995, as the driving creative force in the American theater. While he was in his 20s, he wrote “Somewhere” from “West Side Story” and “Rose’s Turn,” as well as the closing number to beat of all Golden Age musicals, “Gypsy.”

Most recently, three film-awards contenders featured his music: “Knives Out,” “Joker” and “Marriage Story.” The latter included a poignant scene in which Adam Driver sings Sondheim’s “Being Alive,” from the 1970 show “Company.”

“You can’t believe that one man wrote all of this,” Broadway leading man Raúl Esparza told The Post in 2020, celebrating a career that began with the lyrics to 1957’s “West Side Story” and grew monumentally since. “It’s like looking at the Sistine Chapel. Steve would kill me for talking about him like this!”