Hello my new PJN friends!! I don't know if this is 'where' I would post a shameful plug or not. I'm new to these sites. I hope it's okay...and sorry it's not music oriented, but .... If you haven't seen this award winning film, "CHAIN LINK" starring Mark Irvingsen,
Jody Jaress, Jim Storm, and many other amazing actors, now you can!! Our theatrical run in LA, NY, Philly, Arizona, Florida, etc. is over and now "CHAIN LINK" will be available on DVD!! Rent, buy... pick up or order online starting today, April 7... 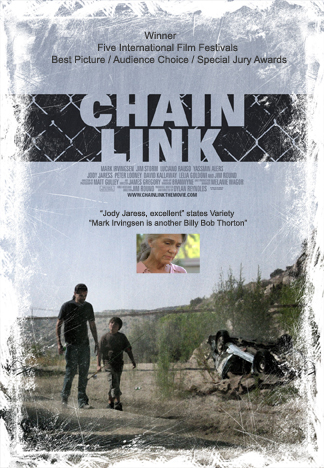 www.chainlinkthemovie.com "CHAIN LINK" DVD available at:
*Blockbuster
*Amazon *
http://www.AMAZON.com/Chain-Link
*Netflix
http://www.netflix.com/Search?v1=Chain%20Link&search_submit.x=0...
*Hollywood Video
*Hastings *
http://www.goHASTINGS.com/ (3rd largest video chain in the USA) plus many other video stores across the states available at other online video stores as well Tell your friends ~ spread the word ~ your support is appreciated!
SOME PARTIAL REVIEWS~
*VARIETY's
'Chain Link' Review, by Top Film Critic - Robert Koehler, Variety Produced, directed, written, edited by Dylan Reynolds. With: Mark Irvingsen, Jim Storm, Luciano Rauso, Yassmin Alers, Jody Jaress, Peter Looney, David Kallaway, Lelia Goldoni, Jim Round. A recently released ex-con can't get anything right in "Chain Link," writer-director Dylan Reynolds' rough, intimate drama that struggles to make a downhill life seem something more than just inevitable. Reynolds focuses on the faces of his committed actors, who are given unusually generous, extended dialogue scenes that -- with few exceptions -- manage to pulse with a sense of reality. Mark Irvingsen's Anthony is a telling portrayal of a dead-ender, and his low-key approach proves an interesting choice. Anthony lives with mom Rhea (
Jody Jaress, excellent) while trying to figure how to come up with enough money to be able to get his own place so his growing son, dubbed "Little Man" (Luciano Rauso), can live with him. Anthony's ex, Jade (Yassmin Alers) is raising the lad, who wants to be with Anthony despite his dad's obvious flaws. The ex-con's well-intended efforts, though, lead to a chain of crimes that get more disturbing. -- Robert Koehler
*LA TIMES: REVIEW OF CHAIN LINK by Top Critic, Gary Goldstein, Los Angeles Times Feature coming out in theatres starting Feb 20th 2009 Dylan Reynolds deserves credit for his confident, singular approach to crafting the stark drama "Chain Link," the writer-director's self-described emphasis on "performance over perfection in image".This low-budget effort contains enough flashes of vigor and vision to put the first-time filmmaker on the industry's radar. In presenting a single, fateful day in the life of Anthony (Mark Irvingsen), an ex-con trying to square things for himself and those around him, Reynolds employs a series of long, hand-held takes that effectively immerse us into a gritty world of losers, hotheads and strugglers. There's a raw authenticity here. -- Gary Goldstein
*LAWEEKLY, reviewed by - Kristi Mitsuda, staff writer Luckily, first-time feature filmmaker Dylan Reynolds’ Chain Link isn’t as clichéd as its official synopsis makes it sound: Reynolds’ film mostly presents a spare, refreshingly clear-eyed depiction of a deadbeat’s downward spiral. (Grande 4-Plex) (Kristi Mitsuda)
*BOX OFFICE MAGAZINE, Review by Mark Keizer , Boxoffice Magazine Chain Link, Print Article posted February 20, 2009 9:05 AM Movies about ex-cons trying to go straight are as numerous as ex-cons trying to go straight, and debuting writer/director Dylan Reynolds adds little to the conversation. But his close-to-the-bone rendering still draws you in, proving once again that movies begin and end with characters you care about. The lack of budget and polish only create a more realistic mood that keeps the viewer involved. Since box office prospects are minimal, Reynolds should consider Chain Link a successful first effort and call it a victory. One does not get the sense that Reynolds is an auteur waiting to happen as much as he’s someone who had a good script, a style dictated by budget and actors who could be trusted to sell the rest. It works fine this time, although Reynolds’ sophomore effort (and let’s hope there’s a sophomore effort) must show increased maturation and confidence with the camera and his actors. Films about going straight run the table from rough-hewn (Ulu Grosbard’s "Straight Time" or James Gray’s "The Yards") to the slick and operatic (De Palma’s "Carlito’s Way"). Inevitability is often the primary narrative impediment, but Reynolds keeps us rooting for Anthony with an observational and non-judgmental style and desolate locales that no family, fiction or non-fiction, should have to endure. The men in the cast are directed to various levels of surliness, except Rauso, who is a good young actor. Little Man wants to be with his father, as most boys do, even when things spiral way out of control. He, of course, doesn’t know any better. The adults, however, are struggling against what they know to be true: you cannot wish or hope a person away from their true nature. Distributor: Cinema Epoch Cast: Mark Irvingsen, Jim Storm, Luciano Rauso, Yassmin Alers and Jody Jaress Director/Screenwriter/Producer: Dylan Reynolds
*From Chain Link to Foxes - Cat's Blog Monday, February 23. 2009 A while back I met Dylan Reynolds and he told me about his movie Chain Link. I got to see it on the big screen last night at the Laemmle's Grand where it's got a week run. It's really a well written film. Anthony is trying to get his life back in order after getting out of prison, reuniting with his ex-wife and young son. But Anthony just doesn't know how to make good choices, as he tries to take a solid grasp at his surrounding it all slips further and further away. It felt very real and raw. The film is coming out on DVD on April 7. I'd say it's worth checking out, go Indie film! "Enjoy my dear friends and family!!! Much happiness to all... and many hugs, Jody"
My Website
See you at the movies!!!!... or in them!!!