Yes, I love that photo. I'm not sure if I was born when that was taken but I have great memories and stories about these legends...especially remembering Mary Lou Williams. She was a close friend and I remember her calling the house very often.

You must feel quite at home on this network with your mother's photo on the wallpaper.  I hope so. 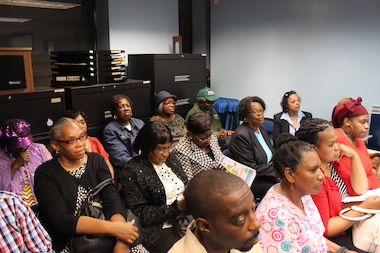 MORRISANIA — Legendary jazz singerMaxine Sullivan spent more than 40 years of her life in Morrisania, and Community Board 3 now hopes to pay tribute to her music and her activism by naming a neighborhood street in her honor.

The board approved co-naming Ritter Place between Prospect and Union avenues "Maxine Sullivan Way" following a heartfelt speech from Sullivan's daughter, Harlem resident Paula Morris. She stressed that her mother, who passed away in 1987, was more than an entertainer.

"Yes, she was a great jazz singer with three Grammys [nominations], one Tony nomination," she said, "but her main commitment was to the community."

Morris paid special attention to what her mother did for children in Morrisania, which included having them take a census to help them get to know the neighborhood better.

Sullivan was born in Homestead, Penn. on May 13, 1911 and began her singing career in Pittsburgh with pianist Claude Thornhill and his band. She recorded her first songs in 1937, including a version of the hit Scottish folk song "Loch Lomond," and moved to 818 Ritter Place in the Bronx in 1945.

"Loch Lomond" has been described as Sullivan's biggest hit, but it was far from her only accomplishment. She also learned how to play the flugelhorn and trombone.

She also appeared in several movies and Broadway shows throughout her career as well, receiving a Tony nomination in 1979 for her performance in "My Old Friends," a musical about aging.

In the early 1970s, she founded a non-profit organization called The House That Jazz Built on Stebbins Avenue, which rented rooms to musicians, provided music lessons for children, gave space to local arts groups and put on concerts and workshops.

Mark Naison, founder of the Bronx African American History Project, praised the project because Morrisania was suffering from arson and other issues at the time.

"In the midst of these tragedies, she opened a storefront youth center on Stebbins Avenue called 'The House That Jazz Built,' where she offered musical instruction, academic support and a safe zone for neighborhood young people," he said. "Entirely financed through her own efforts, the House That Jazz Built was a support of inspiration to Morrisania youth at a very difficult time."

Morris ended her presentation at the meeting with a quote from one of her old teachers about her mom.

"If anyone speaks about your mother," she said, "mention should not only be made about the fact that she was a great jazz singer but also her deep involvement in the life of the community and its betterment."