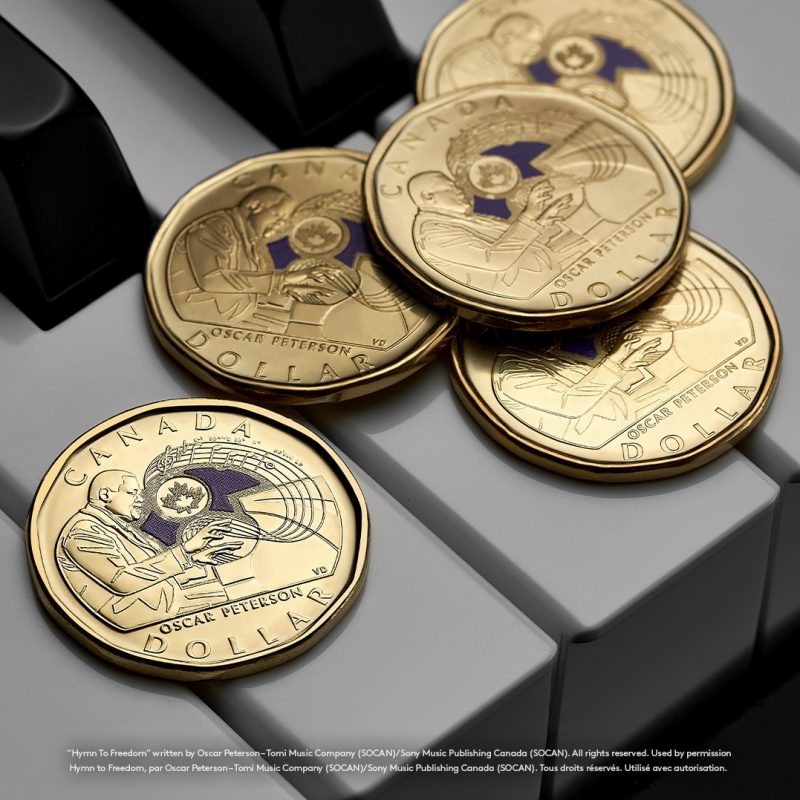 In an unveiling on August 11, 2022, the Royal Canadian Mint announced the creation of a new $1 coin honoring the pianist and longtime Canadian resident Oscar Peterson. Designed by artist Valentine De Landro, the coin began circulating on August 15, the pianist’s birthday (he was born in 1925). The design features Peterson at the piano, with his hands in full motion, from which emerges a flowing musical scale showing two closing bars of his famous composition “Hymn to Freedom.” Peterson’s name completes the design. The pianist Andy Milne was consulted on the music depicted on the coin.

Kelly Peterson, the pianist’s widow, and Peterson’s daughter Céline were in attendance at the ceremony at Roy Thompson Hall in Toronto. “Throughout Oscar’s career he received many awards and honors, each of which meant a great deal to him,” said Ms. Peterson, in a press release received at JazzTimes. “During the nearly fifteen years since his passing, there have been more. All of them humbling. All of them a source of pride. The addition of this commemorative circulation coin bearing his likeness is something neither he nor I could ever have imagined. Knowing that Canadians now, and for generations to come, will hold this coin and be reminded of Oscar Peterson or be inspired to learn about him for the first time evokes emotions challenging to describe. I am deeply, profoundly honored. Oscar was a great pianist and composer. He was a staunch advocate for human rights. Above all, he was always a proud Canadian. As his music is timeless, so too now will he be a part of the Canadian consciousness forever.” 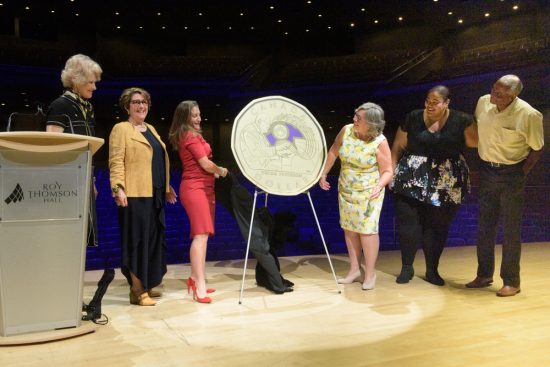 According to the Mint, the Oscar Peterson circulation coin is limited to three million coins, of which two million feature a purple accent, Peterson’s favorite color. Canadians can obtain the coin through their change as bank branches and businesses replenish their inventories of $1 circulation coins. Coins can also be purchased together as part of a six-piece Collector Keepsake set. They are packaged in an illustrated collector card that contains one of each currently circulating coin, from five cents to two dollars. Other products around the Peterson coin include special wrap rolls of 25 one-dollar circulation coins, in colored and uncolored versions, as well as 1 oz. fine silver and pure gold versions of the circulation coin design. These collectibles can be ordered by contacting the Mint at 1-800-267-1871 in Canada, 1-800-268-6468 in the U.S., or online at at the Mint’s website.

“When I was a child traveling the world with my dad, I remember being curious about the figures on each country’s currency,” Peterson’s daughter Céline said in the same press release. “It was an opportunity to learn about the history of where I was visiting. One thing that has always been important to me is that as Canadians, we take the time to explore our history – all aspects of it. Knowing that Canadians at home and anyone who visits from abroad will hold the opportunity to learn about a formidable figure in our nation’s history in the palm of their hand, brings me an immense amount of joy. My dad being given this recognition by the Royal Canadian Mint is something I never would have even thought to imagine because to me, he is and always will be, dad.

Lee Mergner is JazzTimes‘ Contributing Editor. Between 1990 and 2018, he served the magazine in a multitude of roles, including Editor and Publisher.