The State of Jazz Venues In 2009, I published my book A History of African American Jazz and Bluesthat discusses the reasons why the innovators of jazz and blues – Africans in America make paultry income from their cultural product.

I posted this article on my site – “Who or what is killing jazz?”

Marvin Stamm wrote an article about The Jazz Life.

Then, I interviewed some jazz aficionados about the subject. One of them was trombonist Nelson Harrison, who sent me this email, yesterday:

This does NOT bode well. ~ Dr. Nelson Harrison 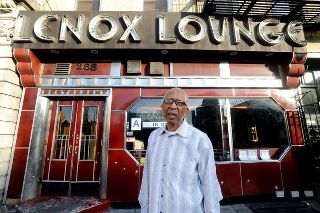 All Al Reed wants is for one of Harlem’s most recognized jazz clubs to continue its legacy – even if it’s owned by a pal of actor Robert De Niro. Reed, who has owned Lenox Lounge since 1988, will not be renewing his lease when it ends in June because he can’t afford the rent.”I’m not selling the place; the landlord is increasing the rent, that I can’t pay,” he told the Daily News of the club that has been a stage for jazz greats ranging from Billie Holiday to Miles Davis.

“I’m sad about it, but I’m realistic. I can’t do too much about it,” he said. “I’m more concerned about Lenox Lounge existing even if it exists without me.” The landlord is hiking the rent for the historic jazz institution from $10,000 per month to $20,000, he said. “There’s no way I can do that. I’m not mad. That’s their business decision They wanted to make some money,” he said, adding at least nine different groups have come to “look at” the 74-person capacity space onLenox Ave. near W. 125th Street. Among the interested buyers, he said, include the owner of the Pink Tea Cup restaurantLawrence Page, Red Rooster owner Marcus Samuelsson and a partner of actor Robert DeNiro.

“Most of them want to use the name,” said Reed, 72, noting at least one interested buyer was considering turning it into a “rock club.” While Reed knows he can’t afford to stay, he’s hopeful he will still have a hand in the future of Lenox Lounge if the new owner decides to continue the legacy of the jazz spot that first opened in 1939. Reed owns the trade rights to Lenox Lounge, he said, and he made it clear, he’s not giving up everything.

“I’m not going to sell the name,” he said. “If they want to use Lenox Lounge, they will have to negotiate with me. I brought it back and I want to see it stay there. I want to keep the legacy alive.” Reed, a life-long Harlem resident who started out selling 15 cent copies of the Amsterdam News when he was about 8, said he’s disappointed to see so many area businesses closing up. “We almost have to partner with someone from out of the community if we want to survive now,” said the retired city cop and Post Office worker, who insisted he never made much money off the lounge. Still, Reed hopes the new owner – whoever it is – will keep him in mind. “The hope is that I can get a little piece of the action,” he said. “I am LenoxLounge, and I will be Lenox Lounge for quite some time. And if they want Lenox Lounge, they want me!”

For anyone who admires musical culture in general, jazz in particular, the news was startling:

In a preliminary report, the Office of the Provost at Columbia College Chicago has recommended closing the school’s Chicago Jazz Ensemble and Center for Black Music Research.

No other institution on the planet studies, archives, documents, disseminates, records and performs music from the vast diaspora of African-American culture as comprehensively as the Center for Black Music Research. And precious few ensembles in America regularly perform jazz orchestral works — historic and brand new — as brilliantly or innovatively as the Chicago Jazz Ensemble.

Howard Reich, as first reported by the Tribune on Sunday, offers recommendations that will be studied by faculty and staff before Columbia President Warrick Carter and college trustees announce their final decision in June.

Yet those who have followed the CBMR since it was founded at Columbia in 1983, and the CJE since its inception there in 1965 (and its revival in the 1990s, after a period of dormancy) already grieve for the possible losses.

“I think it would be an absolute disgrace,” said David Baker, distinguished professor of music at Indiana University’s Jacobs School of Music and a National Endowment for the Arts Jazz Master.

“It would be a blot on the city itself.” ~ Toni-Marie Montgomery, dean of Northwestern University’s Bienen School of Music and a pianist who has performed with the CBMR’s Black Music Repertory Ensemble, echoed the sentiment.

“There would be no single source of documentation for students, for lovers of music, for scholars, experts to obtain this information,” she said, referring to the CBMR and its archival and performance resources.

“I feel we would be returning to the country’s horrendous past, where this kind of knowledge and documentation of black musicians was unavailable. It would be like going backwards.”

The cultural production of African Americans appears to be on the bottom of the list of interests of people of African descent in America. With all the millions, if not billions of dollars in the accounts of people like Oprah Winfrey, Bill Cosby, numerous hip hop artists like P Diddy, Beyonce, JayZ and the estate of Whitney Houston, and the stable of sportsmen and women, it would seem that venues like the Lenox Lounge and the Center for Black Music Researchwould have no problem being funded to preserve America’s only original art form.

Do we have to go to Massa to get the funding?

How do we convince those mentioned above to donate funds to keep these venues operating?

In our fifth year, Women in Jazz South Florida, Inc. has made great strides to keep jazz alive and well in schools and the community-at-large. Still, it’s a daily struggle to keep money in the bank account.

When will African Americans wake up to the value of the music produced in their community?

Why do we expect Caucasians to support our artists, if we do not?

How do we break this syndrome?