Yves Carbonne at The Jazz Network 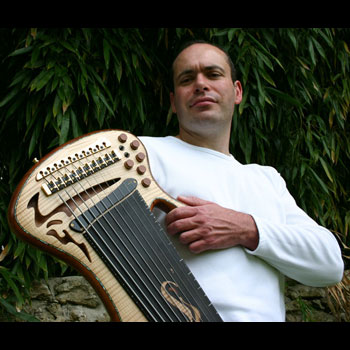 Bassist/composer/arranger Yves Carbonne was born May 23, 1967 in Auch, France, and since his childhood has lived in the Bordeaux region. Though his parents were not musicians, he took piano lessons when he was 7, and soon the young Carbonne discovered a special affinity with low sounds. While his older brother practiced guitar, he urged the younger Carbonne to play with him, and eventually at age 13 Yves started playing the electric bass. Two years later began to study playing acoustic upright bass. While Yves started out largely self-taught on these instruments, he later took some lessons with Alain Caron and Dominique Di Piazza, and by age 17 Carbonne was focusing on a career as a professional musician, who soon found himself performing in jazz and rock ensembles around Bordeaux with frequent visits to Paris. Carbonne’s early influences grew out of his fascination with international jazz greats, particularly Miles Davis, John McLaughlin, John Coltrane, and Jaco Pastorius. Like Pastorius, Carbonne came to focus on pioneering new tonalities and sonic qualities through his instrument. Deep in the pursuit of the instrument’s sonic development, Carbonne later became the first musician to perform on 10 and 12 stringed fretless sub-bass instruments. Yves has formed a lasting association with one of the world’s most acclaimed and innovative luthiers of bass instruments, the founder of the Bass Art Company, Jerzy Drozd. Drozd, based in Barcelona Spain is well known among bass enthusiasts for the models Carbonne plays, the Legend X and Legend XII; and the 12 string instrument features a new low B string tuned at an earth-moving 15.4 hertz! One might infer from the sounds heard on Seven Waves, the instrument when in played in France sounds as if it has the potential to register on Richter scales in the Americas. As Carbonne’s debut project as a leader, in Seven Waves he chose to couple this powerful, and wide ranging tonality with the human voice. His first CD release is a showcase for collaborations with French African jazz and soul impresario, Guillaume Eyango. The project includes some notable guest performers such as the well known solo electric bass master Michael Manring (USA), Roger Biwandu (drums - Joe Zawinul, Salif Keita), Laurent Maur (harmonica) and Anthony Breyer (drums). Orchestrating the voice primarily with the high guitar range of the instrument along with its nearly subsonic depths, Carbonne has crafted a unique and original mix of jazz informed R&B, funk, and soul. It also strays deeply into the relaxing and mellow moods listeners might associate both with jazz performers like Pat Metheny, as well as strains of spiritually inspired “new age” instrumental music.

What Carbonne captures in this recording are the powerful rock solid, bass register underpinning of a brew of all these elements, with musical intuition that renews familiar conventions with a freshness and emotional intensity that at once seems as genuinely felt as it is intelligently composed. Seven Waves keeps its musical heart in the melody, despite the traditionally rhythmic role of its lead instrument. "Most important for me in music is to transmit your emotions, not your ability to play an instrument,” remarks Carbonne. With Seven Waves there’s no doubt he’s attained this goal to compelling effect. Carbonne’s previous studio project in 2005 was a pioneering bass trio album with Michael Manring and Dominique Di Piazza, titled, “Carbonne/Di Piazza/Manring”. He works actively as a studio musician, composer, arranger, improviser, and touring musician. Carbonne’s recording and performing credits include a broad and eclectic assortment of jazz and progressive music luminaries, and a diverse cast of international musicians, among them Bernard Lubat, Archie Shepp, Hermeto Pasqual, Michel Portal, Michael Manring, Dominique DiPiazza, members of the Zawinul Syndicate Randy Bernsen and Roger Biwandu, Glenn Ferris, Uri Caine, Alain Caron, Manu Codjia and many others. Carbonne has performed in many concerts outside his native France, in locations a diverse as California, Colorado, Estonia, Holland, England, Germany, Italy, Spain, Morocco, Senegal, Israel , and Japan. He also teaches bass master classes, and enjoys the sponsorship of Noguera basses, Jerzy Drozd basses, AccuGroove cabs, Labella strings, and Peterson tuners. Contact Yves at his myspace page: http://www.myspace.com/yvescarbonne