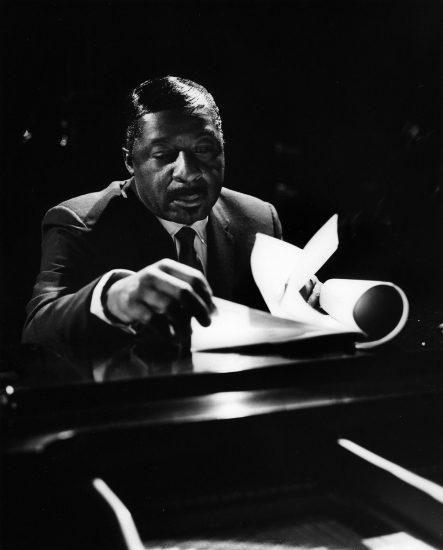 Garner preferred to document his identity in sound. The youngest of five children in a musical family, he could play back anything he heard, and was expressing himself on piano as he assimilated language. Before puberty, the prodigy was already a seasoned pro, having performed in Pittsburgh and environs on local radio broadcasts, at tent shows, vaudeville houses, riverboats, local clubs, and churches. He was ambidextrous, with huge hands and tapered fingers disproportionate to his 5’2″ frame, which facilitated the virtuoso style that he brought to New York in 1944, as documented on his first recordings (made in Danish baron and jazz enthusiast Timme Rosenkrantz’s apartment that fall). From then until his final Octave album, Plays Gershwin and Kern, Garner consistently extrapolated onto the piano the fullness, dynamic range, and inexorable swing feel of the great Black big bands—to Taylor, he cited Ellington, Lunceford, and Basie as favorites. Toward his orchestrative ends, he seamlessly switched meter, tempo, and key from section to section, establishing polyrhythmic patterns and beat subdivisions within his melodic flow, as though a third hand were performing a rhythm-guitar function while his right hand danced across the groove with equivalents of saxophone or trumpet figures. As Moran puts it, “He made the piano sparkle and glow.”

Tatum, Cecil Taylor, and Thelonious Monk were fans. So was George Shearing, who once explicitly parodied Garner on a recording of “I Could Have Danced All Night.” Ahmad Jamal, a fellow alumnus of Pittsburgh’s racially integrated, arts-oriented Westinghouse High School, emulated and expanded Garner’s piano-as-orchestra approach. He influenced brilliant individualists like Red Garland, Dave McKenna, Buddy Montgomery, and Jaki Byard.

Neither the jazz nor the mainstream press treated Garner with the same kind of respect. Perhaps his high visibility triggered skepticism in purists about his musical depth. Perhaps observers thought ear-playing denoted feckless immaturity (an analog to the Mozart character in Milos Forman’s Amadeus). Or maybe they pegged him as a savant-ish caricature like the blind 19th-century piano virtuoso Thomas Wiggins (“Blind Tom”), the effect of whose playing Willa Cather described “as if the soul of Beethoven had slipped into the body of an idiot.”

It could have been a matter of optics: Garner sat on a telephone book while performing, was less than loquacious on stage, accompanied his inventions with emphatic grunts, and wore his hair “patent leather style,” as Whitney Balliett wrote in a New Yorker profile published in 1982 but written during the 1950s. It’s a mostly admiring portrait, based on first-person reminiscences from two of Garner’s siblings, his high-school music teacher (who characterized Garner as “low I.Q.”), and a slew of musician friends and bandmates. But in the opening and closing paragraphs, Balliett tagged Garner as a practitioner of “primitive art,” a “folk” musician, a tag he also applied to Ellington and Armstrong.

Admiration and condescension coexist equally in a 1958 Saturday Evening Post profile, in which Dean Jennings (whose celebrity subjects during this era included John Wayne and Ernest Borgnine) contrasts paeans to Garner’s otherworldly skills with a litany of racially encoded idiosyncrasies. In Jennings’ narrative, Garner “absent-mindedly” leaves behind his clothes in hotels, “conducts a six-figure business on street corners or in phone booths,” “has never owned a piano,” carries hundreds of dollars’ worth of records on the road, and mistakes Bach for a brand of beer.

Midway through the piece, Jennings conveys to Garner a remark from percussionist Harold Farberman, whose compositions Max Roach recorded a few months after the article appeared. “He can’t write music,” Farberman said of the pianist. “But he uses all the classical techniques—diminution, augmentation, wide key ranges, polytonality and rhythmic variations.” In response to that encomium, Jennings reported, “Garner’s big eyes rolled around like dice in a cup. ‘Man, that’s too angular Saxon for me. But if I read you right this cat likes me.’” For Jennings, this signifying riposte was “a typical Garner malapropism.”

Reading that makes Robin Kelley bridle. “Garner took a word that’s associated with musical analysis, snipped, and then used it in a pun—and everyone knows puns are the highest form of humor,” he says. “The writer does not even get it! You cannot have a low IQ, or be slow and naive, and say that. Garner’s sense of humor was somewhat similar to Monk, in that he liked to put you on. His job was to make some music, and he loved making music, which got translated into being called absent-minded or not really caring. The Black press, on the other hand, portrayed Garner as dignified, militant, race-conscious, intelligent. This is the Erroll Garner we don’t know.”