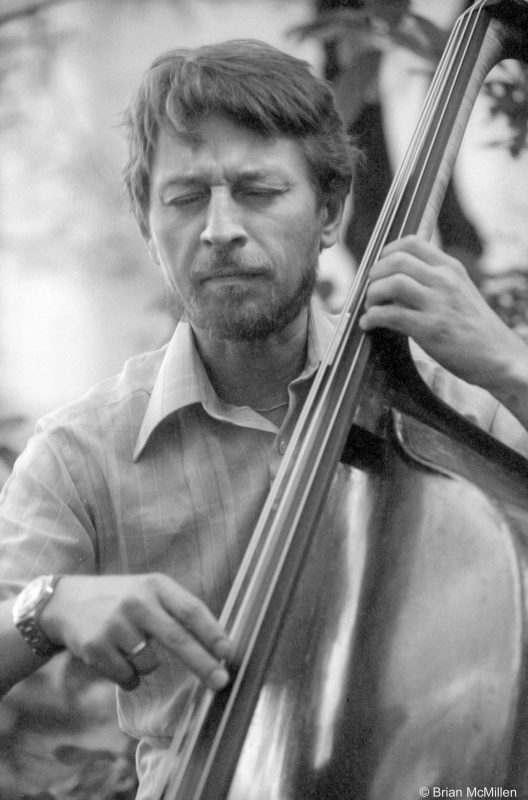 George Mraz, a Czech bassist who was widely regarded as one of the greatest jazz bassists of all time, died September 16. He was one week past his 77th birthday.

His death was announced by his wife, pianist Camilla Mraz, who posted an image memorializing Mraz on her Facebook page. According to some reports, Mraz died in Prague, capital city of the Czech Republic, but neither this nor his cause of death has been officially verified.

Growing up behind the Iron Curtain, Mraz learned about jazz by listening to Voice of America radio broadcasts, then conquered jazz scenes in Prague and Munich before emigrating to the United States at the cusp of the 1970s. In the ensuing decade he became one of the music’s most prolific and in-demand bass players. His credits in the ’70s alone included touring and recording with Dizzy Gillespie, Oscar Peterson, Zoot Sims, the Thad Jones/Mel Lewis Orchestra, Stan Getz, Roland Hanna, Dee Dee Bridgewater, Bill Evans, John Abercrombie, and Tommy Flanagan. Many of these artists (and others) became frequent employers in the following decade as well.

A true virtuoso on his instrument, Mraz possessed a tone that was both full-bodied and remarkably agile—thus seeming lighter than it actually was. It enabled him to excel across multiple styles of jazz, from Gillespie’s bebop stylings to the more experimental avenues of Abercrombie and Dave Liebman.

“He plays the bass as though he invented it,” said pianist Richie Beirach, a collaborator of Mraz’s for over 40 years.

For all his sideman work, however, Mraz’s recordings as a bandleader were relatively rare. In a discography that included well over 400 sessions, the bassist led only nine on his own, and co-led on a dozen others. He was somewhat more prolific as a leader in live performance, leading a trio in his final years with his wife Camilla and drummer Anthony Pinciotti.

Nevertheless, Mraz was hailed as a “musician’s musician” for the obvious respect and demand he received for his services from his colleagues.

Jiří Mráz was born September 9, 1944 in Pisek, in what was then the (Nazi-occupied) Protectorate of Bohemia and Moravia. At seven years old, he began studying classical violin. At 12, tuning into the operas that played on Sunday-night radio, Mraz came across a performance by Louis Armstrong. “The music made me feel good, and I liked it better than a lot of other things I had heard,” Mraz told Bass Musician magazine in 2009. “That’s when I started looking into jazz.”

By that time Mraz had switched from violin to double bass. He began recording broadcasts on Voice of America, studying every instrument and drawing inspiration on his own from the likes of Ray Brown, Ron Carter, Paul Chambers, and, especially, Scott LaFaro. When at 16 he enrolled at the Prague Conservatory, Mraz was studying classical music during the days, then playing at the city’s jazz clubs every night. Graduating in 1966, he stayed on the Prague scene, then began playing around Europe.

Mraz moved to Munich in 1968, but only a few months later he left upon winning a scholarship to study at the Berklee College of Music in Boston. Again, he supplemented his daytime schoolwork with nighttime performances, especially at the Peabody, Mass., club Lennie’s on the Turnpike—where he performed alongside Clark Terry, Herbie Hancock, and Carmen McRae. Then in the winter of 1969, he received an invitation from Dizzy Gillespie to join the legendary trumpeter for two weeks in New York. Gillespie’s band split the bill in those two weeks with the Oscar Peterson Trio. Peterson took Mraz’s number and called him a few months later to ask the bassist to join his band.

After touring and recording for two years with Peterson, Mraz moved to New York in 1972 and began his freelancing career in earnest. The following year he took over the bass chair in the Thad Jones/Mel Lewis Orchestra, solidifying his status as one of the top-call bassists in jazz. During that time he also gained seats in the bands led by saxophonist Stan Getz and pianists Bill Evans, Hank Jones, and Tommy Flanagan. Additionally, he was a member of the leaderless New York Jazz Quartet with Frank Wess, Roland Hanna, and drummer Richard Pratt. His first album as a co-leader, 1977’s Alone Together, was a duo recording with pianist Masaru Imada; the following year, he made his studio debut as a leader with a trio date called Plucking and Blowing, but it went unreleased until 2015.

The association with Flanagan proved to be an enduring one, and Mraz worked regularly with the pianist throughout the 1980s and ’90s. He also worked off and on with Getz and the New York Jazz Quartet, and was a founding member of the progressive quartet Quest—beginning a long association with pianist Richie Beirach. His freelance career only intensified, with gigs ranging from saxophonists Joe Henderson and Joe Lovano to bandleader Benny Carter to pianist/vocalist Freddy Cole. In the ’90s he began working with another leaderless collective, this time the trio Manhattan Trinity with pianist Cyrus Chestnut and drummer Lewis Nash.

In his final years, Mraz’s primary vehicle was his own trio, though he remained a busy freelancer. In 2016, complications of a pancreas condition removed him from active musicianship, though by 2017 he had returned to performing.