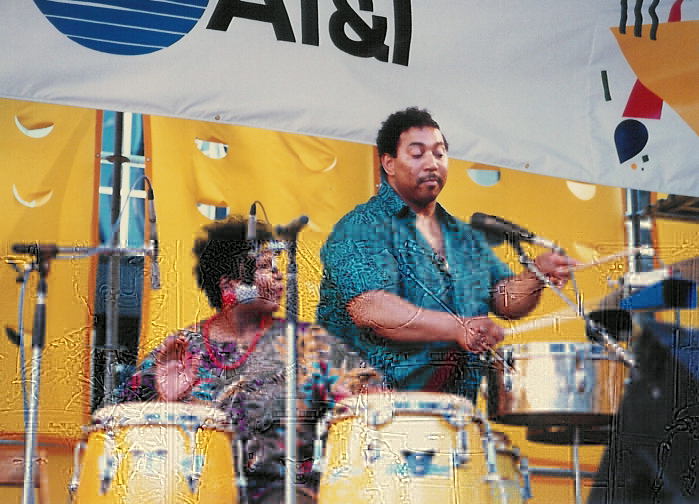 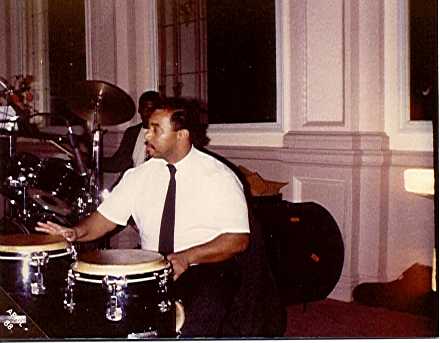 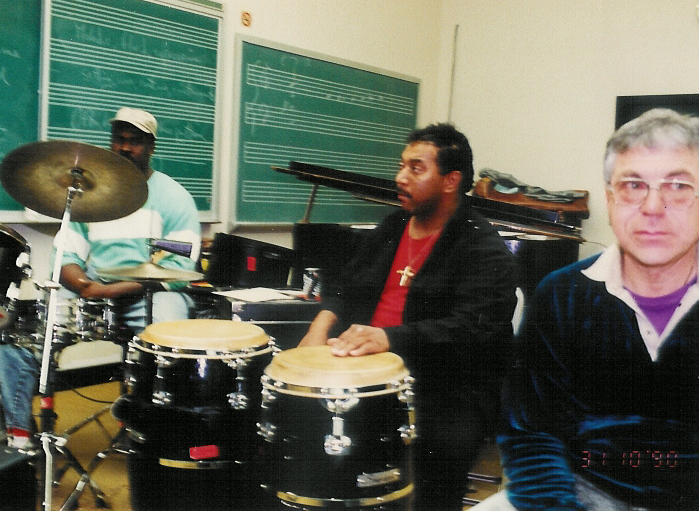 Our condolences go out to all the family and friends of Congalero Master Percussionist Cecil Valdez Washington.  Words alone cannot fully express the contribution Cecil made through his music and as a person to the work of our ministry.  Cecil was most humble and kind, full of great character and stature.  The Original Bobby Fulton Singers were blessed to have Cecil as our only percussionist when we started out formally on our gospel music journey.  Cecil played on our first gospel Lp "Til I Fly Away" and it's amazing how his musical gift continues to be a blessing to souls in so many places as the Lord leads.  Following is an early photo that I took of Cecil when he was in the recording studio with us.  We hope that, along with our prayers, it will help to bring comfort and pleasant memories to the family and all who have been blessed by our brother, our friend and fellow musician.  Godspeed. Hello friends. This is Cecil's wife, Carolyn. First I want to thank you all for your condolences, comments, recognition of Cecil as a friend and musician.

Here are the details for his upcoming funeral:
Place: House of Law, Pittsburgh, PA (or you can go to their
website & click on Streaming link, if not attending in person)
Date: Wednesday, June 10, 2020
Viewing: 11a.m - 1pm ET
Eulogy: between 1-2pm ET
Note: Cremation to follow. We won’t be going to a cemetery

Sometime before June 10th, The House of Law will put a streaming link as well as Cecil's obituary page on their website so that people can view everything from the safety of their homes if they don't want to come to the funeral home.

If you're planning to come to the funeral in person, please keep in mind that you'll be required to wear a mask and do social distancing. At this time, the funeral home will allow 25 people in the facility at any given time. Cecil is being cremated therefore we won't be going to a cemetery.

For now, I will occasionally monitor Cecil email address: cecvaldez@hotmail.com, as time permits.

With gratitude, the family of Cecil William Washington would like to express our appreciation for your prayers, words of kindness, and for all acts of love and concern extended during  the time of our bereavement. Your generosity and support are helping us to heal.

was born on August 12, 1946 in Reading, PA and fell asleep in death on May 24, 2020, due to complications from the Coronavirus.  At an early age Cecil and his family moved to Pittsburgh, PA where they lived on Mulford Street in Homewood until he joined the Army.

In 1979 Cecil was united in marriage to Carolyn McMahon.  They had already taken a liking to each other while at Westinghouse High School in 1966, the year Cecil graduated. However, they both took different paths while they remained connected to the entertainment field.  Years later, they just happened to run into each other at the Original Hot Dog Stand in Oakland, and have been together ever since.  They would have been married 41 years at the end of June 2020.  Carolyn was his best friend, confidant and true love of his life.  Already skilled as an executive assistant, she automatically started managing his music career from the moment they reunited.  To this union, Cecil brought one son and Carolyn brought two daughters from previous marriages.  Carolyn then gave birth to Cecil’s daughter.  All of Cecil’s children want you to know that Cecil provided a strong foundation to the family.  He would do without to make sure his family was taken care of first.  He worked during the day and performed at night to make sure food was put on the table.  He never partied, drank, smoked or indulged in things such as that all through his life.  He was totally devoted to his wife Carolyn and family up until his death.  His children said he was the most wonderful father they could ever have.

At an early age, Cecil taught himself how to play the bongos, congas, timbales. He started performing and developing a deep bond with the local musicians as well as renowned artists from all over the world, up to the end of his life.  After graduating from Westinghouse High School, he entered the U.S. Army in August 1966, during the Vietnam era.  Some time during his tour of duty, he was entered into a talent show. Because he won first place, he ended up performing in the USO shows, traveling on one of  the Army’s private jets throughout Germany and other countries, entertaining the troops until his honorable discharge in July, 1969.  After leaving the Army, Cecil returned to Pittsburgh and obtained an Associate Degree in Drafting.  He worked for the American Shear Knife Company in Homestead for about 18 years.  Cecil and Carolyn started their band called Cecilio Valdez Washington and the Afro-Latin Band and performed at various music festivals for over 12 years.  In October 2019, Westinghouse High School inducted Cecil into the Wall of Fame; and he was also honored at a neighborhood party later that day.  A plaque with his picture and bio is displayed on the wall as you enter that school.

Using the stage name Cecilio Valdez Washington for well over 60 years, he performed at a multitude of venues in the U.S. as well as abroad until he eventually became an internationally known master percussionist.  Starting in the mid-80’s Cecil performed for 25 years at the annual Spring Jazz Concert at the University of Pittsburgh with Dr. Nathan Davis and featured guests such as Herbie Hancock, Zakir Hussain, Benny Golson, James Moody, Mark Whitfield, Clark Terry, Curtis Fuller, Jon Faddis, Monty Alexander and Larry Coryell, to name a few.  He also performed overseas with Nathan Davis’ band at the Jazz Middelheim in Antwerp, Belgium and in the Guadeloupe French Antilles.  Cecil also performed with the Pittsburgh Steelers Jazz band with Walt Harper during the Franco Harris, Lynn Swann era at their home games.  Cecil moved to Columbus OH in 1993 and resided there until his death.  While in Columbus he worked at Chase (formerly Bank One). He also performed with local musicians during the 27 years he lived there.  In 1998 he joined the Afro Rican Ensemble and toured under the leadership of band leader, Rolando Matias for six years.  They performed at venues such as the Ocho Rios Jamaica Jazz Festival, Dominican Republic Jazz Festival, St. Lucia Jazz Festival, the Kennedy Center, Biltmore Estates, Martha’s Vineyard and BET Jazz to name a few.  Their CD titled Latin-Soul-SA & Jazz was a great success. Cecil’s extensive bio can be found under his stage name on the internet.

Cecil felt that his greatest accomplishment was when he got baptized as one of Jehovah’s Witnesses on March 16, 2019.  He loved his spiritual brothers and sisters and was amazed at the love they have among them as well as the love they showed for Jehovah and his word, the Bible. The preaching work was very important to him and he also participated in the letter writing campaigns.  The resurrection hope found at John 5: 28, 29 brought him much comfort.

To send flowers to the family or plant a tree in memory of Cecil William Washington, please visit our floral store.

I did not know Cecil passed. Another great gone.

That's what we're here for, to touch the world and its generation's with some good notes, that sometimes turn into sad notes that turn into Blue notes.
Keep it  1 4 5 1
Fairwell to a great player ' Thanks
----Ross "Skip" LeCompte

Note:  over the past two decades, Benny (IGolson) has always kept in touch with Cecil.  After the filming of Steve Spielberg's movie titled "The Terminal" (starring Tom Hanks), Benny told Cecil about how honored he was to appear in that movie.  He said Steve and Tom have a love for jazz.  Also, around the Fall of 2019 Benny told Cecil about how much he enjoyed performing on a jazz cruise in Janauary that year.  A day or two  day after Cecil's June 10th funeral, Benny emailed me apologizing for not reaching out to me until after Cecil's funeral.  He said he just completed a time-sensitive recording project that he was committed to during that time.   The amazing part about all the things I mentioned, above is.... Benny is in his 90s and still going strong!!