Frank Wess, 91, Saxophonist and Flutist With the Basie Band, Dies 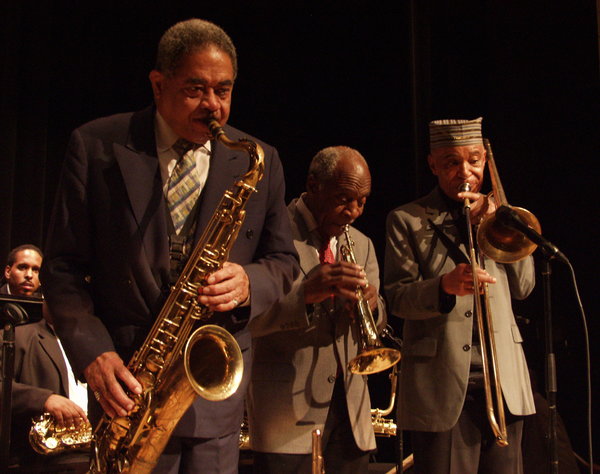 Frank Wess, who helped popularize the flute as a jazz instrument in the 1950s and ’60s with the Count Basie Orchestra, where he was also a standout saxophone soloist, died on Wednesday in Manhattan. He was 91.

A sortable calendar of noteworthy cultural events in the New York region, selected by Times critics.
The cause was a heart attack related to kidney failure, said his longtime companion, Sara Tsutsumi.
Mr. Wess was not the first flutist in jazz. But his tonally rich and technically deft flute solos enjoyed an unusually prominent platform: the front row of the powerhouse Basie ensemble.
Mr. Wess had been studying flute at the Modern School of Music in Washington when Basie asked him to join a big band he had formed in 1952 to highlight new compositions and arrangements, many of them by Neal Hefti. It became known as Basie’s “New Testament” band, to distinguish it from the equally impressive and popular big band he had led in the ’30s and ’40s.
Mr. Wess, who had earlier played with bands led by Billy Eckstine and others, initially resisted, saying he was weary of the road and wanted to finish school. But Basie kept calling.
“And at about the end of my school year, he called again and said he thought he could get me more exposure than I had,” Mr. Wess recalled in a 2005 interview with the website All About Jazz. “That struck a chord in me. I said, ‘Maybe that’s what I need.’ ”
He joined in 1953 and was an immediate success. Mr. Wess would play tenor saxophone for a few tunes, swapping solos with his fellow tenor player Frank Foster, then switch to flute on the next song. Beginning in 1959, he was voted best jazz flutist for five years in a row in Down Beat magazine’s critics’ poll.
The critic Gary Giddins called that Basie band “the most irreproachable virtuoso ensemble ever to work the dance-band idiom.”
Mr. Wess left Basie in 1964 and moved to New York. There, he played with a band led by the trumpeter Clark Terry and alongside the pianist Roland Hanna in the New York Jazz Quartet. He also led groups of his own and played on television (he was a member of the “Dick Cavett Show” orchestra), in recording studios and in the pit of Broadway musicals.
In the 1980s, he and Mr. Foster formed a quintet, Two Franks, that stayed together for two decades. Mr. Wess also led a big band that toured Japan and featured many Basie alumni, including the trumpeter Harry Edison, the trombonist Benny Powell and the saxophonist Billy Mitchell.
In 2007, he was named a Jazz Master by the National Endowment for the Arts.
He released several albums as a leader and continued to record and perform until earlier this year. He released “Magic 101,” featuring the pianist Kenny Barron, in June. “Magic 201” is to be released in February.
“Retire?” he said in response to a question from All About Jazz. “To what? I’ve never done anything else in my life. I never had a 9 to 5, or none of that — I wouldn’t even know where to start. So you just do what you know how to do.”
Frank Wellington Wess was born on Jan. 4, 1922, in Kansas City, Mo. His father was a school principal, and his mother was a teacher who encouraged him to learn music. When he was a boy, she took him to hear the classical tenor Roland Hayes and the blues singer Ida Cox. He received his first instrument, a saxophone, when he was 10.
He trained as a classical musician early on — on saxophone, not flute. He played in a state high school orchestra in Oklahoma, where the family had moved. The family later moved again, to Washington, where met the pianist Billy Taylor in high school. The two became lifelong friends, and Mr. Wess appears on the 1959 recording “Billy Taylor With Four Flutes.”
In addition to Ms. Tsutsumi, his survivors include two daughters, Francine and Michelle; two grandchildren; and four great-grandchildren.
He played tenor saxophone and clarinet in an Army band during World War II. Afterward, he played in the Eckstine orchestra before he began studying flute in 1949 at the Modern School. He studied under Wallace Mann of the National Symphony in Washington as well as with Harold Bennett, the longtime principal flutist for the Metropolitan Opera. And a few years later, Count Basie called.