Pittsburgh native bassist BOB BABBITT - One of the last surviving members of the Funk Brothers, 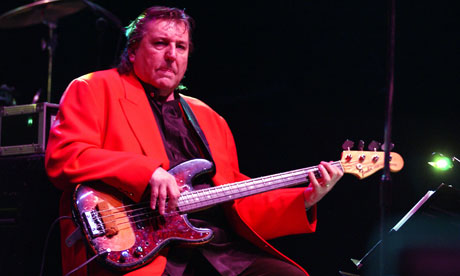 Bob Babbitt at the Royal Festival Hall in 2004 during tours of America and Europe by a Funk Brothers band. Photograph: Tabatha Fireman/Redferns The bass guitarist Bob Babbitt, who has died of brain cancer aged 74, was one of the last surviving members of the Funk Brothers, that exclusive club comprising a dozen or so session musicians who created hundreds of tracks for Tamla Motown in the 1960s and early 70s. His playing can be heard on more than 200 American Top 40 hit recordings by Stevie Wonder, Marvin Gaye, the Temptations, Diana Ross and many others.

Babbitt was born Robert Kreinar in Pittsburgh, Pennsylvania, and as a child took up the double bass and studied classical music. The training was to stand him in good stead later in his career, but local radio stations converted him to R&B and soul. As a teenager he played in clubs and was offered a place at the University of Pittsburgh. However, his father's sudden death meant he had to earn a living, and in the late 1950s he moved to Detroit, where an uncle had found him work in the construction industry. He adopted the stage name Babbitt and was soon immersed in Detroit's rich music scene. He joined a group called the Royaltones and his prowess landed him a job with Del Shannon's band – he can be heard on Shannon's 1962 hit Little Town Flirt. At the city's Golden World studios and as part of Wonder's touring band in 1966, Babbitt came into contact with the Motown musicians.

The following year he played his first Motown sessions, for Wonder. The increased volume of work at Motown and the unreliability of the star bass guitarist James Jamerson due to alcoholism led to Babbitt becoming one of the first white instrumentalists to join the Funk Brothers. There was no racial tension in the studio, and when riots broke out in 1967 the black musicians escorted their white colleagues to their cars. Jamerson is widely regarded as the greatest bassist in pop music and he became a friend and mentor to Babbitt, who was able to observe his playing at first hand. "He believed in freedom of expression and that you should make your bass sing like a voice," Babbitt told an interviewer. And just as Jamerson had formed a crucial partnership with the drummer Benny Benjamin, so Babbitt was part of classic rhythm sections with Richard "Pistol" Allen and Uriel Jones. Babbitt's Fender Precision bass sang on numerous hits between 1967 and 1972. These ranged from the psychedelic sounds confected for Norman Whitfield's production of Temptations hits such as Ball of Confusion to the infectious rhythms of Wonder's Signed, Sealed, Delivered, the stark backing for War by Edwin Starr and the gentle intensity of Smokey Robinson's Tears of a Clown. Both he and Jamerson contributed to Marvin Gaye's landmark album What's Going On of 1971.

Perhaps Babbitt's greatest moment on record came when he played a renowned funky and rumbling solo on Scorpio, a Top 10 hit by his fellow Funk Brother Dennis Coffey in 1971. The Funk Brothers era came to an abrupt end in 1972 when Motown's founder, Berry Gordy, decided to move the company's base to Los Angeles. Few of the musicians opted to follow and Babbitt moved on to find session work in New York with Gladys Knight, Frank Sinatra and Bette Midler, and in Philadelphia, where he worked with the producer Thom Bell on hits by the Spinners. In 1986 he settled in Nashville, from where he toured with Brenda Lee, Robert Palmer and Joan Baez.

In 2002 Jamerson's biographer, Allan Slutsky, produced a documentary film about the Funk Brothers, Standing in the Shadows of Motown, based on an earlier book he had written which featured interviews with Babbitt and other members as well as concert performances. The film was widely acclaimed and led to tours of America and Europe by a Funk Brothers band. The group won two Grammy awards and in 2004 Babbitt was given a Grammy lifetime achievement award. Funk Brothers continued to be in demand for recording sessions, with Babbitt playing on albums by Elton John and Phil Collins, among others. Babbitt, Jones and the guitarist Eddie Willis performed concerts to mark Motown's 50th anniversary in 2009. Babbitt also wrote a book, Awareness Guide: For Bass Players and All Fellow Musicians (2006).

He is survived by his wife, Ann, two daughters and a son. • Bob Babbitt (Robert Kreinar), guitarist, born 26 November 1937; died 16 July 2012 • This article was amended on 25 July. The title of a Stevie Wonder album, Signed Sealed and Delivered, had been given instead of that of the single Signed, Sealed, Delivered. This has been corrected.

By THE ASSOCIATED PRESS 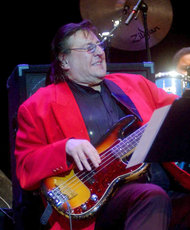 Bob Babbitt in 2003.His death was announced by Lina Stephens, the chief curator of the Motown Museum here. Mr. Babbitt’s son, Joe Kreinar, told The Detroit News that Mr. Babbitt had brain cancer.

Well known for decades among musicians, the Funk Brothers provided uncredited instrumental support to all of Motown’s biggest stars. They gained wider public recognition as the subject of the acclaimed 2002 documentary “Standing in the Shadows of Motown” and were given a lifetime achievement award at the 2004 Grammys.

Mr. Babbitt, who was born Robert Kreinar in Pittsburgh, began doing Motown sessions in the mid-1960s and continued into the early 1970s. James Jamerson was the label’s primary bassist in those years, but Mr. Babbitt provided the bass lines for numerous Motown hits, including Stevie Wonder’s “Signed, Sealed, Delivered,” the Temptations’ “Ball of Confusion,” Marvin Gaye’s “Inner City Blues” and Edwin Starr’s “War.” He later recorded with Barry Manilow, the Spinners, Alice Cooper and many others.