Phriends! It's terrifying out there! I suggest you come on in and get phreaky with some prophessionals!
This Sunday October 23, 2016
9 PM at Spirit in Lawrenceville!
242 51st Street, Pittsburgh, PA
A Rogue's Gallery of Fabulous Phreaks!
with:
Phat Man Dee (that's me!) with The Cultural District featuring:
Carlos Peña, Miguel Sague III and Langston Kelly
also showcasing:
Lilith DeVille: https://www.facebook.com/lilithdv/
The Mad Muse: https://www.facebook.com/musegonemad/
and my dear sweet husband's old fashioned future rawk band 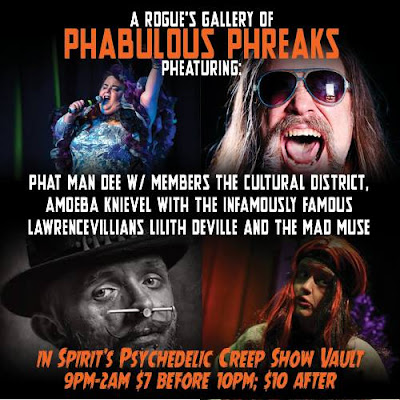 On Sunday October 29, 2016 I will be singing with Pastor Deryck Tines and the Lemington Gospel Chorale at Ebenezer Baptist Church, 2001 Wylie Ave, Pittsburgh, PA
Here's is a picture I shot of Pastor Tines when we sang at Monumental Baptist last month! 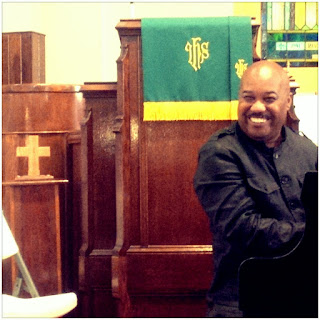 Look at that man's smile! You should hear him sing!
And I am thrilled to announce that one of my facebook April Fool's Day joke is ACTUALLY COMING TRUE!
Here is a small sampling of the jokes I made on April Fool's Day this year on my facebook page:
“OMG OMG OMG SO EXCITED!!! The Pittsburgh Cultural Trust just called me and said they ACCEPTED my proposal to host Isaly's chipped ham wrestling at PPG Wintergarten during the Three Rivers Arts Festival! Slippy the Clown (aka David Gruen) will be doing color commentary as I square off with Bill Peduto!!!!”
and “What an incredible day! Tom Savini just called me and said he was asked to do special effects for me in a new documentary zombie bio pic about me playing the role of Zoe Saldana playing Nina Simone in a new musical production called "I've Got You Under My Skins”!!!!”
and “Very excited to announce that Wendy Bell has agreed to wrestle me in Ramen noodles for a spectacular gala event and fundraiser, and all the money raised will be donated to Whaats Up Pittsburgh!!!”
AND finally : “I am so excited to announce mine and Liz Berlin's new social justice disco album!!! We will be reworking Woody Guthrie's classic works like "All You Fascists Are Bound for Hell" and Anne Feeney's "Have You been to jail for justice?" into high energy dance anthems, backed by the fusion force of Rusted Root and the Pittsburgh Symphony Orchestra!”
WHICH ONE DO YOU THINK IS COMING TRUE????? If you guessed me wrestling with Wendy Bell in a pool of Ramen Noodles....YOU WOULD BE VERY WRONG.....In fact, Liz Berlin and I have been working on a new recording project, not with Rusted Root or the Pittsburgh Symphony, but with each other! She and I have been friends for many years and I have been working for her non profit Creative Life Support for several years now as a vocal coach with students from the Allegheny County foster care system. When I tagged her in the facebook post, she was like "you know that sounds like a cool thing, we should do it!!!" and that is one of the many reasons I adore her, she could be doing a million zillion things at once, building a theater, touring with her platinum selling band, taking her side project to SXSW, teaching kids, raising her own kid, running a staff of interns who are learning the music business and she's just like "oh yeah, that sounds awesome, sure we'll do that too!" and so we've been in the studio at Mr Small's Recording and Mastering Studio in the Northside, working with some of my musicians and some of hers and we are really excited to announce that we will be digitally releasing one of them, "Fourth Reich Arising" on Halloween, Monday October 31, 2016 at the Acousticafé Open Stage at the Funhouse at Mr Smalls. We will be featured performers that night and we will do 3 selections from our new project "Social Justice Disco, Songs to Fight Fascists By"! I will send another email to my list soon about how to buy the first new single when it's released that day, and as well about the IndieGogo campaign we will be running to help us cover the expenses of recording it. It's gonna be an amazing project and I want you to know about it, but I also wanted you to have a little time to plan to come to the single release event and celebrate with us if you can make it!
The Funhouse at Mr Smalls is located at 400 Lincoln Ave, Millville, PA
No cover, sign up to perform between 6-7 pm
We'll go on somewhere in there....I don't know when, come here some local musicians and celebrate our magical musical scene!
Here's a nice picture we shot the last time we sang together on the opening weekend of The Funhouse at Mr Smalls! 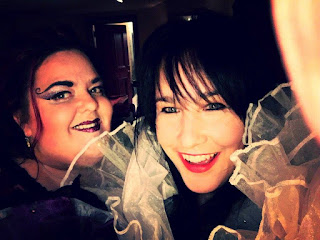 Seriously, how can you say no to these faces???? You can't. You can try, but it's not recommended. We're making songs to fight fascists by. You know you want in.... I will tell you how, soon.....
I also wish to thank you if you voted the Pittsburgh City Paper's Best of Pittsburgh Readers' Poll this year, I was voted in by the readership as #1 Best Local Jazz/ Blues Act in Pittsburgh. I am deeply humbled and will do my best to live up to the belief you have in me. I am still learning, still studying the great musical legacy we are blessed to have in Pittsburgh, rich with incredible jazz musicians and I will continue my journey to be worth of their company and musicianship. 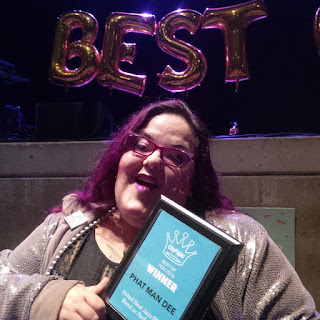 photo by Edward Pinto, shot at the Best of Pittsburgh City Paper party 2016!
Stay safe, stay loved, it's crazy out there. Don't be afraid. Make sure to vote. Ferreals. In the words of my friends at B-PEP "WE VOTE IN EACH AND EVERY ELECTION, NUMBERS COUNT!"
If you wish to get more involved in assisting with Election Protection and bearing witness at the polls, please call 1-866-687-8683
Much love, much respect, I am always yours, Phat Man Dee