AN UPRIGHT CITY: Pittsburgh and the Jazz Bass

Our city's jazz legacy is well-established. Today, being more specific, Richard Frushell honors players of the 'big wood' -- the keepers of the rhythm that Pittsburgh has produced in multitudes 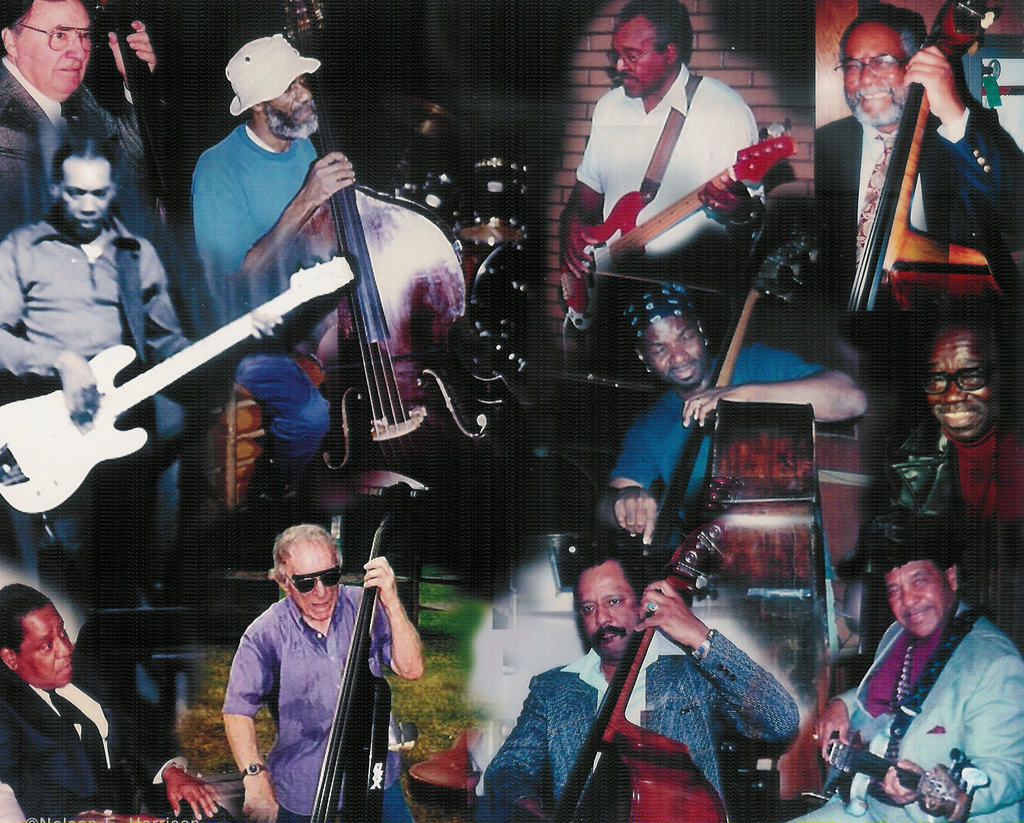 ; and for "Spring," a splendid artist with perfect pitch, Ron Bickel. I hear for the blues tune all the bassists playing the melody in unison, pizzicato thank you, with no bass line whatsoever save for Bobby's left-hand single notes. Since "Moanin" has a short call and response opening, the bassists divide themselves -- extempore, of course -- between rhythm playing and soloing. All of them play; and the logistics of who does what and when is easy for them. For "Spring" I see the arco players doing the tune's affecting melody in unison, bowed, and straight through the piece. Then I hear each player soloing, whether arco or pizzicato or bits of both. They instinctively know the firing order of playing and they know all about entrances and how and when cleanly to conclude. I'm hearing 20 minutes of the blues and 35 of the ballad. I'm happy. I'm even happier that the third generation of bassists is already here and playing, that more are on the way through the efforts of the bass and guitar institute at Duquesne, the jazz program at Pitt and the music department at Carnegie Mellon. I'm expecting at least a handful of other great bassists from non-university players of talent (men and women) who are keen to ask the question of their musical betters: "Could you show me a few things?" This is truly an upright city whose hills are in fact alive with the sound of music, and not only in the treble clef.

Richard Frushell lives in Brentwood (paxetbonum11@verizon.net). A professor emeritus of English and comparative literature at Penn State, he played bass with the DiLernia Brothers, the Hershey Cohen Big Band, the Troy Campbell Quartet and others in the 1950s and '60s.

Mr. Brenkus' widow, Eve, of Peters, said her husband had been ill since February and two weeks ago was admitted to the Donnell House Hospice in Washington County.

Even at his age, Mr. Brenkus remained active on the music scene, performing occasionally as a substitute with the Pittsburgh Boilermakers and in other jazz and Dixieland groups.

Just last month, he was awarded a prize from the American Federation of Musicians, Local 60-471, also known as Pittsburgh Musicians Union, for being the oldest working musician in the region.

Band leader and booking agent Jack Purcell, who was present at the "old-timers" party the night Mr. Brenkus received the award, said the bassist was well known and respected in the music community.

"We've known each other since the 1930s," said Mr. Purcell, 88. "We worked together a few times over the years, but I mostly booked him for jobs."

Mr. Purcell recalls booking Mr. Brenkus to perform with a Dixieland trio at the DoubleTree Hotel, Downtown. Other members of the trio were pianist Larry Ames and clarinetist Ernie Matteo.

"They were supposed to be there for 12 weeks and stayed for more than 13 years," said Mr. Purcell.

Mr. Ames, 89, who had known Mr. Brenkus since the 1940s when both men worked in the Baron Elliot Orchestra, said Mr. Brenkus was one of the finest bassists he ever played with.

"Music was absolutely his first love," said Mr. Ames, who characterized Mr. Brenkus as his closest friend. "We played so many jobs together over the years."

Mr. Brenkus grew up in Bethel Park and started playing the bass as a student at Bethel Park High School.

After graduating, he joined the Army and toured Europe during World War II with Baron Elliot as part of the 35th Special Services Company. The troupe included actor James Cagney and humorist Herb Schriner.

After his discharge, Mr. Brenkus returned to Pittsburgh and went to work at Cliff Heath Ford in the South Hills. Mr. Brenkus, who was promoted to assistant sales manager, worked at the dealership for 25 years.

But even as Mr. Brenkus sold cars during the day, he continued to play music at night.

He reconnected with Baron Elliot, whose orchestra had become the staff band on radio station WCAE-AM, now WEAE. They performed live on the air five nights a week, with a half-hour show.

The orchestra, which also played at the William Penn Hotel, West View Park's Danceland and Kennywood, was one of the first bands to make records for sale locally on several labels, including Decca and Musicraft. Their signature tune was "Stardust Memories."

But the highlight of Mr. Brenkus' career occurred in 1961, the night he backed up Judy Garland at the opening of what is now Mellon Arena.

The legendary singer-actress was in good voice, good health and was "gracious and professional with the band and audience," Mr. Brenkus once told the Pittsburgh Post-Gazette.

In addition to his wife, Mr. Brenkus is survived by three sisters, Mary Herby, of Las Vegas, Anna Herby, of Blairsville, Indiana County, and Margaret Allison, of California; two grandchildren; and several stepchildren.

No services are planned.