Chronology: In Praise of Peter and Kenny Washington

Chronology: In Praise of Peter and Kenny Washington

Thoughts on a presidential rhythm section

PUBLISHED OCTOBER 6, 2021  – BYMARK STRYKER
JazzTimes may earn a small commission if you buy something using one of the retail links in our articles. JazzTimes does not accept money for any editorial recommendations. Read more about our policy here. Thanks for supporting JazzTimes. 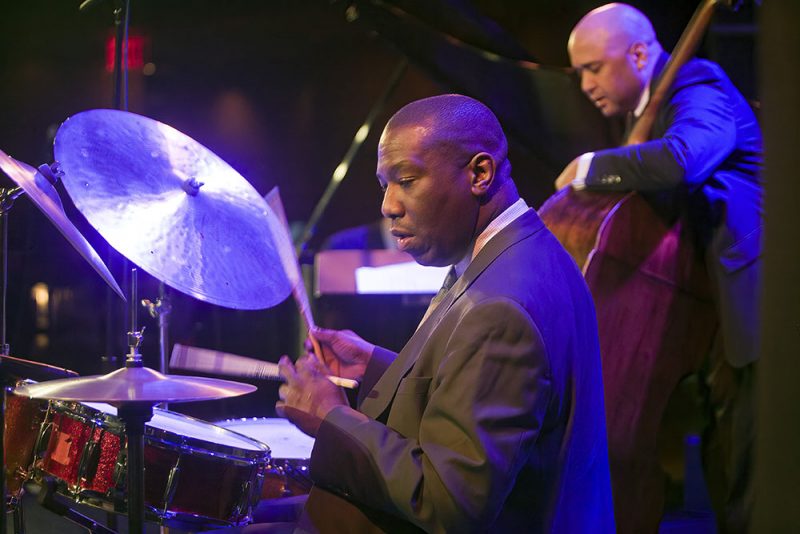 Since first sharing a bandstand in New York around 1987, they have morphed into one of the finest and most prolific bass-and-drum teams in contemporary jazz. You want your record date to sound like it was made by a working band after a three-month tour, even though it’s more likely an ad hoc group working on one, possibly zero, rehearsals? Call the Washingtons. A lot of folks already have.

The Tom Lord Jazz Discography reports that the duo has made 75 recordings together since 1988, an astounding number in an era of diminishing opportunities. Among their employers: Dizzy Gillespie, Ray Bryant, Johnny Griffin, Nicholas Payton, Lee Konitz, Andy Bey, Tony Bennett, George Cables, Gary Smulyan, and, of course, Bill Charlap, whose suave trio has included the Washingtons since 1997. The Washingtons’ discography includes 21 dates on Criss Cross, whose hard-bop/postbop house style epitomizes the essence of their aesthetic.

The virtues they bring to any gig or session include a bonded groove as strong as new rope, inexhaustible swing, fire, creativity, dynamics, taste, a halo of tonal warmth, emotional resonance, and the flexibility to adapt to anything thrown at them. Above all, a deeply informed and profound spirit of the jazz tradition pulsates through their work, expressed in personal terms and anchored in the present tense.

“They’re always swinging,” said Payton, whose Relaxin’ with Nick (Smoke Sessions) from 2019 is the most recent recording with a Washington backbone. “It always feels good. They figured out early in their association that lock-up, that sync, and that’s why they’ve been hired and treasured by the greatest practitioners of this music. They’re incredibly consistent, with a high level of finesse and mastery.”

For a demonstration, try “Afternoon in Paris” from Reunited (Criss Cross), recorded in 1995 by the underrated late pianist Richard Wyands, a wise storyteller. The trio sounds as tight as family. Kenny and Peter are tippin’—articulating the time and swing lightly but firmly, as if the beat were dancing on air. The routine is not unexpected: a supple two-beat bounce over brushes transitioning into a finger-popping stroll in four with sticks. But execution is at the highest level, alive with individualized personality. Somewhere the ghosts of Doug Watkins and Arthur Taylor are smiling.

Peter and Kenny feel the beat in the same place. I’d call it on top of the middle. Neither behind the beat nor in front of it, they’re still up on its ass, driving the music forward without breaking a sweat. Truism: The more you relax, the harder you can work. They have an infinite number of gears in terms of volume and intensity (not the same thing). At the top of Wyands’ climactic third chorus, he glides into a block-chord tremolo that prompts the Washingtons to dig deeper. You almost feel it more than you hear it. Kenny’s hi-hat and ride cymbal snap a bit harder. Peter’s walking lines move into more dramatic melodic and rhythmic territory.

Their solos are clinics. With a seductively purring tone and pinpoint intonation, Peter’s serpentine lines reveal a melodic depth superior to that of most horn players. Kenny’s soft-shoe with brushes, delivered with a distinctive timbre, pearly in its touch, puts an elegant spin on composer John Lewis’ cosmopolitan lyricism.

“We listened to the same records growing up and had the same conception of how we wanted to play this music,” Kenny said. “We were going for the quality of those bass-and-drum teams from the 1930s, ’40s, ’50s on up. We both idolized Milt Hinton and Osie Johnson, Paul Chambers and Philly Joe Jones, Doug Watkins and Louis Hayes, Doug Watkins and Elvin Jones, Israel Crosby and Vernel Fournier—people like that.”

Peter picks up the thread: “KW and I like a lot of the same music. The blues, Charles Brown, Jimmy Witherspoon, Oscar Moore and Johnny Moore, Kenny Burrell, so-called Swing Era music, older tenor players, Hank [Jones], Tommy [Flanagan], and Barry [Harris]. There was a lot of common ground and a lot between us went unspoken and still does.”

Peter and Kenny feel the beat in the same place. I’d call it on top of the middle.

Though associated with the swinging mainstream, the Washingtons can go in more directions than many critics—and musicians—imagine. Relaxin’ with Nick finds Peter and Kenny in an open-on-all-sides trio. Payton, an invigorating trumpeter, also doubles on piano, Fender Rhodes, electronic effects, and samples. The band explores an encyclopedia of contemporary Black American Music rhythms, backbeats, textures, and even-eighth-note grooves: funk, fusion, hip-hop, postbop swing, and more. Peter and Kenny (and Payton) play the hell out of it all. It’s especially rewarding to hear the drummer bring his elevated musicianship to the loose, aggressive, and splashy rock beat on “F (for Axel Foley).”

You might think such an expansive discography, sustained excellence, and peer respect would translate into celebratory ink in the jazz press. Yet Kenny has had only a small handful of features devoted to him during his long career, and Peter has had … [checks notes] … ZERO articles written about him in JazzTimes or DownBeat. This despite being the most recorded bassist of his generation—nearly 500 sessions—and an indisputable master.

What gives? The truth is that an obsession with the new, the novel, and the young often blinds the press to standout veterans devoted to finding fresh avenues of expression within the core tradition, particularly in an era when the African-American values of swing and blues feeling are naively considered passé in some quarters. Moreover, the subtleties of great rhythm-section playing simply elude many critics. There is nothing old-fashioned about the Washingtons. They aren’t journeymen either. They are state of the art.

Ray Bryant featuring Kenny Burrell: No Problem (EmArcy)
Soulful work from Bryant and Burrell in 1994 with ideal, inspired support from the Washingtons.

Andy Bey: Ain’t Necessarily So (12th Street)
A 1997 live date by an affecting, plummy-voiced singer and pianist framed beautifully by the Washingtons.

Mark Stryker is the author of Jazz from Detroit (University of Michigan Press), named Jazz Book of the Year in the 2019 JazzTimes Critics’ Poll. Inducted into the Michigan Journalism Hall of Fame in 2020, Stryker covered jazz, classical music, and visual arts for the Detroit Free Press from 1995 to 2016. He also grew up working as a jazz alto saxophonist.