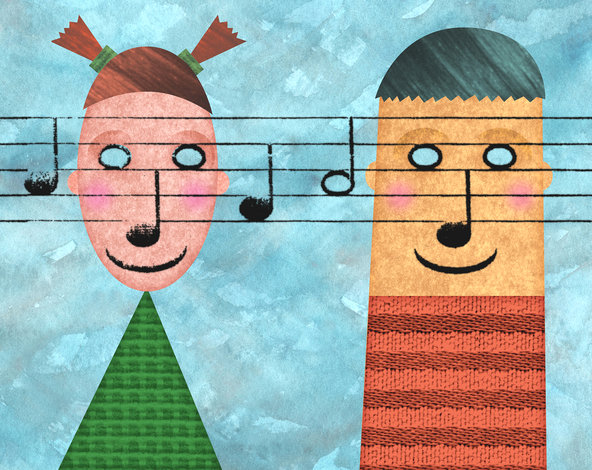 When children learn to play a musical instrument, they strengthen a range of auditory skills. Recent studies suggest that these benefits extend all through life, at least for those who continue to be engaged with music.

But a study published last month is the first to show that music lessons in childhood may lead to changes in the brain that persist years after the lessons stop.

Researchers at Northwestern University recorded the auditory brainstem responses of college students — that is to say, their electrical brain waves — in response to complex sounds. The group of students who reported musical training in childhood had more robust responses — their brains were better able to pick out essential elements, like pitch, in the complex sounds when they were tested. And this was true even if the lessons had ended years ago.

Indeed, scientists are puzzling out the connections between musical training in childhood and language-based learning — for instance, reading. Learning to play an instrument may confer some unexpected benefits, recent studies suggest.

We aren’t talking here about the “Mozart effect,” the claim that listening to classical music can improve people’s performance on tests. Instead, these are studies of the effects of active engagement and discipline. This kind of musical training improves the brain’s ability to discern the components of sound — the pitch, the timing and the timbre.

“To learn to read, you need to have good working memory, the ability to disambiguate speech sounds, make sound-to-meaning connections,” said Professor Nina Kraus, director of the Auditory Neuroscience Laboratory at Northwestern University. “Each one of these things really seems to be strengthened with active engagement in playing a musical instrument.”

Skill in appreciating the subtle qualities of sound, even against a complicated and noisy background, turns out to be important not just for a child learning to understand speech and written language, but also for an elderly person struggling with hearing loss.

In a study of those who do keep playing, published this summer, researchers found that as musicians age, they experience the same decline in peripheral hearing, the functioning of the nerves in their ears, as nonmusicians. But older musicians preserve the brain functions, the central auditory processing skills that can help you understand speech against the background of a noisy environment.

“We often refer to the ‘cocktail party’ problem — or imagine going to a restaurant where a lot of people are talking,” said Dr. Claude Alain, assistant director of the Rotman Research Institute in Toronto and one of the authors of the study. “The older adults who are musically trained perform better on speech in noise tests — it involves the brain rather than the peripheral hearing system.”

Researchers at the University of California, San Francisco, are approaching the soundscape from a different point of view, studying the genetics of absolute, or perfect, pitch, that ability to identify any tone. Dr. Jane Gitschier, a professor of medicine and pediatrics who directs the study there, and her colleagues are trying to tease out both the genetics and the effects of early training.

“The immediate question we’ve been trying to get to is what are the variants in people’s genomes that could predispose an individual to have absolute pitch,” she said. “The hypothesis, further, is that those variants will then manifest as absolute pitch with the input of early musical training.”

Indeed, almost everyone who qualifies as having truly absolute pitch turns out to have had musical training in childhood (you can take the test and volunteer for the study at http://perfectpitch.ucsf.edu/study/).

Alexandra Parbery-Clark, a doctoral candidate in Dr. Kraus’s lab and one of the authors of a paper published this year on auditory working memory and music, was originally trained as a concert pianist. Her desire to go back to graduate school and study the brain, she told me, grew out of teaching at a French school for musically talented children, and observing the ways that musical training affected other kinds of learning.

“If you get a kid who is maybe 3 or 4 years old and you’re teaching them to attend, they’re not only working on their auditory skills but also working on their attention skills and their memory skills — which can translate into scholastic learning,” she said.

Now Ms. Parbery-Clark and her colleagues can look at recordings of the brain’s electrical detection of sounds, and they can see the musically trained brains producing different — and stronger — responses. “Now I have more proof, tangible proof, music is really doing something,” she told me. “One of my lab mates can look at the computer and say, ‘Oh, you’re recording from a musician!’ ”

Many of the researchers in this area are themselves musicians interested in the plasticity of the brain and the effects of musical education on brain waves, which mirror the stimulus sounds. “This is a response that actually reflects the acoustic elements of sound that we know carry meaning,” Professor Kraus said.

There’s a fascination — and even a certain heady delight — in learning what the brain can do, and in drawing out the many effects of the combination of stimulation, application, practice and auditory exercise that musical education provides. But the researchers all caution that there is no one best way to apply these findings.

Different instruments, different teaching methods, different regimens — families need to find what appeals to the individual child and what works for the family, since a big piece of this should be about pleasure and mastery. Children should enjoy themselves, and their lessons. Parents need to care about music, not slot it in as a therapeutic tool.

“We want music to be recognized for what it can be in a person’s life, not necessarily, ‘Oh, we want you to have better cognitive skills, so we’re going to put you in music,’ ” Ms. Parbery-Clark said. “Music is great, music is fantastic, music is social — let them enjoy it for what it really is.”

This post has been revised to reflect the following correction: