Though the skies over Pittsburgh may be attempting to belie the truth, spring is here and for Phat Man Dee that means fabulous events, grand openings, social justice disco and more!
Join us this Friday April 8 when Lawrenceville's hottest concert hall and pizza palace, Spirit, turns 1 year old! 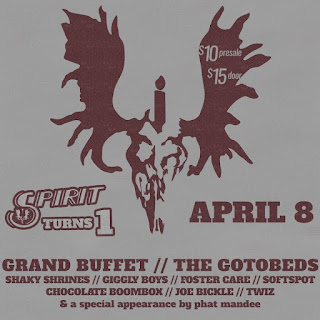 For a venue which gives life to psychedelic haunted mazes and the best pizza below Butler, I cannot wait to see what their next year will bring! I am singing at midnight, but get there early to catch all the performances by Pittsburgh underground icons as Grand Buffet, The Gotobeds, Jordan Weeks, FOSTER CARE, Shaky Shrines, SOFTSPOT, Giggly Boys, TWIZ (AKA Old Dream)!
More info and ticket link: FB page: https://www.facebook.com/events/1032252676864010/Tickets ($10 adv, $15 day of) : https://spiritpgh.yapsody.com/event/index/35695/spirit-turns-1Spirit is located at 252 51st St, Lawrenceville, Pittsburgh

To see more of what I have been spending my time on, please come out on Tuesday April 12 to Pittsburgh Filmmakers Melwood Screening Room for Film Kitchen! Join us for a magical evening gazing at the silver screen, munching popcorn and laughing together, at one of the nation's oldest film collective's theatre! Hosted by local filmmaker and cinemagraphic whiz kid Matthew R. Day, originator of such roles as Julius Duvatine and Squirellilla, this evening is sure to amaze and delight!

This series features the work of local movie makers and this month they are screening my work from "Take it to the Bridge with Phat Man Dee", as well as the world premiere of Amoeba Knievel's new music video "Cowboy Ed and the Caterpillar".

Movies to be featured include video from my international musical series includes musical duets with musicians and dancers on bridges all over Europe! See Phat Man Dee sing with musician Nik Phelps in Belgium! See her scat with Moe Seeager in Paris! Sing for dancer Wonderful Ginger in Rome! Get down with the Church of Malcolm in Scotland! Sing gospel with Tracey Adele Cooper and Jodi Phlegar in Germany! Sing with Jake Goldwasser at the World Body Painting Festival in Austria! Sing in view of the basilica with Daniele Mutino, accordionist and singing story teller! Also presenting #new and #unseen footage!!!  Video shot and edited by both Take it to the Bridge with Phat Man Dee and Alistair McQueen of Smoke This Productions. Anthing else could happen as well, so don't miss it! And don't be late, or you'll miss all the beer!
Showtime 7 pm. Only $5! All ages!
Pittsburgh Filmmakers Melwood Screening Room is located at 477 Melwood Ave, Pittsburgh!


April 16 JUST ANNOUNCED! I will be performing at the new venue in Mr Smalls theater, an intimate 150 seat, limited capacity venue called "The Funhouse at Mr Smalls". I will be sharing the bill with Liz Berlin of Rusted Root! We will be performing our own sets and then, because sometimes not only dreams, but April Fools jokes really do come true, Liz and I will be performing a set of of social justice songs for a new genre we are defining called "Social Justice Disco".....  I can see this needs some explaining.... On April 1, this year, on my private FB page I made a series of ever more bizarre announcements, ranging from announcing that concert promoter Brian Drusky and I were going to get married while my current husband Tommy Amoeba would don my old half man-half woman sideshow costume and be both ring bearer and flower girl.... I then later said Wendy Bell and I were going to wrestle in Ramen noodles and donate the $$ to Wwhats Up Pittsburgh? and then I said I would be playing Zoe Saldana, playing Nina Simone, in an up and coming zombie documentary bio pic called "I've Got You Under My Skins"....I think in one update I  may have challenged Mayor Peduto to a round of Isaly's Chip Chopped Ham Wrestling during the Arts Festival.... and in there was the announcement that Liz Berlin (who is my boss at We Rock Workshop) and I were working on a Social Justice Disco album with the Pittsburgh Symphony and members of Rusted Root.... so what happens but Liz texts me and is like "yeah, we should absolutely do that!" While we have not gotten the symphony or any other members of Rusted Root on board yet, the music won't be stopped! Liz and I intend to work on Anne Feeny's "Have You Been to Jail for Justice" and Billy Bragg's and Woody Guthrie's "All You Fascists are Bound for Hell" and They Might Be Giant's "Your Racist Friend"..... So, I am not sure about times, or ticketing info or anything, I will put it all up on my calendar when I get the info, so check my web calendar closer to the actual date and stay tuned on my twitter and fb pages.....

I am thrilled to say I will be singing at a most nefarious wedding of 2 very old friends of mine, Mr Arm and Velda Von Minx of Trundle Manor! 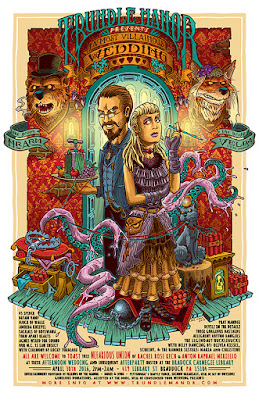 It's a day long festival, and its open to the public. It will be unlike any wedding you have ever seen before! More info on the wedding registry and event itself: http://trundlemanor.com

Saturday May 14, 2016! Buy your tickets in advance, (from me if possible) to this year's Morose and Macabre's Atrocity Exhibition VIII: Jabberwocky!!!!! I am thrilled to be part again of Morose & Macabre's annual cavalcade of the beautiful and bizarre. The Atrocity Exhibition promises to create an immersive theater experience that tells one horribly wonderful story through the art of nationally recognized sideshow, burlesque, and cabaret entertainers. The Atrocity Exhibition is also host to an array of exhibiting artists and artisans for those of a darker sensibility.  This year, the event takes us to a place where innocence is lost, nothing is as it seems, no one can be trusted, and most importantly, there is no way home.

The Atrocity Exhibition takes place at the Rex Theater, 1602 E Carson St, South Side, Pittsburgh
Over 21, advance tickets STRONGLY recomennded
FB event page: https://www.facebook.com/events/202893563404804/
9:00 GENERAL ADMISSION - 21 AND UP ONLY
$15 IN ADVANCE - $17 NIGHT OF SHOW
For ticketing and information visit: WWW.MOROSEANDMACABRE.COM

Save the date!!! May 27, 28, 29 I will be heading south to Asheville, NC to perform in the 10th Annual Americana Burlesque and Sideshow Festival known as "ABS...! I will be singing in the gala event on Saturday night at the Orange Peel, and I will be emceeing and singing at the Sunday morning Burlesque Brunch with my old friend th' Bullfrog Willard McGhee, as we celebrate the feminine (and possibly masculine) divine in a sea of sacred mimosas and tassel twirling! Join us for a weekend of amazing performances, workshops, vendors and community! For schedule and ticketing info: http://www.absfest.com/schedule/

That's it for now folks! Except, please, for the love of all that is holy, get to the polls and vote.... I don't want to tell you who to vote for, but I don't mind sharing that I am absolutely voting for John Fetterman, currently mayor of Braddock, PA, for his bid in the senate race of Pennsylvania and I am also strongly supporting Bernie Sanders for his presidential bid. We need to continue supporting change and evolution, and I am all about rebuilding infrastructure, health care and education for all.
Tomorrow is not promised, friends, we must work for it!

Love, power, compassion, thank you for being in my world, Mandee