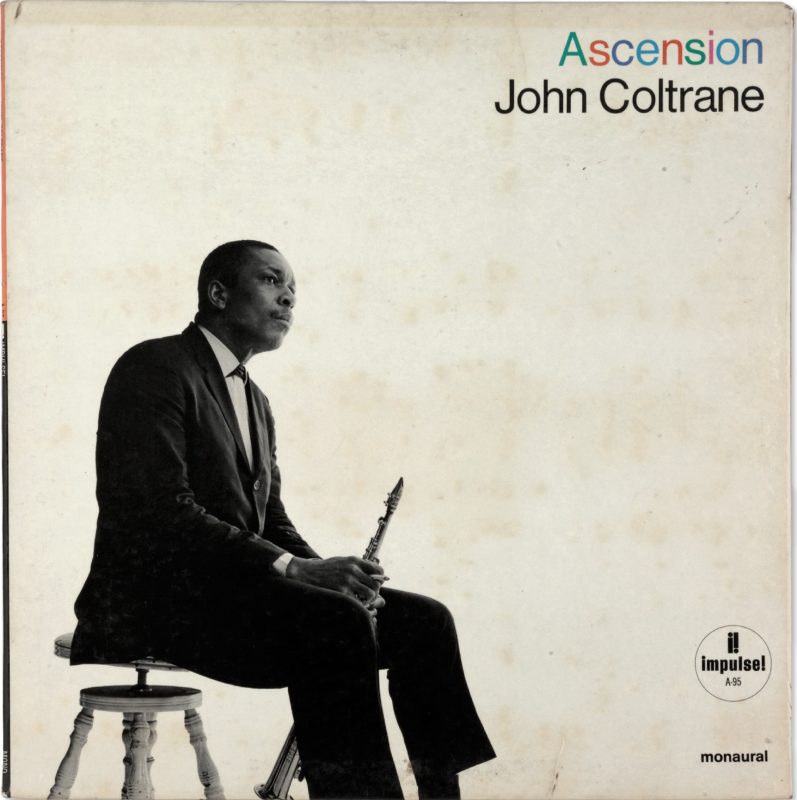 Conventional wisdom—and many people’s understanding of jazz history—asserts that John Coltrane’s A Love Supreme is the saxophonist’s masterpiece. Recorded in a single session with his indomitable Quartet on December 9, 1964, it almost makes sense as a variety of Christmas disc, an offering from the mind and soul of the true artist to a power beyond. It’s numinous but not preachy, and simultaneously as secular as cutting through an alley to get to the bar faster.

The turnaround from studio to factory to shelves was swift. By January of the new year—which proved to be Trane’s fieriest annum—A Love Supreme was in record stores. Even though Coltrane had already been many places jazz musicians had not previously, something about the album felt different. Like the apex, the high-water mark. But we must be careful not to confuse a high-water mark with an end, or a crowning. Its creator saw but a door—and a new direction—instead. A challenge to extend and advance and even, dare I say, improve upon a recording that many will tout as a medium’s finest. That was the Coltrane way: out with the new, in with the new new.

The Quartet itself was starting to crack as a going venture circa Christmastime 1964; not because it was running out of things to say, but rather because of Coltrane’s imperishable credo that he was finding new ways to speak. A Love Supreme has the air of a group performing at its own funeral—or, if not the actual service, then a rehearsal for one, testifying, in their own musical words, to what made them so special. It’s only art that lives forever, not bands.

Often when we say, “This is [enter greater superlative] than that,” one thinks the latter work has been run down in some fashion. There’s no running down of A Love Supreme; its sublimity is unimpeachable, as much a law of the universe as boiled water turning into gas. But what I would suggest is that John Coltrane never made rawer, realer, rip-your-face-off-and-pull-out-who-you-really-are art than his infamous Ascension date from June 28, 1965. In its tonal ferocity, it’s merciless and yet, paradoxically, laden with that self-same quality that is the balm for all human suffering: mercy sprung from the well of compassion, understanding, and intimate communal byplay.

We could say that A Love Supreme is akin to Coltrane’s version of a painting from Picasso’s Blue Period, whereas Ascension is the foray into synthetic cubism in auditory form, a dance of fractals and ghost-shapes whose exact identities elude us at first but come clearer in time. The music of the latter harrows. Puts us on edge. It can appear as though it is asking us to participate in the making of its own identity by listening in a certain way that reaches out for the notes themselves as the music lays its hands on us. There is nothing like it in jazz, nor is there anyone else who could have made it save this artist who’d long before embarked on a journey that had taken him to A Love Supreme, and now he was continuing to search, because a searcher is what he ultimately was more than anything else.

Many jazz records, of course, are made at a single session. The band comes in, the members likely having studied some head charts in advance; warmups and rehearsals are taken, the board is turned on, and takes are tried, realized to satisfaction, and released.

Coltrane, though, was the master of the epic session that tilts history—the date that, when we look back on it later, leaves us incredulous that something so seismic could have occurred in the space of a human afternoon. The diurnal has gone epochal. The Quartet is cleaving in the spring of 1965, but in that fracturing, room is created for the ingress of other forces—that is, players to augment a protean core and restock it with ingenious new blood. Coltrane didn’t sit around and wait for inspiration to hit. The superior artists never do. They go out and find what they wish to make, and then make it by taking it.

The Quartet had one of the last gatherings of the original tribe in May 1965 when they fleshed out The John Coltrane Quartet Plays—the title a pointed, summarizing statement of truth—whose initial sessions dated back to February. The album is akin to a deep breath before the deeper plunge, with “Nature Boy” a cooling factor and “Song of Praise” a post-Love Supreme glory-giving. And then, it was time to take some heads off.

Coltrane could do no critical wrong after A Love Supreme, so leave it to him to create Ascension. Trane was a Dantean artist, and as with the Italian poet’s Divine Comedy, the jazz master understood the importance and immediacy of procession and progress. His finest works are self-contained, but they also register like they’re forever unfolding in real time. The best fiction writers compel their characters to make decisions, and the reader chooses along with them. Coltrane’s visionary music functions the same way—listeners feel as if they’re complicit in the vital decisions of a life well-lived. Or one that could be.

The music was to be a volatile, modernistic variant on the big-band days of yore, and oriented around dialogue, the very root of jazz.

His musicians forgather at the Van Gelder Studio in Englewood, New Jersey on June 28. Four days later, Coltrane is to appear at Newport, but the music cut here will not be making the journey to Rhode Island. The moment is everything, as a moment of artistic creation needs to be if the art is to last.

The stalwart men of the Quartet are present and ready to go, some more than others: Elvin Jones on drums, McCoy Tyner on piano, Jimmy Garrison with his bass. The new recruits are all younger than Trane. Archie Shepp, Pharoah Sanders, Marion Brown, and John Tchicai are primed to heat-blister the walls of the studio on their tenor and alto saxophones; Art Davis—who knew a thing or two about sticking his nose in with vanguard composers—complements Garrison on bass; and Dewey Johnson and Freddie Hubbard perform trumpet duties, an instrument that’s gone missing from Coltrane sessions since the Miles Davis days.

Drummer Rashied Ali is asked to perform but declines, and comes to regret it forevermore. Tenor saxophonist Frank Wright is also extended an invite, but reportedly says “no más” before getting started, thinking his playing wasn’t up to the technical demands Trane was imposing on his guys.

Coltrane definitely had an idea of what he wanted, though he was still working it out, adapting on the fly at the session. Each musician was given lead sheets and some marching orders for the unrehearsed date: The music was to be a volatile, modernistic variant on the big-band days of yore, and oriented around dialogue, the very root of jazz. Soloist and ensemble would engage in conversation, the soloist playing his line, the group riffing off of it, with sections of crescendi and decrescendi bookending each individualistic flight.

This is the loudest acoustic jazz, for my money, there has ever been. It’s shockingly loud. What’s more, it never lets up. To listen to the two takes of Ascension that this unit recorded is to be tasked physically as you sit in your chair. Those Basie and Ellington big bands that Coltrane is building off of would tucker out the dancers who’d come to see them, but we’re dancing cerebrally with Ascension. There are no slow dances, and we’re not allowed breathers.

Marion Brown reportedly said later that the musicians were actually screaming as they played, and he couldn’t understand how those screams didn’t appear on the tape, as if a skillful engineer had sliced away the evidence. Perhaps the recollection is apocryphal, but it tracks: Ascension is music to bellow to, part Munch’s The Scream figure via postmodern big band, part Whitman’s barbaric yawp amplified to a pitch that could strip the soil from the earth and the epipelagic zone off the sea.

The idea of controlled, elegant cacophony is central to Ascension. Elvin Jones will lose his shit at the conclusion of the second take, throwing his snare at the wall in frustration. Brown cited “ecstasy and emotion,” and as in music, as in life—both can get the better of us, work our nerves, break us and remake us.