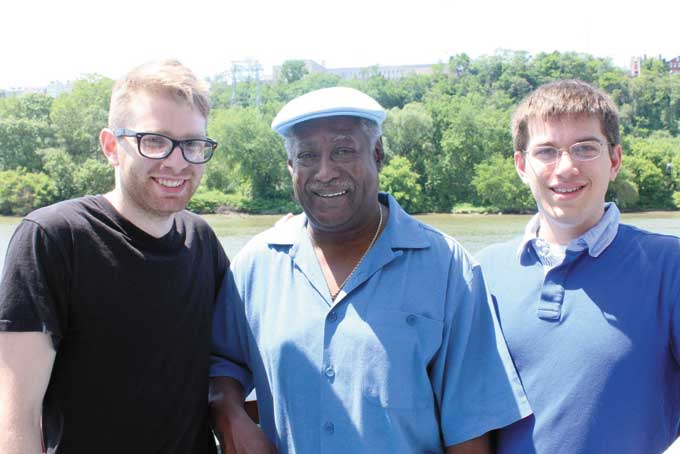 Scholarship winners with Roger Humphries, center, are Sam Harris, left, who won the scholarship two years ago, and Eli Naragon right, who received a scholarship this year. Naragon graduated from Winchester Thurston High School and will be attending Oberland Conservatory.

Attendees from near and far were treated to a nice relaxing afternoon cruising the Three Rivers with jazz flowing as smoothly as the water of the # rivers for the annual Jazz on the Water Boat Ride given by legendary drummer Roger Humphries.

For more than three decades, Humphries has been holding the boat ride and has been allocating the proceeds to help benefit the Roger L. Humphries Sr. Musical Scholarship Fund.

mething to the kids,” said legendary drummer Humphries. “Over the years the talent has gotten better. It’s great to see so many people here to celebrate this.”

Humphries enlisted the help of Flo Wilson and the Old School Band, and the Latin band, Azucar, as well as his own RH Factor Band to create the music for the trip.

Some of Pittsburgh’s elite jazz musicians and politicians were on hand to share in the festivities.

“Roger’s music keeps me coming back and the scholarship fund because he is always giving back to kids and you’ve got to support that,” said former Pittsburgh Councilman Sala Udin who has attended six or seven of Humphries boat rides. “The crowd continues to grow, the music continues to expand and Roger keeps getting better and better.”

“This is a tradition and I’m here to support Roger. What’s so beautiful is that you see so many people here who are supporting him. It’s all about family with Roger: his musical family and his cultural family,” explained Jackson who did the documentary “Pass it On,” which chronicles Humphries’ life and highlights the scholarship boat ride.

“I’ve attended almost all of the boat rides that Roger has had and each year we had to move to a bigger boat to accommodate people. As Roger added multi-cultural music to the line up, that also increased the audience because each group brings its own following and the scholarship is a good thing because it goes towards the kids’ education,” said James Humphries.

Roger Humphries estimates that he has been able to give about $300 in scholarship money to each student.

The amount of the scholarship is not what made Winchester Thurston graduate Eli Naragon want to apply for it this year, but it was Humphries’ influence on Naragon’s musical life.

“Ever since I was in middle school, Mr. Humphries would come to Winchester Thurston to help kids. He’s been great with advice and I’ve gotten the chance to go to CJ’s and sit in with his band, and I’ve been playing around the city,” said Naragon, an 18-year-old Mt. Lebanon resident who will be attending Oberlin Conservatory for music in the fall. He plays bass—electronic and upright—as well as the cello.

“I’ve learned that the best teaching happens on the band stand. Roger taught me how to let go and to speak through your instrument, because that’s what he does. No one else can do that like Roger,” Naragon continued. “Roger leaves for the music. He’ll play no matter what.” Naragon aspires to play for a symphony orchestra and have his own band once he graduates from college. “I want to make my life playing music. I wouldn’t be here without the help of all of my music teachers.

” Humphries felt Naragon was the perfect musician to secure the 2014 scholarship.

“Eli is a very talented young man. We didn’t have that many entrants from CAPA this year,” Humphries said. “If you don’t have the discipline and heart to play an instrument, it’s hard to play that instrument. But Eli has that discipline and heart. It’s important to mentor the kids and I’m proud when they want to continue their education.”

“Roger constantly passes on his knowledge to people,” said Samuel Harris, who received Humphries scholarship two years ago. The 20-year-old Point Breeze resident has been playing the bass since fourth grade and met Humphries while Humphries taught at CAPA and he was a student there.

“I got Roger’s sound in my ears and I wanted that sound. I couldn’t ask for a better musical parent,” continued Harris, who is studying musical performance at Temple University. “In Pittsburgh all musicians are family and they care about each other. This is my second time attending the boat ride and it’s always fun.”

“This is one of the most memorable trips down a body of water,” said James Haynes, owner of Cleveland’s Faith Community United Credit Union. “I’ve been up and down the Allegheny a lot and this is one of most enjoyable. I can’t wait until next year.” People on the dance floor as the boat ride comes to an end. You were missed Rich.

Sorry I had to miss this one