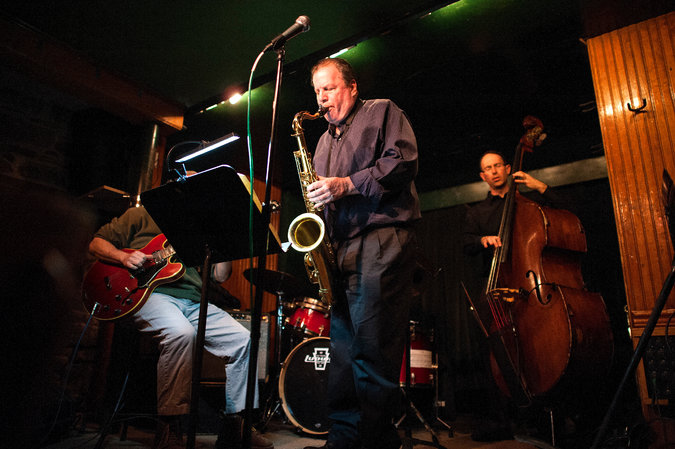 John Richmond on stage at the Turning Point. Credit Gregg Vigliotti for The New York Times

The drummers Eliot Zigmund and Richie Morales are known for their performances on the world’s big stages — Mr. Zigmund with cool-jazz innovators like the pianist Bill Evans and the trumpeter Chet Baker; Mr. Morales with fusion pioneers like the guitarist Al Di Meola and the group Spyro Gyra.

So it was something of a surprise to see Mr. Zigmund and Mr. Morales taking turns behind the drum set on a Monday night last month at the Turning Point, an unassuming nightspot in the sleepy Rockland County village of Piermont.

But for these men, it was part and parcel of the jazz life. Six-night engagements, three-set nights and wee-hours jams are on the wane at Manhattan clubs, they said. That adds up to less bandstand time, even for established musicians — many of whom are quietly gravitating toward places like the Turning Point to help keep the artistic juices, and in some cases the money, flowing.

“When it comes to jazz,” Mr. Zigmund said, “it’s hard to make a living. A lot of guys you wouldn’t expect will go out and make 50 bucks, a hundred bucks to play, for a meal and for a social occasion. It’s something you never get enough of.” 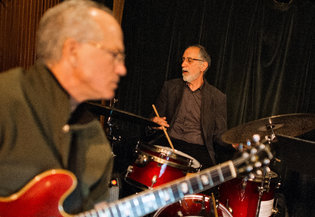 At the Turning Point, a small scene has coalesced around the saxophonist John Richmond, a doctor who is the chief organizer and underwriter of Monday night sessions like the one at which Mr. Zigmund and Mr. Morales found themselves.

Before he practiced medicine, Dr. Richmond made a splash as a musical sideman and sometime bandleader in the 1980s, playing Greenwich Village clubs like the Blue Note, Sweet Basil and Seventh Avenue South, and recording alongside high-profile musicians like the saxophonist Joe Lovano, the bassist Ray Drummond and the drummer Billy Hart.

Toward the end of the 1980s, he began to pursue a medical career and disappeared from the musical swim, emerging in 2006 as a radiologist seeking to dive back in. Looking for a springboard near his home in Bergen County, N.J., he focused on the Turning Point. Though the room was better known for folk than jazz, the proprietor, John McAvoy, was a longtime friend. On hand before the set last month, Mr. McAvoy said he had been glad to reserve Mondays for Dr. Richmond. 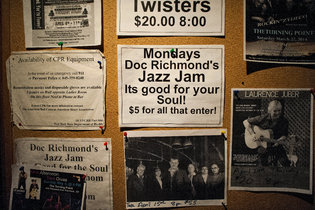 Posters near the club’s entrance. Credit Gregg Vigliotti for The New York Times

Drawing largely from old contacts who had moved from New York City to the lower Hudson Valley or northern New Jersey, Dr. Richmond began producing the Monday jams with a core group of musicians in October 2007.

As word spread, he added occasional Sunday concerts to the programming, sometimes expanding the roster beyond that core. Between the jams, the concerts and the odd one-off booking, he has attracted an array of prominent artists, among them the guitarists Les Paul (who died in 2009), Stanley Jordan and John Abercrombie and the saxophonists Dave Liebman, Sonny Fortune and Mr. Lovano.

The session last month constituted a revival of sorts after a series of snow-related cancellations, and attendance at the start of the set was sparse. But the evening’s house band — David Kingsnorth on bass, Dan Petrow on guitar, Mr. Zigmund and Dr. Richmond — quickly warmed to the occasion, opening with a Thelonious Monk tune, “Monk’s Dream,” and a C minor blues, “Equal Knocks,” a mid-’80s Richmond homage to John Coltrane’s “Equinox.” The band was soon cooking, and the small, rough-hewed room started filling with listeners and musicians. 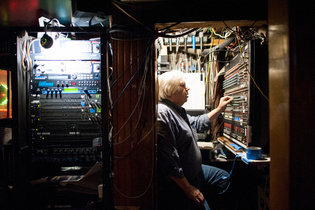 The opening set proved prelude to a more expansive second act involving about a dozen additional musicians, all seeking to join the proceedings onstage. Along with the experienced professionals like Mr. Morales, they included aspirants like Jeremy Katell, 25, a tall baritone saxophonist from Scarsdale who said he first attended a Monday night session in December.

An information technology worker who does not claim membership in the professional jazz fraternity, Mr. Katell nonetheless demonstrated control of his big horn and no small mastery of the jazz language, contributing clear-toned, concise improvisations that caught the ear of veterans in attendance.

As the session unfolded and the musicians worked through the standards “Have You Met Miss Jones,” “Alone Together,” “I’ll Remember April” and “East of the Sun,” Mr. Katell was not the only young player to impress. Loosely structured, the session ultimately became a kind of workshop at which people vied for a chance to play with a rhythm section propelled by Mr. Zigmund or Mr. Morales and a front line led by Dr. Richmond. They, in turn, expressed a measure of satisfaction with the overall sound, despite the random nature of the aggregation producing it — a mix of generational sensibilities and instrumental coloration that at one point included players of brass, woodwinds, guitars, keys, bass and drums.

Keeping it all going has not been easy. While Dr. Richmond said that the interest among musicians was generally strong, he acknowledged that the enterprise was a “struggle” to maintain economically. The small cover charge sometimes failed to meet expenses, he said, and the brutal winter did not help, depressing business at the Turning Point, as elsewhere.

But, Dr. Richmond said, the sessions are on track. The guitarist Bob Devos and the bassist Bill Moring, who both have played with Dr. Richmond at Zinc Bar in Manhattan, are among those booked for the Monday house bands this month. And the club has scheduled a Sunday evening concert on May 18 with the baritone saxophonist Gary Smulyan, a perennial poll-topper, who is enlisting Dr. Richmond’s old associate, Mr. Drummond, as his bassist.