With a song in his heart, West has entertained thousands for decades

By PAULA A. SMITH Correspondent

West, 84, and his great nephew Cameron Nino performed recently at the Village of Pennwood personal care home in Wilkinsburg. 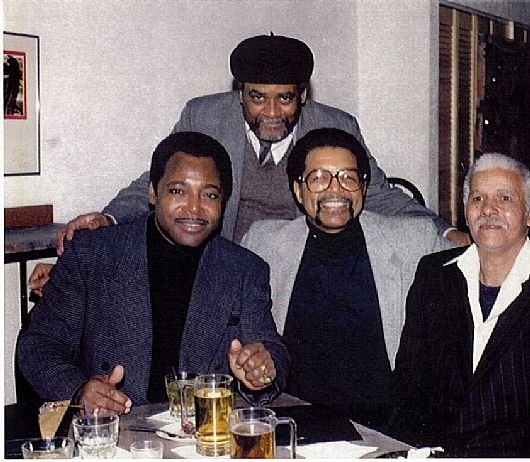 To many former doo-woppers, Jimmy Talifaro West, 84, is a Wilkinsburg legend. For years he has been entertaining and performing for senior citizens at Lemington Center in Pittsburgh’s East End. Accompanied by a talented group of professional musicians he assembles, he sings the songs of their youth.

“I enjoy doing it,” said West, who was born and raised in Wilkinsburg and is a parishioner of St. Charles Lwanga in Pittsburgh’s East End.

“The people love it. In their mind they go back to that time when things were jumpin’.”

From the 1920s to the 1960s, innovative musicians were instrumental in shaking up the Steel City. Fans were jumping, swinging, rocking and tapping to sounds of classical, country, doo-wop, jazz and rhythm and blues. Big names that included Duke Ellington, Mary Lou Williams, Benny Goodman, Ella Fitzgerald and Cab Calloway were hitting high notes in crowded night clubs, dance halls, ballrooms and theaters.

As the fifth of 10 children of Isaac and Eleanor Elizabeth West of 1613 Hunter Street in Wilkinsburg, West grew up in a musical city and home. Eleanor was the inspirational one in the family and the “main mother” on the block from 1937-88. He and his mother sang together while she played the piano at St. Mark AME Church and Mount Calvary Baptist Church, both in Wilkinsburg.

“Jimmy found his true love for music at an early age sitting at a piano with his mother and he took up singing as a career,” said Preston “Pep” Stitt, who has known West since 1942. They grew up together as next-door neighbors.

“He’s still singing to this very day,” Stitt said. “In music you only have to have the heart to sing your song. And God gave him that gift.”

West and Stitt attended Simple School in Wilkinsburg when there were no more than one or two black students in a class of 20. Stitt’s family and others came from the South. He recalled that teachers taught students the “King’s English” (named for King George VI) that stressed good diction.

At 9, West suffered a serious sledding accident and was sent to a rehabilitation facility. At 14, he was singing a different tune after hearing Billy Eckstine, a famous American Jazz singer and bandleader, sing “Blue Moon.” Eckstine appeared with Miles Davis and Dizzy Gillespie at the Syria Mosque in 1946.

“It made a great impression on me,” said West. “On stage, they never heard a black guy singing a love song in fluent English because there was a lot of blues around.”

“Mr. B.,” Eckstine’s nickname, was singing bass-baritone in the Pittsburgh style of music. For West, there is no one like the hometown singer who grew up in Pittsburgh’s Highland Park neighborhood.

“It changed my singing style completely. I began singing love ballads,” he said.

In the 1950s Stitt remembered Pittsburgh as a “big money town and the place to be.” The steel mills were booming and kids were singing in the streets.

“That’s when doo-wop was beginning,” he said. It was also the time of Presley, “The King,” and Chuck Berry, “The Prime Minister,” and the birth of rock ‘n’ roll from rhythm and blues.

While working to support his music career, West and a group of musicians known as the “Jimmy West Combo” began to sing on the radio on “The Porky Chedwick Show.”

George Jacob “Porky” Chedwick, an early disc jockey from Homestead, was well-known as “The Daddio of the Radio.” He was the only white disc jockey at the time who played “black music.” His show aired on WHOD-AM. Chedwick is the only Pittsburgher inducted in the DJ exhibit in Cleveland’s Rock and Roll Hall of Fame and Museum.

At the same time, West met Mary Dee Dudley (born Mary Goode), who in 1948 broke racial and gender barriers by becoming the nation’s first African-American female DJ. She launched her show on WHOD as well. She introduced local talent and interviewed national celebrities, including Sarah Vaughan. WHOD became WAMO in the mid-1950s.

At 21, West met Nelson Harrison, a 13-year-old trombone player. He invited him to play with his group at a night club on Route 51 near Clairton. West sang and was the bandleader.

West told Harrison’s mother that he would pay him. He paid him $5, and launched Harrison’s musical career. Harrison never forgot West gave him his first start. He continued to play with the group on weekends while in school.

Harrison completed his education and earned a doctorate from the University of Pittsburgh. Currently, he is an adjunct professor of psychology and ethnic studies at the Community College of Allegheny County (CCAC).

He is also a clinical psychologist, educator, composer and arranger. He played with Count Basie’s orchestra and appeared on an episode on “60 Minutes” with Dan Rather on Basie in New Orleans.

For years he has played with countless famous musicians. He is a founding partner of African-American Innovators Conservatory, a member of the Afro-American Music Institute, founder/owner the Pittsburgh Jazz Network and inventor of the “Trombetto.”

He continues to play whenever West asks him.

“Sometimes we didn’t make any money, but Jimmy always paid me,” he reflected. He recorded 45 records with him. “Whenever Jimmy calls me I’ll go. I’ve played with some of the most famous people in the world, but I’ll go.”

“He’s a very unique person — a funny guy with a great sense of humor,” said Harrison. “He’s very personable. The thing I love about him the most is that he keeps his word and doesn’t lie.”

Following several years of performing and attending record hops with Porky and his group, West traveled to New York City to pursue a music career. Prior to leaving, the 26-year-old worked seven years as a porter at the Eat’n Park Restaurant in East McKeesport.

When arriving in New York, he contacted James Daley. Daley was a record producer and manager of the “Bobbettes,” an R&B girl group. The group had a hit song in 1957 called “Mr. Lee.”

While working as a painter in the Bronx to pay the bills, he began recording with Planet Records, Strength Records, writing songs and performing in clubs in Harlem. He met famous singers who included Billy Eckstine, Ray Charles and Lou Rawls.

Not long after, he had the opportunity to sing in his variety show, “An Evening with James West,” at Carnegie Hall where he met Art Linkletter.

In New York City, he met Marcella Didiere, originally from the Caribbean island of Dominica. They have been married for 44 years and have five children and four grandchildren.

At the time, his mother was living in Pittsburgh and West missed his family. His cousin was famed Pittsburgh photographer “One-shot” Teenie Harris.

A niece, Kimmarie Johnson, a former 1992 Miss Pennsylvania USA and a runner-up in the Miss USA pageant in 1993, is an actress, model and founder of Skin Glow. She credits “Uncle Jimmy” for inspiring her when she thought of herself as a poor, insecure girl without much hope. Once he told her she was very beautiful and added, “You can do it! You can do anything you want to do. Do you know that?” 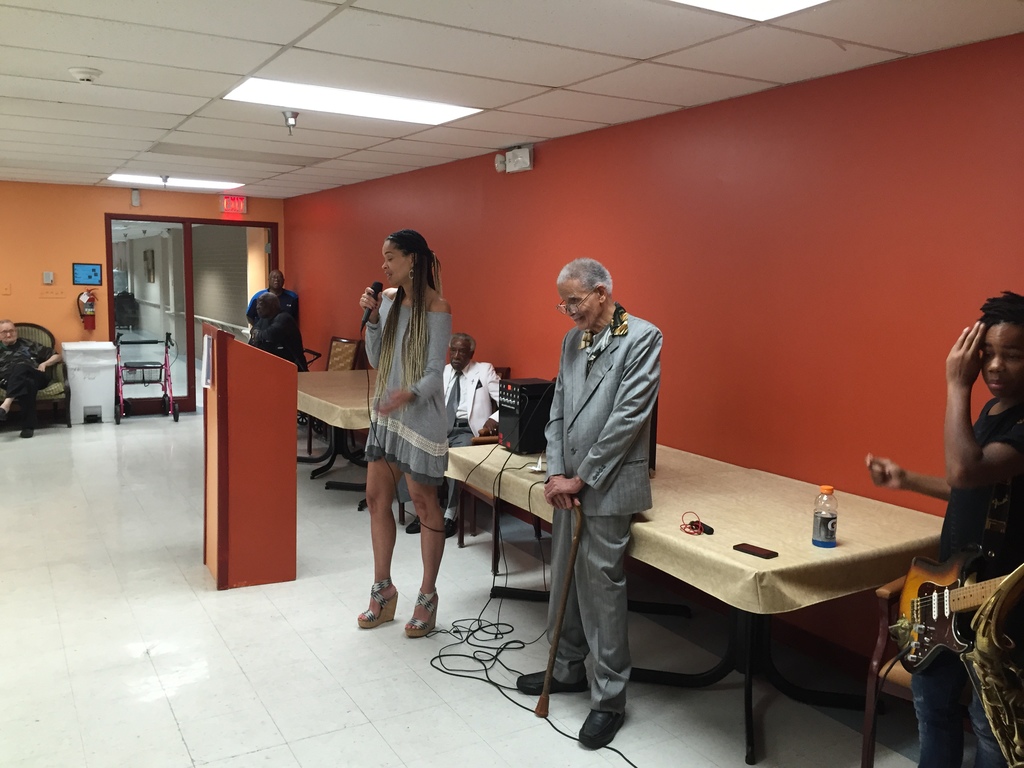 “Later in life, I’ve walked many runways around the world and at times when things got tough I’d recall those words … ‘You can do it, Kim!’ It truly got me through,” Johnson said.

After living for 14 years in New York City, West returned home to Wilkinsburg in 1972.

In a tribute to jazz musicians of Pittsburgh, West organized a concert in 2007 at the Kelly Strayhorne Theater in Pittsburgh’s East Liberty neighborhood.

He rented the hall with $1,000 in his pocket and no performers. He asked Stitt to be master of ceremonies.

“He did it and reached out to me,” said Stitt. “It was the only time I’ve been on stage. He believed that he could do it. Jimmy had the almighty on his side. Everything fell into place.”

The theater was almost filled to capacity.

“If you’re in the music business you love doing something,” smiled West. “I was honoring all the great jazz musicians in Pittsburgh.”