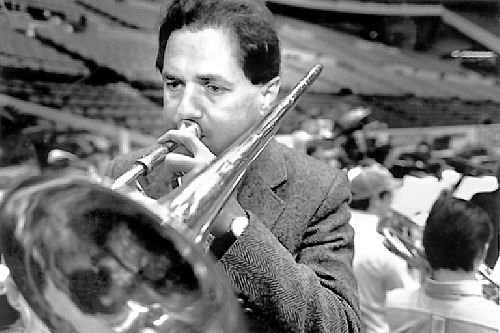 From his Brookline home, where the music never stopped, trombone player Randy Purcell blew his way onto the international scene with his loud and aggressive musical style, becoming ranked among the top dozen trombonists across the globe. Mr. Purcell died Saturday night of complications from diabetes. He was 62. When Mr. Purcell was growing up, the household was filled with music. His father Jack played for the Pittsburgh Symphony Orchestra and then later became somewhat of a local celebrity by playing on the society circuit at parties, weddings and other events. Younger siblings Rick, now a professional musician, and Leslie, a music teacher, played trumpet and piano. Mr. Purcell didn't take up the trombone until the age of 9 or 10, his father said, and it was only to avoid taking piano lessons. He didn't take the instrument seriously until he went to Carrick High School and started practicing more diligently. By 16, he was first trombone in the all-city orchestra and made his first television appearance on his father's weekly music show, "Twixt Twelve and Twenty." He attended Carnegie Mellon University and graduated with a degree in trombone performance in 1968. His first year out of college, he toured for a year with the famed Glenn Miller Orchestra, which played big band and swing music. Later, he toured with several other groups, and during the Vietnam War, he enlisted and became lead trombonist for the Navy Commodore Band, considered one of the best armed services bands in the world. He went on to play with legendary trumpeter Maynard Ferguson, who many consider the pioneer of dizzying high-register trumpet solos. While with Mr. Ferguson, Mr. Purcell arranged and performed a trombone solo on one of the ensemble's most well-known pieces, an orchestral version of "The Way We Were," from the Barbra Streisand feature film of the same title. After touring with the band for four years, he had made his mark on the international scene, playing in Japan and across the country. Down Beat Magazine, a jazz publication, ranked him among the top dozen trombone players in the world. But rather than taking up offers to play in pit orchestras in Las Vegas or New York City, Mr. Purcell decided to return home to Pittsburgh, where he settled in his wife, Marlane, whom he married shortly after graduating college and son, Shawn. He and his wife divorced in the early 1980s. In 1980, he was selected to head up Carnegie Mellon's jazz department, while taking gigs around town. Colleagues and family members spoke of his loud, aggressive style and his ability to lead a horn section. He was competitive and wanted to be the best, and he liked to stand out, his son Shawn said. "He could have a real kind of power," he said. "He could bury a whole band volume-wise." And he had a special rapport with the crowds he played to, speaking to them like a group of friends after leaving them breathless with an ear-bending solo. "What distinguished him most was his personality on his instrument. His personality really came through and spoke to people," said former student Kevin McManus, who played with him for his final performance last July in South Park. But he could be ornery at times, "pushing the envelope" with his sense of humor. Once, his son Shawn recalled, he was playing a more serious jazz gig when a patron requested an old Glen Miller song. He told the patron that Glen Miller should have lived and his music should have died, then proceeded to tell each musician in the band to play in a different key. The terrible noise the arrangement produced left the musicians laughing but the patrons befuddled. In 1985, he decided to become a stockbroker, working part-time at a local firm, because there weren't enough gigs to keep his appetite for constant work satisfied. Between his university job, his work with a local stock brokerage firm and nighttime gigs, he would work up to 18 hours a day. His odd arrangement of professions spoke to his broader ability to be around people of all kinds, from the boardroom to the bar. "He was unique in the fact that he could sort of be around [stock brokers] but could also go to a bar and fit in with someone that was just sort of a barfly," his son said. Mr. McManus said that Mr. Purcell gave him as much instruction in the workings of the music business as he did in technique, helping guide his own professional music career. Though Mr. Purcell's health had been deteriorating since the onset of diabetes in his adulthood, it was catalyzed when exhaustion forced him to quit mostly a few years ago. "Music was such a part of his life," he said. "When he stopped being able to play, he started to go faster." Visitation will be from 2 to 4 and 6 to 8 p.m. Friday in Heard Funeral Home, 4047 Perrysville Ave. A memorial service will be held at 3 p.m. Saturday at Southminster Presbyterian Church, 799 Washington Road, Mt. Lebanon. To make a donation to a college scholarship in Mr. Purcell's name, make checks out to the Randy Purcell Trombone Scholarship and send c/o Duquesne University, 401 Administrative Building, Pittsburgh, PA 15287. Moriah Balingit can be reached at mbalingit@post-gazette.com or 412-263-2533. First published on May 19, 2009 at 12:00 am Read more: http://www.post-gazette.com/pg/09139/971137-122.stm#ixzz0G3gWcdGC&B Randy Purcell's viewing hours and location are as follows: Friday May 22, 2009 2pm - 4pm and 6pm - 8pm Heard Funeral Home 4047 Perrysville Avenue Pittsburgh, PA 15214 (412) 931-0200 www.heardfuneralhome.com

Comment by Angelo on December 15, 2009 at 10:07pm
yeah is a terrible lost i really present my deepest condoles also let me tell u that Online Pharmacy is the best for pills.