I have been going at it hard, friends! I have seen some truly amazing things, met some incredible musicians, crossed some phenomenal bridges, big small, old, new.... sung with some delightful people and made some wonderful new friends and fans! It  has been a very difficult and emotionally wrought journey, but I wouldn't trade a single moment of it for anything in the world.....
We left Pittsburgh, PA amid much consternation, did we have everything we needed??? Or had I brought too much? Would people even like my voice? Would i be too pushy, and seen as some loud mouth American (which I kind of actually am???) Would I know enough words in their languages to not look like a jagoff? How do you use a bidet? What do you mean flipping someone off in Germany is illegal and punishable by up to 1000 euro fine? Would I be able to carry my heavy luggage onto boats and trains and busses and over the bridges I so wanted to see and sing on? Would we lose all the camera gear in an absinthe inspired jazz brawl under a 1000 year old bridge in Prague? All of that (except I didn't flip anyone off in Germany, cuz it's not the kind of thing I do anyways and did I mention that if you do it really is illegal??? And also we didn't fight anyone under Charles Bridge, though some drunk crusty spangers were giving us the "hey you look like you might be carrying $2000 worth of camera gear stink eye", but I "hey man, you aren't the only crazy person here" look and stunk eyed them right back and they left us alone....)
So i cannot recount the whole story right here and right now, it would be too much, and anyways its still being told and thats why were filming everything and making this whole "Takei It To the Bridge"  documentary. Editing will happen after we have created all the content, backed up the data and footage twice, watched it all and compiled it in a way that makes sense, so by winter is our eventual deadline.... but  I did want to touch base, let you know what is happening and where I am at right now.... which as of this writing is in a little air b n b in an artists loft in Fredrichshain, Berlin, Germany. I have some pictures, I have a little video, I have a show to promote (it's tomorrow, we confirmed it yesterday, so if you know anyone in Berlin, make sure to invite them for me!)
Some pics and stories:
1st we flew to Venice, Italy.... if you want to know how strong you are and if your luggage is any good, go there first. I amm weak. And my braind new luggage was held together by tape when we arrived if that is any hint to my mental state when I arrived..... we bought the vaporetto passes (public transport via water on boats) and made our way to the first hotel, several really gorgeous bridges (there were thousands to choose from) and one phenomenal jazz club (simply called "Venice Jazz Club") in this ancient and sacred city of art, culture and passion.....The musicians there were incredible..... I cannot wait for you to hear the footage we got of them! 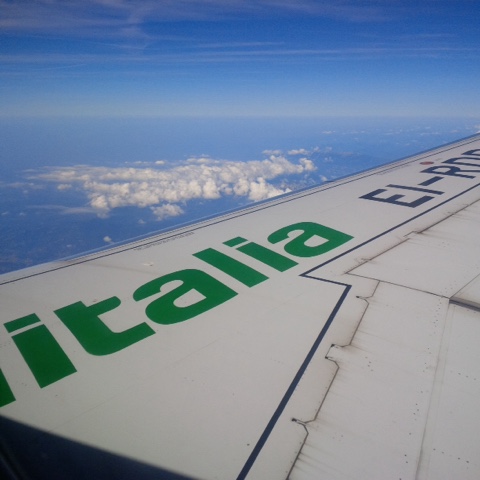 After Venice we went to the World Body Painting Festival in Portshach am Worthersee in Austria so i could sing for Madelyn and Scott of Living Art America's wedding!! Madelyyn painted me for my set at the Green Stage on the Friday afternoon! 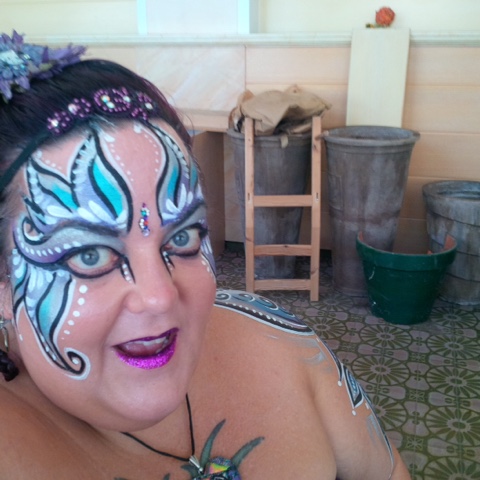 Then I sang for her wedding on Sunday!!! Which was featured in this month's Makeup Magazine! 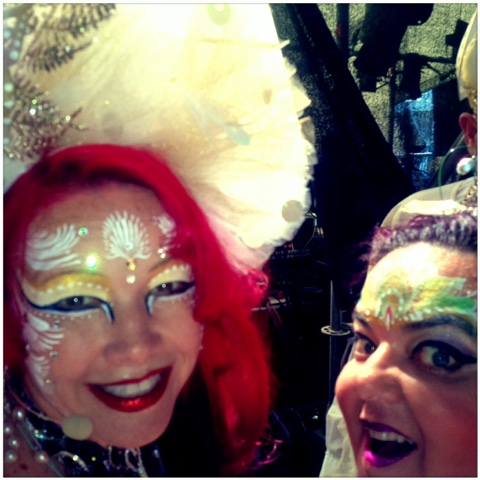 here is a beautiful shot of the entire body painted wedding party!!! 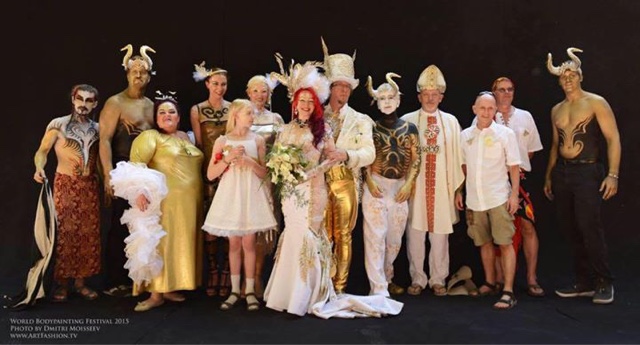 Btw, the guy on the right in the horns, he is 18 years old and just enrolled in the Conservatory of Music in Vienna and he's a bad ass wind player, he totally sat in with me and he killed it, cannot wait for you to see THAT footage!
After this mind blowing and phenomenally incredible experience....we moved on to Munich.... where I found my old friend Jodi Mates Phlegar, who I have known since the age of 3 when we played in kindergarden together at Agudah Achim Synagogue day care in Altoona, PA.....she booked me at the club where her comedy improv group plays with a wonderful singer named Tracey Adele Cooper! Small world.... Tracey is dear friends with the man who sold me my cello when I was 12 years old.... after my Bas Mitzvah in Altoona..... even weirder, a lady named Shirley came to the show, she was born in Germany but raised in Altoona and we were children in Altoona but Jodi was living in Munich.... so weird.... it was an amazing night of music with Tracey's musicians and the next day we went off to play on a small bridge leading to the Nymphanburg Palace..... 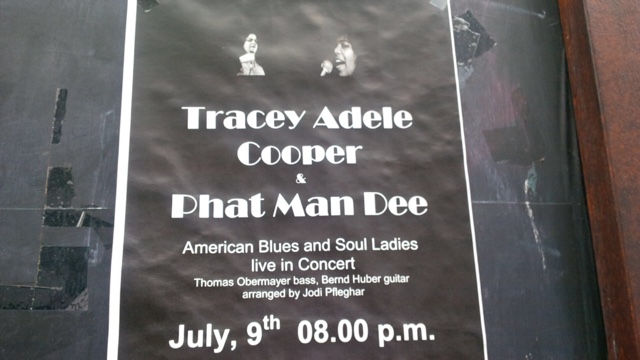 here we are the "Sirens of Munich" as we sang "Wade in the Water" at the bridge at the palace! With the beautiful song stylist and operatic jazz vocalist Tracey Adele Cooper on my right and Jodi Mates Phlegar on my left and the Nymphanburg Palace at our backs! 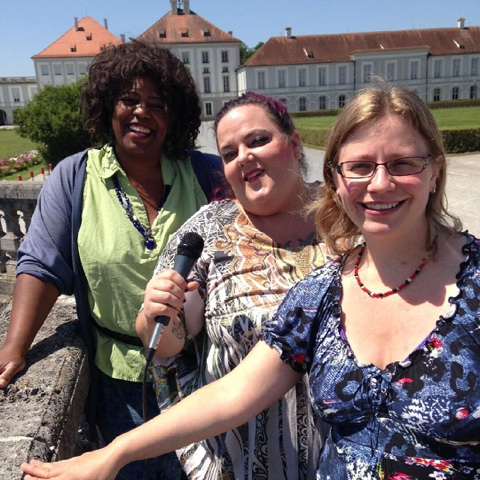 After Munich we headed for Prague.... beautiful, old, stunning and intense Prague.... so many musicians.... I found these gentlemen, the "Prague Cello Quartet" playing on the Charles Bridge which was built in the 1300's, before Spain started colonizing the Americas.... I sat in with them just yesterday..... we  had very few songs in common, because they are not jazz musicians, but we knew a couple in common, so I sang "Love Me Tender" with them..... 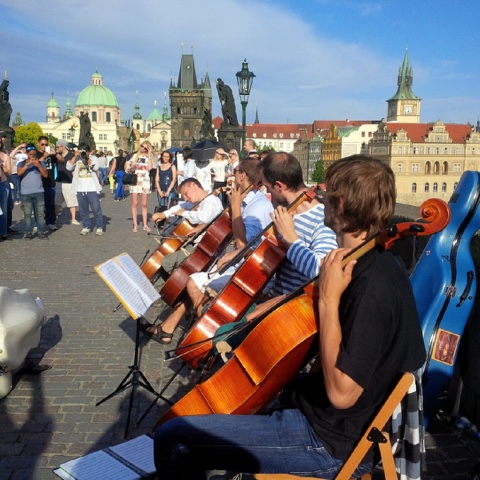 And then later that night I checked out a killer jam session at an underground jazz club, built into what looked like a bona fide cave called "U Mahelo Glena". I sang 4 tunes with them, but the band leader didn't seem to understand that when I said "May I video tape this show" that I wanted to show it to people....my Czech is truly terrible.... so hopefully after we edit it and send it to him, maybe he will change his mind, but for now, I am not allowed to play it on youtube or anything.... thankfully the musicians in Munich and Venice didn't feel that way, nor did the cellists on the bridge! But the club was pretty epic and this morning I ran into 5 French tourists at the train station who loved my singing and told me where in Paris to go to find the best jam sessions!!! So all is not lost!
Here is Alistair aka Smokin' McQueen getting B roll at 7 am on the Charles Bringe yeysterday morning! 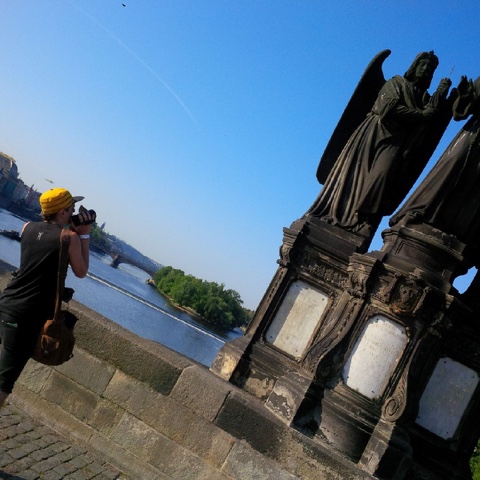 Today I am in Berlin! I have never been here before, and when I arrived it was RAINING! Jossephine Baker once said that it is good luck if it is raining when you go somewhere new.... It means that the city is washing itself for you and you for it.....it was raining when  she arrived in Paris the first time you see....Well it was pouring fit to burst! Luckily we had waterproofed the camera bag, covered it in plastic and had an umbrella, and found shelter.....ON A BRIDGE EXITING THE S BAHN!!!! (fancy German metro)
So, we have not had alot of time to edit and put movie clips up, we are madly creating the music and opprtunities to film, but I promise we will get something up as soon as we can!!!!
And tonight, at Chelsea Bar. A dear friend of mine, who just happens to be world's tallest professional blue bunny, Scotty Blue Bunny, has kindly offered to present me to Berlin at this very special show..... he is beautiful and I am so excited to see him, I haven't known him quite as long as Jodi, but I've known him since I was in the circus sideshow back in the 90s.... he's beautiful.... 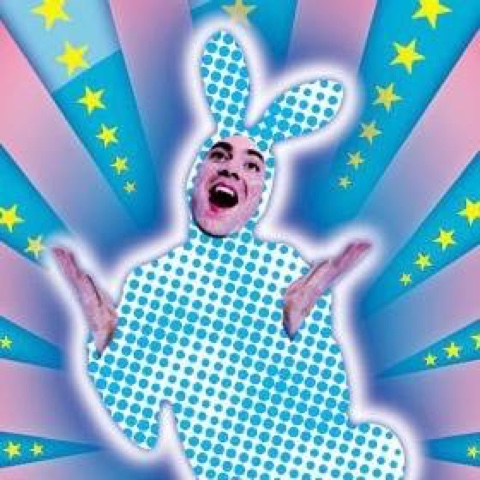 here's the facebook link to that show, please help me spread the word, if you have anyone in Berlin.....
https://www.facebook.com/events/710134619109205/
So that's it for now..... I been busy..... If you want to get more stream of consciousness on the go stuff definitely find me on instagram, twitter or my FB page..... LOVE YOU!!!!!!
I am @phatmandee on both the twitter and the instagram and I am Phat Man Dee on the book of face.....
Love, light and creativity for all, let us now say together "Take It To the Bridge"
xoxo
Mandeee