Stand up, be counted with all the rest! Cuz everybody nkows about Mississippi Goddam!

And here in Pittsburgh, and Ferguson, and Staten island and all over the world....
(If you are not familiar with the song referenced in my subject liner, please refer to the great Nina Simone's song "Mississippi Goddam": http://youtu.be/hBiAtwQZnHs )

Friends, as an artist and musician I long have enjoyed the blessings of working with thoughtful, beautiful, inspired and learned people, many of whom have been people of color, Black, African American, Latino and more.... and I find that while I have always "believed in a just society" and I have fought interpersonal racism in my life, it is, for me, way past time to stand up and say something more loudly. I feel that if I am not part of the solution, then I am part of the problem. Jonny Gammage, Mike Ellerbee, Jordan Miles, Leon Ford, Tamir Rice, Mike Brown, Eric Garner..... the list of names of people taken by systematic racism and an un just "justice" system could go on and fill scrolls which would cover the earth a hundred times.... It is time to "End White Silence" and insist that "Black Lives Matter". it doesn't bother me to say that, because I never felt like my life didn't matter and if my friends and community has people who were not raised to think that by an unjust society, than I am honored to tell them that society was wrong, cuz they really do, matter. So, I am working with a wonderful group of extremely diverse and international and local activists of multiple generations to be part of several events this weekend and I hope you will join us for all of them..... 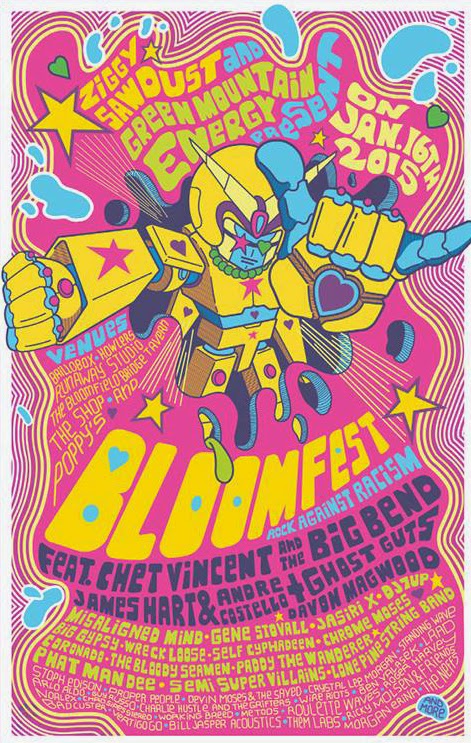 https://www.facebook.com/events/629444013832903/
The Pittsburgh Music Community comes together in a night of music and merriment for a cause, to help raise some awareness and funds for activists working on racism and anti brutality issues.. this is an offering of community in peace and solidarity which many in the Pittsburgh music community find to be unacceptable....
For $10 you can get a wristband which will allow you into 6 venues featuring over 50 bands, for a complete line up see the FB event page.....
I am personally singing at Howlers at 8 pm with my friends Miguel "Cha" Sague III and Carlos Peña, but whomever you see, know we are all donating our time and artistry to support the good work of "We Change Pittsburgh" and the work that they are doing to fight racism through protest and actions in solidarity with Ferguson and beyond.

I am part of the coalition of activists organizing this march and rally, and I will be singing at the downtown rally after the march.....
At 6 pm we will gather at the intersection of Forbes and Bigelow Ave, in the Oakland neighborhood of Pittsburgh, have a short rally and then march downtown to City-County Building, on Grant St.

As Dr King said: "Our only hope today lies in our ability to recapture the revolutionary spirit and go out into a sometimes hostile world declaring eternal hostility to poverty, racism, and militarism."
So, on his birthday, we shall march and rally against police brutality and racism to keep his legacy alive.
We demand an end to all forms of racist wars: from the domestic war waged against the poor and working Black and Latino communities to the imperialist wars on the poor and working people all over the world.
This is part of a national call to action - the #4MileMarch happening all over the country to bring awareness to America's epidemic of racial profiling and police brutality, and to honor all those who have been injured or died as a result of police violence.

Later that same evening I will be singing for the annual Dr King Birthday concert to benefit the Duncan and Porter Homeless shelter run by long time peace and justice activist Vincent Eirene.
For more information on that event:
https://www.facebook.com/events/787513721327432/

Future appearances of mine include the Sweetwater Arts Center "Sweet Jazz Series" where I shall sing on February 27, 2015, 7-9 pm, with my full band with Donna Davis, Mike Houlis, and John "Smitty" Smith.
Tickets are $15 and info about Sweetwater can be found online at:
http://www.sweetwaterartcenter.org/

Other helpful links if you want to get involved locally with the pursuit of social justice:
http://wechangepittsburgh.com/
http://thomasmertoncenter.org/
http://wwhatsup.wordpress.com/

As a final note.... please hear the music of a man who made Pittsburgh sound like one of the prettiest places in the world....Rest with God Gerald "Shotgun" Haymon..... your groove will never be forgotten.

When I wrote my original post, I did not know Maureen Budway was leaving us too.... We know Heaven's Choir is gonna sound amazing... but right now all I hear is crying.... Pittsburgh won't soon forget the likes of smart, funny, lovely and beautiful Mo and the powerfully righteous groove of Shotgun....

Here's a heart breaking and simultaneously uplifting song as performed by the late Maureen Budway..... Rest with God Shotgun, Rest with God Mo.... we were blessed to know you while you were here....

Love who you're making music with friends.... tomorrow is not promised to us. But right now, we have today.