Steve Coleman - The Acquisition of Language in the Jazz Tradition

After 30 Albums and 3 Recent Prizes, a Jazzman Flirts With the Mainstream 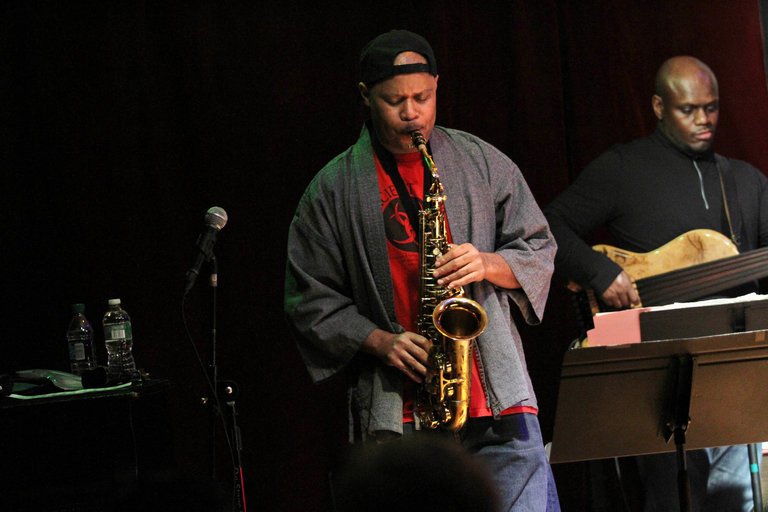 
Steve Coleman is the most important jazz musician that many fans have never heard of. He’s been the leader on 30 albums in the last three decades and the mentor to a dozen younger artists now making headlines, yet he’s remained an underground figure, content to burrow his own pathways. Lately, though, his profile’s been rising. In the last two years, he’s won a trifecta of arts prizes: a Guggenheim fellowship, a Doris Duke performing artist award and a MacArthur genius grant.

On Tuesday, to celebrate his 60th birthday, he begins a monthlong residency at the Stone, in Manhattan’s East Village, playing almost every night with his longstanding quintet, Five Elements. It’s a throwback to a much earlier era, when the likes of John Coltrane or Thelonious Monk took over the stage at clubs like the Five Spot or the Half Note for a month or more to work out their next new things.

Mr. Coleman grew up on Chicago’s South Side, listening to a mix of funk, soul and his father’s Charlie Parker albums, and started playing the alto saxophone at age 14. His epiphany came one day, four years later, while practicing his horn in Jackson Park, a block from where he lived.

“I had a big Afro, I wore this Afro sheen that had a sweet smell, and bees were flying around my head,” he recalled. “After a while, I grew fascinated by the bees’ zigzagging flight path. I began to wonder what it would be like to play music the way bees fly.”

He started paying attention to all kinds of motion in nature — the way gnats flutter around a light bulb without bumping into one another, how clouds change forms as they drift across the sky, how water drips from a leaf — and translating these complex patterns into music: their rhythm, harmony, melody, form and texture. “It’s not intuitive,” he said. “You have to study how these things work. It’s like Einstein asking what he’d see if he rode on a beam of light.”

In 1978, at 22, he moved to New York, quickly got sideman gigs with some of the city’s most innovative musicians (Cecil Taylor, Sam Rivers, Dave Holland and David Murray), then fell in with a collective of young musicians creating new combinations of improvisation and structure. Some of its members — the pianist Geri Allen, the singer Cassandra Wilson, the saxophonist Greg Osby — became stars, at least in jazz terms. Mr. Coleman remained an outlier. The guitarist Lonnie Plaxico, his roommate for a while, told him that his music was too weird to catch on. Ms. Wilson complained that a vocal part he’d written for her was “unsingable.”

In 1991, he moved to Allentown, Pa., where he still lives, mainly to save money, but also to gain some quiet away from the frantic scene. He started studying the ancient cultures of Egypt, Mesopotamia, Greece, India and China — including fragments of musical scores — to see how their people viewed the laws of nature and interpreted them as music.

With the help of foundation grants, he started traveling abroad — Ghana, then Cuba, Senegal, India, Indonesia and beyond — to track down local musicians who were carrying on centuries-old traditions. (“Some of these guys were under rocks, you had to dig to find them,” he said.) Often, he’d rent a house for several weeks, bring these musicians together with his band members, who’d traveled with him, and spend hours each day hanging out, exchanging ideas and playing music — theirs, his and spontaneous fusions of both.

Each time he came back home, or went on tour, he’d explore these new ideas. “I wasn’t copying anything from those cultures,” he stressed. “I wasn’t trying to play Cuban music or Indian music. I was looking for examples of how other humans do this, how they communicate through sound, and what I can use of this for my music.”

His most recent albums — “The Mancy of Sound,” “Functional Arrythmia” and “Synovial Joints,” the latter two inspired by the drummer Milford Graves’s studies of rhythm’s biological roots — find him and his band mates fluent in the language they’ve invented. If his records of a decade ago are like the fitful prose of a skilled linguist grappling with an esoteric syntax, these latest works have the grace and drama of a master poet or playwright at his peak. (Nate Chinen, writing in The New York Times, hailed “Synovial Joints” as the best album of 2015.)

“When I first heard Charlie Parker records,” Mr. Coleman recalled, “I got the impression that he was speaking. His phrases were very conversational. My band and I talk a lot about ‘sentences,’ ‘paragraphs.’ We have a dialogue going back and forth, the way the music flows, the same way you talk in a language.”

When he and his quintet played at the Village Vanguard in May (only the second time they’d played at the storied New York jazz club, another sign of his growing mainstream acceptance), this conversational aspect was what stood out: the seamless interplay, the shifts in key or tempo or mood with the subtlest of cues, the way that he and the trumpeter Jonathan Finlayson — or that the players in the rhythm section (the guitarist Miles Okazaki, the bassist Anthony Tidd and the drummer Sean Rickman) — traversed lines that seemed entirely independent yet, somehow, perfectly in sync.

The foreign influences pop out here and there (they probably account for the exotic shifting rhythms and colliding harmonies), but what binds the music and makes it more than an intellectual exercise is its rootedness in jazz idioms — and Mr. Coleman’s tone on alto sax, reminiscent of Parker’s piercing sweetness but swept across a broader canvas than anyone in the bebop era, even its master, could have imagined.

“My biggest influence,” Mr. Coleman said, is “the fact that I grew up in an all-black neighborhood in Chicago.” In the days of rail travel, Chicago was the stopover point for musicians from all over, a position that made the city a hothouse of experimentation. As a teenager, Mr. Coleman sought out, and sometimes sat in with, the city’s top jazz musicians — the master improviser Von Freeman, the avant-garde composer Henry Threadgill (who this year won the Pulitzer Prize for music), and the Association for the Advancement of Creative Musicians, a jazz collective that explored fusions of the ancient and the new, a concept that would inspire his own later ventures.

In other words, over the decades, he’s funneled his myriad explorations through all the music he’s grown up with. The veteran jazz drummer Billy Hart, who hired him as a sideman in the 1980s, put it this way: “Steve Coleman is the first in his generation to pull together all these influences — all the music up to this point. His own influence lies in the way he pulled it together, from a deep knowledge of tradition and through an original sound.”


Steve Coleman and the Five Elements will be in residence through Sept. 25 at the Stone, Avenue C and Second Street, thestonenyc.com.

A version of this article appears in print on August 29, 2016, on page C2 of the New York edition with the headline: After 30 Albums, a Jazzman Flirts With the Mainstream. Order Reprints| Today's Paper|Subscribe