If you say you are an artist, but you make little money from selling your art, can your work be considered a profession in the eyes of the Internal Revenue Service?

In a ruling handed down late last week by the United States Tax Court and seen by many as an important victory for artists, the answer is yes. The case involved the New York painter and printmaker Susan Crile, whose politically charged work is in the collections of the Metropolitan Museum of Art, the Guggenheim Museum and several other major institutions. In 2010, the I.R.S. accused Ms. Crile of underpaying her taxes, basing the case on the contention that her work as an artist over several decades was, for tax-deduction purposes, not a profession but something she did as part of her job as a professor of studio art at Hunter College.

The heart of the case touches on a situation familiar to many thousands of artists — from visual artists to musicians and actors — who earn a living as teachers or studio assistants or stagehands while pursuing creative careers that they hope will flourish and someday be able to pay the bills. 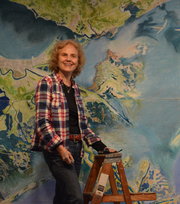 Susan Crile, a painter and printmaker who teaches at Hunter College, was accused by the I.R.S. of underpaying her taxes. CreditConstance Kheel


During a trial before the tax court last year, Ms. Crile, whose work has focused on subjects like the Persian Gulf war of 1991 and the abuses at Abu Ghraib prison, described a dogged career of more than 40 years that has been more successful critically than financially. From 1971 through 2013, court papers said, she earned $667,902 from the sale of 356 works of art — or an average income of a little less than $16,000 per year — and, like many artists, she wrote off expenses from her work, like supplies, travel and meals, on her taxes. Only three years of her art career have been profitable, court records showed, and her reliable income came from teaching at Hunter, where she began part time in 1983 and became a tenured professor in 1994.

The I.R.S., which accused Ms. Crile of underpaying her taxes by more than $81,000 from 2004 to 2009, argued that based on several factors, such as her lack of a written business plan, her work as an artist was “an activity not engaged in for profit” and that she could not claim tax deductions in excess of the income she made from her art. Further, in a claim that alarmed many in the art world, the I.R.S. contended that Ms. Crile’s legal position that she was both an artist and a teacher was “artificial” and that she made art primarily to keep her job as a teacher. (Hunter College requires its studio-art teachers to exhibit their work but does not require them to sell.) The agency argued that for tax purposes, Ms. Crile’s profession should be that of a teacher, and that her art-related expenses should have been filed not as business expenses but as unreimbursed employee expenses.

But Judge Albert G. Lauber of the tax court ruled Thursday that Ms. Crile had “met her burden of proving that in carrying on her activity as an artist, she had an actual and honest objective of making a profit” and therefore under tax law should be considered a professional artist.

Robert Storr, dean of the Yale School of Art, who testified on Ms. Crile’s behalf, said Monday that the ability to deduct art-related expenses — in art careers that might generate little money — was “one of the last remaining areas where the federal government cuts artists any slack to allow them to do what they do,” and that its protection was crucial.

Micaela McMurrough, a lawyer at Cravath, Swaine & Moore who defended Ms. Crile, said one of the key points argued in the case was that “art is not a business like other businesses.” “And I think that’s what this decision reflects, to a large extent,” she said.

Michael J. De Matos, a lawyer for the Internal Revenue Service, referred questions about the decision to the agency’s press office, which did not immediately return calls for comment.

Ms. Crile said she was relieved by the decision, for herself but also for many other creative professionals it might affect. “I think this was an attempt to get rid of a whole category of people from being able to take tax deductions,” she said. “I’ve done a lot of political work that is not so easy, and it’s not easy to show or to sell. But I’m an artist. And if I’m not considered one, then I don’t know who could be.”


A version of this article appears in print on October 7, 2014, on page C3 of the New York edition with the headline: Tax Court Ruling Is Seen as a Victory for Artists. Order Reprints|Today's Paper|Subscribe