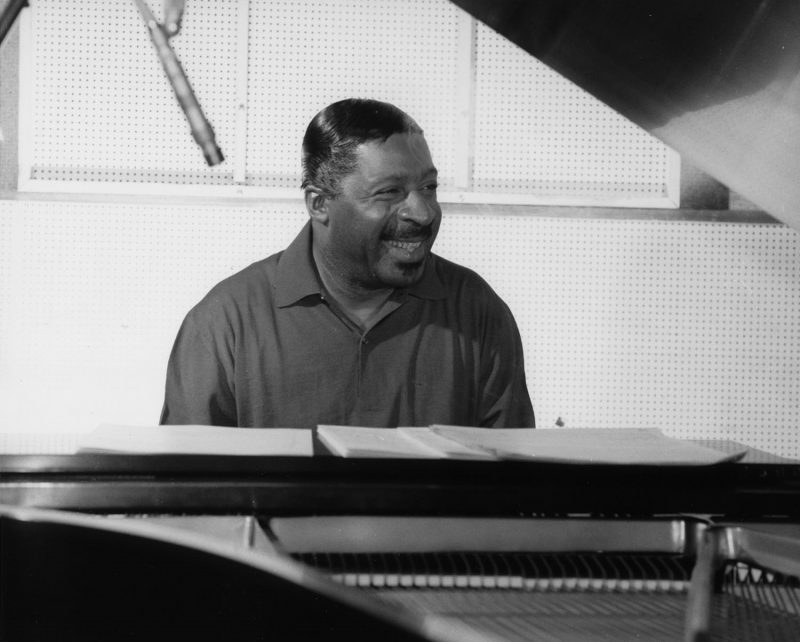 Thanks to COVID, Kelley’s Octave Remastered Series podcast project—undertaken at Rosenberg’s and Lockhart’s suggestion—is incomplete as of this writing. But one of his guests, guitarist Miles Okazaki, writes in the notes to his summer 2020 album Trickster’s Dream that they discussed how Garner’s “marvelous and joyful inventions … meshed perfectly with the idea of the role of the Trickster as the one who exists on the border, opening doorways in consciousness of what is possible, to say ‘it doesn’t have to be this way.’”

It’s interesting to consider the Trickster archetype when speculating why Geri Allen, who’d previously done deep dives into the legacies of such heroes as Mary Lou Williams, Cecil Taylor, Herbie Hancock, and McCoy Tyner, decided to celebrate Garner with a concert at the 2015 Monterey Jazz Festival where she, Jason Moran, and Christian Sands reimagined Concert by the Sea. After a few more Garner performances with Sands, Allen asked Rosenberg and Lockhart to retain his services “to take over the youth market,” Sands says. When Allen died of pancreatic cancer in 2017, Sands became the EGJP’s creative ambassador.

Among Sands’ duties, he reports, are giving private master classes and larger lectures, participating in the remastering process for the various reissues, and performing rearranged Garner pieces in a speculative manner with his Highwire Trio. “For me, it’s a fresh look at what Erroll might play if he were exposed to all the music that’s going on today, because he was such a master at using all the sounds around him yet keeping his own style,” Sands says. “You take the information that Garner supplied, whether it’s the locked hands, or the octaves, playing with dissonance, the push-and-pull of the time, or just his left hand coordinating with his right hand. We can use so many of these tools to express ourselves.”

For Sands, the introductions are portals into Garner’s soul. “They contain his absolute raw talent and ideas,” he says. “His arrangements of standards that used the form of the songs were unbelievable, but before that he has complete rein to do whatever he wants. Sometimes the introductions take elements of the song that he likes, but it’s often as though it were its own free, composed piece.”

As an example, Sands references Garner’s 20-second preface to “Gemini,” a brisk, rolling gospel-blues that titles his tenth Octave album, recorded in 1971. “He previews a bit of the melody, plays around with it, molding it at will—because he can do anything. He’ll play it in the right hand. He’ll play it in the left hand. He’ll double it with octaves, then he’ll change the whole idea and come down towards the left side of the piano. He’s deconstructing his own playing, showing us the melody, the groove, the blues sound. Chances are he won’t play it the same way again. It’s honest and true, and you hear his beautiful spirit, how warm a person he must have been.”

A YouTube clip of the 2015 Monterey concert documents Moran’s application of Garner’s raw materials to his personal argot on “Night and Day.” Inspiring his approach was Garner’s introduction to “Mack the Knife” on One World Concert, which Moran discussed with Kelley in the podcast. He recalled that Byard, Moran’s college mentor, introduced him to Garner, but he had his “conversion experience” later, when he heard Garner’s 1950 recording of “Poor Butterfly.”

“I fell out of my chair,” Moran said. “I listened to this song incessantly because of the way Erroll drags the beat, which I felt J Dilla was starting to do in his production at the time. Erroll’s left hand is pumping it, sometimes anticipating the beat, and his right hand is dipping behind it—but he’s doing that in both hands. It’s buoyant but it also sinks. I remember trying to transcribe parts of that intro, because I thought, ‘I need to know what it is—I have to make my own composition based off of that.’”

Vijay Iyer also found inspiration in Garner’s rhythmic legerdemain, honing in on “the thickness and intensity” of his sound, “the way he radiates groove, holding it very grounded in his left hand while his right hand tends to dance across and against that with a graceful, fulsome expression.” As an example, he mentions Garner’s “radically Other” interpretation of “I Got Rhythm” on Plays Gershwin and Kern.

“His version loses all its Tin Pan Alley quality, and becomes like a deep blues march,” Iyer says. “He sets it up with an extravagantly irregular, wildly contrapuntal introduction, but you realize that he’s heading straight for a target, laying it down in a way that the rhythm section catches because of the quality of the pulse and groove. In moments like that, I hear a connection to a particular axis of Black American piano playing that’s ‘deep in the keys,’ as they say, where the articulation of sound has this animated and sharp angular quality. In some ways it doesn’t matter what the songs are. It’s not so different from Ahmad Jamal or Tatum—he could make any song into what he wanted it to be.

“It always feels like you’re getting a glimpse of a way of being, a way of living,” he continues. “Garner had that special force. It’s often written that his music expresses pure joy or happiness. I think some of that is about the white gaze, what white journalists and critics wanted to see Black people doing—happy, hard-working Black people, not complaining. Basically, that’s at the heart of white supremacy. On the other hand, you get the sense that he led his own path. That’s a different kind of ‘black joy’ that I’m interested in studying.”

The novelistic spectrum of emotions that Garner could evoke was a palpable thing for Kelly Martin, who played drums in Garner’s trio alongside bassist Eddie Calhoun from 1956 to 1966. “Erroll loved people and he loved to play for them,” he told Balliett. “His way of playing and creating was all in his face, and his way of talking was in the piano. If he was down or upset, we could hear it. He didn’t like to rush into what he was going to play, and those long, crazy introductions gave him time to settle himself. We almost always wore tuxedos. Eddie Calhoun used to say, ‘Man, it’s hard to swing in a tuxedo,’ and I seconded that. Erroll could make anybody swing, though.”

In short, Garner conveyed the human condition to a mass audience. He did so at multi-layered levels of wit and sophistication. He always improvised. As Jennings (insightfully) observed, he treated “each concert or recording session as though it might be his last.” The joy, ebullience, and high romance associated with his persona have captured listeners from multiple backgrounds for 75 years. And once today’s listeners absorb the lessons that the Octave Remastered Series offers, “activist” and “radical” may join those ambiguously subjective descriptors as common parlance in the Garner lexicon.

Ted Panken writes extensively about jazz and creative music for various publications, and programmed jazz and creative music on WKCR-FM in New York City from 1985 through 2008. He won the 2007 ASCAP Deems Taylor Award for his article “Smalls Universe,” published by DownBeat, and earned the Jazz Journalists’ Association 2016 Lifetime Achievement in Jazz Journalism award. His blog, Today Is The Question, contains over 260 of his articles and verbatim interviews.