From Wikipedia, the free encyclopedia

Tommy Hunt (born Charles James Hunt; June 18, 1933 in Pittsburgh, Pennsylvania, United States)[1] is an American soul/northern soul singer, and a 2001 Rock and Roll Hall of Fame Inductee as a member of famed R&B group The Flamingos.

Born to Georgianna Derico, Hunt started his life in Pittsburgh, where his school friends, nicknamed him Tommy, and it has stayed with him throughout his entire life. Music dominated his life and he was sent to reform school after spending his learning hours practicing for and entering talent shows. He was released from reform school when he was 10, and he and his mother moved to Chicago.

After a stint in the United States Air Force, Hunt went AWOL in order to be with his mother, who was dying. He served time in prison for deserting, and after his release, returned to Chicago and formed a group called The Five Echoes.[1] While performing in a club, he was approached by Zeke Carey of The Flamingos, and asked to take Carey's place, as he had recently been drafted. Hunt was kept on after Carey returned.[2]

In 1959 their biggest hit was "I Only Have Eyes For You" which remains their most popular song, being used in film soundtracks and on compilation albums to this date.

Hunt left the group in 1961 due to musical differences,[1] but within three days he was approached by Luther Dixon and released "Parade Of Broken Hearts" which was slow to be picked up by the radio stations. In New York a disc jockey called Jocko Henderson introduced the song but played the B-side by mistake. The track aired was "Human", Hunt's biggest hit in the U.S.[1] His 1962 B-side, "I Just Don't Know What to Do with Myself", written by Bacharach and David and produced by Leiber and Stoller, was the first recording of the song,[1] which later became a major hit for Dusty Springfield, Dionne Warwick and others.

Hunt became a regular performing at The Apollo in New York alongside such artists as Jackie Wilson, Marvin Gaye, Ray Charles, Diana Ross and The Supremes, The Shirelles, Dionne Warwick, Chuck Berry, Bo Diddley and Sam and Dave. To the best of his knowledge, Hunt remains the only person to have his photograph framed twice in the Apollo foyer, both with the Flamingos and as a solo artist. Several years and a couple of minor hits later, Hunt sang for the U.S. Army in Germany. By 1969 he left his homeland, traveled back to Germany, through Belgium and across the English Channel to the United Kingdom. 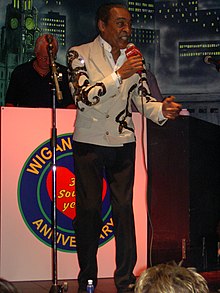 After several performances in the theater clubs throughout the UK, Hunt sang at the second anniversary of the Wigan Casino, and there followed success on the Northern soul scene.[1] Hunt was approached by Russ Winstanly and Mike Walker of the Casino and released several hits on Spark Records.[1] The first was a cover version of a song formerly sung by Roy Hamilton, entitled "Crackin' Up".[1] It peaked at No. 39 in the UK Singles Chart in October 1975.[3] This was followed by another chart success "Loving On The Losing Side" (UK No. 28, 1976). 1982/83 saw Hunt win the Male Vocalist of the Year, presented by Club Mirror. His track, "One Fine Morning", reached No. 44 in the UK chart in December 1976.[3]

With the decline of the Northern soul, Hunt's shows dwindled and he hit the cabaret circuit further afield, moving to Amsterdam in 1986, and traveling the world. In 1996, the first of his recognitions came in the form of The Rhythm and Blues Foundation Lifetime Achievement Award for the Flamingos contribution to music. In 1997, Hunt relocated to the UK and embarked on a revived Northern soul scene.

In later years, having turned his hand to songwriting, Hunt penned his autobiography, Only Human, My Soulful Life, with author, Jan Warburton, which was released in December 2008.

Hunt started a new live show as Tommy Hunt & The New Flamingos, with members of the Spanish vocal group Velvet Candles. This show was presented on June 3, 2011, during the Screamin' Summer Festival in (Barcelona, Spain.

The Five Echoes with the Fats Coles Band