A New Architecture for Jazz

The Ahmad Jamal Trio's 1958 album "But Not For Me" may have confounded critics, but it changed the direction of the jazz-piano trio, influencing such great names as Peterson, Evans and Davis. The recording remains one of jazz's most elegant recordings.

Fifty-five years ago this week, an album by a jazz trio entered Billboard's best-sellers chart and within weeks jumped over Elvis Presley's "King Creole" and Mitch Miller's "Sing Along With Mitch" to occupy the No. 3 slot. The album—the Ahmad Jamal Trio's "But Not For Me," recorded live at Chicago's Pershing Lounge—would appear on the chart for 107 weeks, confounding jazz critics and influencing the direction of the jazz-piano trio. Today, it remains one of jazz's most elegant recordings.

Recorded on Jan. 16, 1958, and released that spring, "But Not for Me" deeply affected how jazz pianists voiced standards and interacted musically with their bass players and drummers. By August, the album had sold nearly 48,000 copies—a staggering accomplishment since any album's sale of just 20,000 copies in its first few months back then was considered significant. Equally impressive was that the album was on Argo—a niche label based in Chicago. By contrast, one of jazz's most successful albums—the Dave Brubeck Quartet's "Time Out"—wouldn't be released until the following year and was greatly helped by Columbia's powerful mail-order record club and marketing machine. By the end of 1958, "But Not for Me" was the top-selling jazz album in stores. 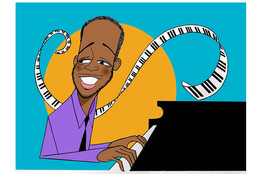 The rapid rise of Mr. Jamal's album and its staying power owed much to the trio's relaxed sound, its long-term stay at the Pershing and a media gambit by Argo executives. When early word of the album's strong sales trickled out, the label invited Billboard to review its books. Billboard took a look and published a buzz-building trade article in August 1958 that caught the eye of radio and retailers and led to the release of singles from the album—including "Poinciana," which became the trio's signature song.

Mr. Jamal's distinctive style—melodies played on the piano's upper-most notes combined with elegant and brief midkeyboard chord clusters—had been revered by jazz musicians since his first recordings in 1951. Miles Davis so admired Mr. Jamal's lyrical, space-rich approach on "Surrey With the Fringe on Top," "A Gal in Calico," "Billy Boy" and other early recordings by the pianist that he recorded them virtually the same way. The trio's conversational approach also left a lasting impression on many pianists, including Oscar Peterson, Red Garland, Bill Evans, Phineas Newborn Jr. and Herbie Hancock.

Yet jazz critics gave "But Not for Me" and Mr. Jamal a rough ride. Martin Williams in Down Beat magazine called the album "cocktail piano" music, while Ralph J. Gleason wrote in the San Francisco Chronicle that Mr. Jamal was "an effete Erroll Garner" who left "too many spaces for the other members to fill." The New Yorker's Whitney Balliett said Mr. Jamal's style gave "the impression achieved by spasmodically stopping and unstopping the ears in a noisy room." Rather than embrace Mr. Jamal's minimalist sophistication, critics simply concluded he had sold out.

Listening to the album today (it can be found on Mosaic's "The Complete Ahmad Jamal Trio Argo Sessions: 1956-62"), it's hard to grasp why so many jazz critics missed the point. The album features Mr. Jamal, bassist Israel Crosby and drummer Vernel Fournier performing eight swinging interpretations of well-known songs. Critics who had gushed about Ella Fitzgerald's Songbook series and many jazz-pop albums produced by Norman Granz were curiously hard on Mr. Jamal.

For their part, many critics by 1958 had come to expect jazz pianists to serve up growling, robust attacks—like the gospel-funk of Horace Silver, the fiery flash of Mr. Peterson and the daring of Thelonious Monk. By contrast, Mr. Jamal was gentle and spirited, playing with songs like a cat on its back having fun with a ball of string. But while the album is a study in subtlety, Mr. Jamal used plenty of percussive surprise and an elastic range.

"The orchestral sense I had developed growing up in Pittsburgh never left me," said the 83-year-old Mr. Jamal in a recent phone interview shortly after releasing "Saturday Morning," his latest CD. "My extensive use of the keyboard's high end just happened. I liked the melodic nature it lent compositions. By lingering there, I also could leave plenty of room for Vernel and Israel."

Mr. Jamal's orchestral approach to his trio arrangements—worked out in advance of performances and recordings—allowed the listener to hear the piano melody way up top, Mr. Fournier's whiskerlike brush strokes in the middle range and the thump of Mr. Crosby's bass down below. Mr. Jamal was keenly aware of how space could pull listeners close while familiar melodies and high notes won hearts.

Fans can thank a glass of wine for the recording. In 1956, Mr. Jamal was playing during intermissions at the Embers in New York when a drunk with a request accidentally spilled his drink all over him. "That was it," Mr. Jamal said. "I got up, Israel and I got our coats, and we drove to Chicago in my Buick station wagon. My guitarist, Ray Crawford, didn't want to come, so he stayed behind."

Once in Chicago, Mr. Jamal went to the Pershing Lounge and proposed playing there as its artist in residence. "I had a name by then and they liked the idea. I hired Vernel to join Israel and me, and we played five sets a night, six nights a week, for over a year. Everyone in the music business dropped by to hear us—and many heard ideas that they used for their own trios and albums."

In late 1957, when Argo's owner, Leonard Chess, began talking about recording the trio, Mr. Jamal insisted they do it live at the Pershing. "The room was about intimacy and drama, and we were comfortable there. We were more than ready after playing together for so long. We recorded 43 songs that night in front of a live audience. I listened back for a week and chose eight tracks for the album. There was no splicing. What you hear is what we played."

But fear of artistic theft had forced Mr. Jamal to take precautions. "Leading up to the recording, we stopped playing 'Poinciana' to keep my arrangement a secret. I thought another pianist might come in, hear it and steal what I was doing. I knew we had something special. I had a gut feeling."

Mr. Jamal was more than right. When "But Not for Me" was released in 1958, it had enormous crossover appeal—creating a new architecture for the jazz trio and how standards were interpreted. Unfortunately, many jazz critics didn't know what to make of it. The album had become too successful.

—Mr. Myers writes daily about music at JazzWax.com and is the author of "Why Jazz Happened" (University of California Press).

A version of this article appeared September 28, 2013, on page C13 in the U.S. edition of The Wall Street Journal, with the headline: A New Architecture for Jazz.