James Brown’s band members react to ‘Get On Up’

AUGUSTA, GA — A week after the release of ‘Get On Up’ that chronicled the James Brown story, key players who could have provided vital fodder to the storyline are now speaking out.

Saxophonist Maceo Parker, a band member who for many years was a cog in the James Brown machinery, 1965-1975, gives the film an eight on a 10-point scale.

“It was a movie. What can you say? It had a Hollywood feel to it; therefore it served its role. I must say it was good.”

Parker said he was especially impressed with Chadwick Boseman as the Godfather of Soul. “He really became James Brown. He did a remarkable job,” said Parker from his North Carolina home.

Though Parker and other band members differed on some parts of the movie, including some of the more overly dramatic scenes, they generally agreed the musicians should have been contacted at some point during the film’s development – mostly as consultants.

“I have no idea why I was not contacted,” said Parker, who often worked as Brown’s bandleader, stage emcee and comedian. Brown often referred to Parker’s first name on recordings, with “Maceo blow your horn,” during solos. “James really made me a household name, especially in Europe,” he said.  In referencing the consulting void, he added, “Maybe they were afraid to pay us some type of consulting fee or something. I have no idea. I just know I was never contacted.

It’s not like I can’t be reached. Hey, you (the reporter) found me – I tour throughout the world. I’m not in hiding,” Parker said, noting that he joined the Brown Band in 1964, along with his brother and drummer Melvin Parker, when the two attended North Carolina A&T University in Greensboro.

Actor Craig Robinson attends the “Get On Up” premiere at The Apollo Theater on July 21, 2014 in New York City.( Jemal Countess/Getty Images North America)

Maceo Parker was especially discontent with his character in the movie played by actor Craig Robinson. “That character cursed a lot. In reality, I never swore – and still don’t,” said the bandleader who currently tours the world as The Maceo Parker Band.

Joe Collier, of Augusta, played trumpet for 21 years in the Brown outfit. Like Maceo Parker, he was thrilled that Hollywood finally chose to depict his former boss’s life in a major motion picture.

“Really, it was quite an undertaking considering the enormous life that Mr. Brown led,” said Collier. “It was difficult to capture the essence of his life – but at least this leaves an historical legacy surrounding his existence – especially for the youth.”

Collier says he was never contacted either.

“Not at all. I wasn’t contacted either,” said Collier, who also serves on the Richmond County Coliseum Authority with a board that meets regularly at the aptly-named James Brown Arena.

Collier hesitated on grading the film, but said, “The movie was good.

The acting was great. I think they nearly captured Mr. Brown’s essence but his legacy would have been fully consumed had they consulted the musicians.

“There are just so many nuances that he did that only his musicians would really know about – even down to his shoes. In the movie, I noticed he wore regular shoes. Band members know he typically wore ankle-high dress-boots.

“Like I said, it was a movie and I’m just glad it was made.”

Augusta vocalist and bandleader Tony Howard spent about 15 years as a personal friend and a contributing artist on various performances and projects.

This July 21, 2014 photo shows actor Chadwick Boseman, star of the James Brown film “Get On Up,” in New York. (Photo by Dan Hallman/Invision/AP)

“Frankly, I’m thrilled about the whole thing. It was a great movie. It gives people a chance to see Mr. Brown as a person. They did a good job in capturing him – and Chadwick Boseman deserves an Oscar for his portrayal.”

“It was his powerful music that helped make this movie. People were dancing and nodding in their seats. You couldn’t help it. I’d have to give it a 12 out of 10,” laughed Howard. “It’s that good of a movie. People were applauding when the film ended,” said Howard, who also heads a Motown touring tribute troupe in addition to managing a wedding band.

“My only regret is that Danny Ray was never mentioned in the film,” said Howard.

When asked about his character not being represented in the movie, Danny Ray reacted in a calm manner.

“I’ve been getting asked about that a lot lately, but, it’s nothing I can control – but, I really enjoyed the movie,” said the man affectionately called the Cape Man for his role of draping capes on a perspiration-soaked Brown, typically toward the end of performances.

Born Daniel Brown Ray, the Birmingham native said it was by fate that he and Mr. Brown shared names. “We used to laugh about it,” said Ray, now 79. Brown would have been 81. He died on Christmas Day in 2006.

“We were tight. Like brothers,” said Ray. “He always looked out for me. I don’t have any regrets about not being in the film – but I do wish they would’ve contacted me for my input,” said the soft-spoken gentleman who began his gig as emcee and Cape Man in 1961. His impact on Brown’s persona warranted some type of entry in the screenplay, he agrees, but said he appreciated his VIP status during the film’s recent premier in Augusta.

Bassist David Weston played in Brown’s band from 1975 through 1982, his tenure including the high-flying, church performance in the film starring Brown in the now-classic ‘Blues Brothers’ movie in 1980.

“Considering all that I witnessed during my stint, it’s really unbelievable that one could even attempt to include most of the antics and happenings in a two-hour movie. There was lots going on. Some of it was crazy. I was a young buck, so, I’d just sit back and just observe my surroundings,” said Weston, who now co-leads the Weston & Preston trio in the Augusta-Aiken region.

“I’m proud to have been a part of the Brown Band. It’s an experience I treasure. I visited all seven continents and places most people can only dream of. He deserves having the movie just to display a piece of the lifestyle that we experienced.”

Buzz Clifford said he played several jazz gigs for the Godfather of Soul, including private jobs at his (Brown’s) Beech Island, S.C. home for his family and friends. “He had a dark side and good side. He had a big heart and was quick to help when others were in financial straits, said Clifford, whose ex-wife is disco singer Linda Clifford.

“I’m just glad they didn’t just focus on his faults. We all have faults,” said Clifford.

“He always liked the way I did his hair, starting around the mid-1950s.” Stallings said he did all varieties of his styles including the “processed doo” as depicted in the movie when Augusta actor Keith Robinson’s “Baby Lloyd” Stalworth character complained about hair lye while in a barber’s chair.

“I did all his styles, the processed style during the 1965 ‘Ski Party’ movie, through his natural Afro days and even his permanent waves in the early 1970s.

“The movie couldn’t show it all, but they did a good job of showing his independence and the fact that he was a self-made man. He demanded respect, but he dished it out too. And that was during a real difficult period for a black man, but he earned his respect and was paid well for it.

“I’m just proud that I was a part of it all. Really it’s American success story and I’m glad the movie was made for the young people to learn from,” said the 82-year-old Stallings, who said he refused a chance to work for Michael Jackson. “Michael always liked the way Mr. Brown’s hair looked, but I told him, I only work for the Godfather.”

Last year, Stallings returned to his Augusta roots to live a more relaxed life in his later years, he said.

“I wish they would’ve filmed in Augusta. That would have been a treat for many of us. Augusta deserved that.” The movie was mainly screened in Natchez and Jackson, Mississippi, home state of Taylor Tate, the film’s director.

Interesting that the film makes chose not to consult the musicians... I've been told the movie is excellent.

I saw, "Get On Up." It was all right but a bit confusing with all the back and forth flashbacks. Chadwick Boseman did a terrific job portraying James Brown. At times I thought he was James Brown. Now I know that Maceo worked with Mr. Brown past 1975 because I saw the band in Nice, France in 1988 and spoke with Maceo in the green room.

Last year there was a panel discussion at the Apollo hosted by Christian McBride. Danny Ray, Pee Wee Ellis and others discussed in depth their time with the James Brown organization. I found that more insightful.

Looks like a fantastic, nostalgic film .Looking forward to viewing. 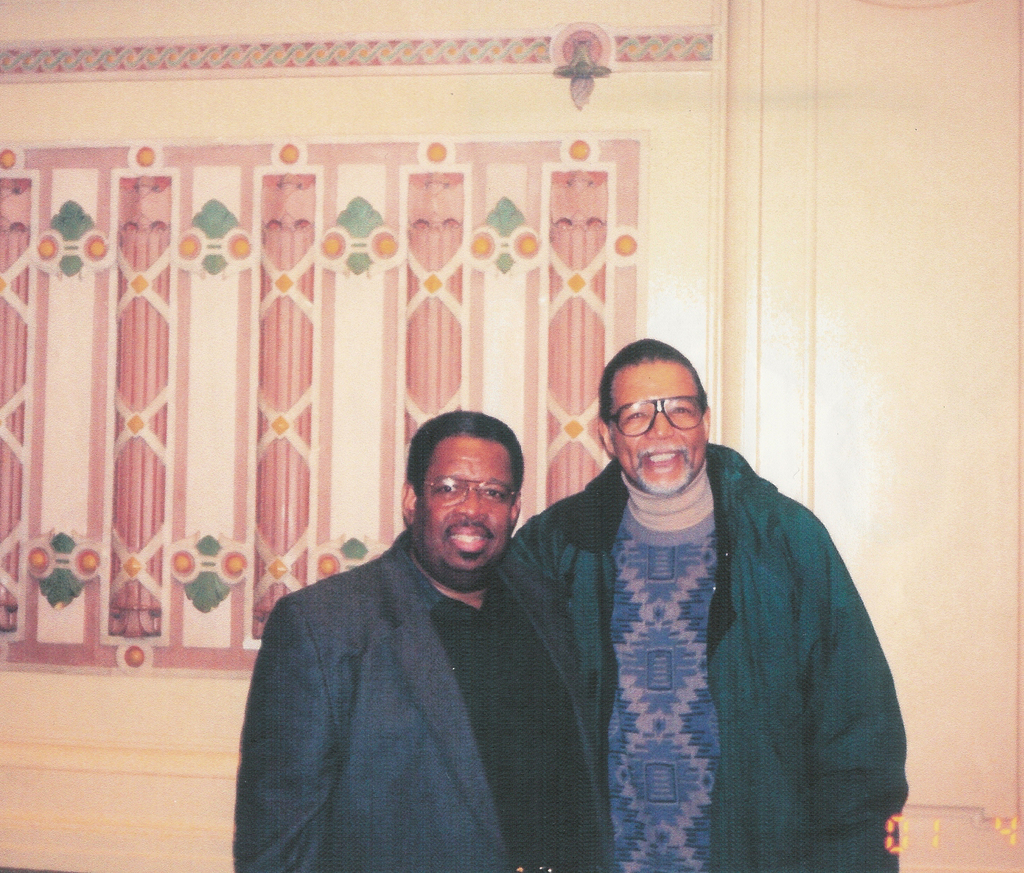 Note: I replaced Fred in the Count Basie Orchestra in 1978