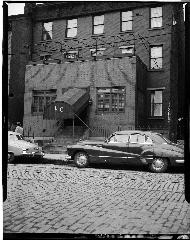 The music never stopped in the Hill for most of the twentieth century, and one of its famed venues was The Loendi Social and Literary Club. But the Loendi wasn't an organ house or one of the famous "Black and Tan" clubs like the Crawford Grill or Hurricane Lounge. In fact, it was so exclusive that you and I probably couldn't get past the doorman.

The club dates back to August 13, 1897, when it was founded by George Hall, best remembered today as the father of one the City's best athletes, Sellers "Sell" Hall. Sell pitched for the Homestead Grays, was a standout in hoops (he played for the Loendi Five, which regularly whipped college teams), football and track, and eventually became a music promoter for black acts.

The Loendi was named for an East African river that flowed from Lake Nyassa until it joined the Ruvuma River, and was mentioned several times in David Livingstone's (As in "Dr. Livingstone, I presume?") 1872 journal.

It was the Duquesne Club for the black elite. Its membership included Pittsburgh’s African American doctors, profession folk, business owners, entrepreneurs and celebrities. The Loendi offered lectures, music, and sponsored athletic teams beside providing a refuge from the teeming masses and a quiet meeting place for the area's black movers and shakers to do business.

The original building was a converted three-story structure on 83 Fullerton Street (erased by the Civic Arena project, on the same street that former City Councilman and stage actor Sala Udin, then known as Sam Howze, was raised) on the corner of Wylie Avenue, a block below Crawford Avenue. The members bought it in 1902 for $100,000.

It didn't look very special from the street, but the local kids used to hang around outside just to watch the limos pull up to the nondescript clubhouse. If they could only have seen the inside... It had an atrium, a rosewood piano, artwork by Henry O. Tanner, plush carpets, tapestries on the walls and a library/reading room, along with billiard and card rooms. Its dining room had a steward.

As a private hall, the Loendi didn't hold many public events. They would hire local bands, never larger than quartets, to play for the members during weekends, for dances or for special events. More often than not, they just brought in a solo pianist. The club never had a bandstand, and as an older building, its rooms weren't particularly spacious. And it was most certainly not a venue for hard bop or Mississippi blues; the musicians played or reworked standards and the classier contemporary pieces, as befit the club's image.

Outside groups with the right connections could rent the building, too. For example, the FROGS (Friendly Rivalry Often Generates Success) society had many members with ties to the Loendi. They held dances there until the Arena project nuked the neighborhood and the club moved. FROG events were front page news for all the local African-American press (they still are), and usually quite a bit livelier than Loendi acts.

While they may not have been on the cutting edge, the Loendi could roll out the carpet for the big-time performers, and that's how it earned its rep in the Pittsburgh music scene. An invite to one of their private artist parties was a guarantee for a night to remember. The club featured or honored musicians like Billy Eckstine, Lena Horne, Sarah Vaughn, Count Basie, Jimmie Lunceford, Bennie Moten, Cab Calloway, and Louis Armstrong. High brow or not, the members did enjoy their swing, and sometimes even shared the swag.

According to Colter Harpers 2011 dissertation "The Crossroads of the World," here's what they did to celebrate Billy Eckstine (a bit redacted): "In 1952, the Loendi sponsored a week of events for Pittsburgh vocalist and bandleader Billy Eckstine, who was returning to the city to perform in downtown’s Stanley Theater...The events included the Loendi Formal at the Fort Pitt Hotel honoring Billy Eckstine; open house for Billy at the Loendi Club; teen-age party for Mr. B; Loendi press, radio and TV party at the club, and the big salute to Eckstine at the Famous Door (in East Liberty).” It's a wonder Mr. B got to perform while he was here!

But like everything else that got in the way of the Civic Arena, the Loendi's days in the Lower Hill were coming to an end. In 1958, they opened a new building at 841 Ledlie Street in the Upper Hill (off Bedford Avenue at the end of Cliff Street), an impressive and modern one story structure. It wasn't the same, though. Membership became easier to come by, and it eventually turned into more of a social club than haven for the elite.

Still, it had its moments. The biggest may have been on April 8, 1967, when 400 people elbowed into the Loendi to celebrate "Bill Powell Night," honoring the career of the WAMO/WILY DJ and Courier columnist. But as time went on, the club was suspected of harboring gambling and other illicit activities, and was sometimes even under police surveillance, who came to regard the Loendi as a party bar by the seventies.

It soldiered on into the early eighties. The last band we could find to play the club was Jothan Callins and the Sounds of Togetherness, featuring saxman Kenny Powell, and they may have sounded taps on the Loendi era in Pittsburgh music history.
Posted by Ron Ieraci at 5:00 PM

George Hall was my Greatgrandfather. Enjoyed the article.