We are an ever-evolving idea for new methods in jazz movement; An experimental performing arts collective with an organically jazz philosophy of synchronizing, contrasting and playing the moment.

"FUAZZ" Where The Funk Meets The Jazz

You need to be a member of The Pillow Project to add comments!

are back with special guests from Paris and NYC

Originally from Philadelphia and currently NYC, Sabir Mateen has been a world renowned avant guard/free-jazz artist (Alto & Tenor Saxophones, Flute, Piccolo, Bb & Alto Clarinets, Composer, Arranger, Conductor, Poet) and has performed with the greats such as Cecil Taylor, William Parker Ensembles, Alan Silva, Wilber Morris, Jemeel Moondoc, Charles Downs, among many others. Mateen has performed in Europe, Japan, and Africa, and is also involved in Collective bands such as TEST, The Downtown Horns, The East 3rd St. Ensemble, as well as leading The Sabir Mateen Ensemble, Omni-Sound, Trio Sabir, and Juxtapositions. Sabir Mateen was recently  introduced to The Pillow Project at a free-jazz session in Paris.

Paris legend and East Liberty native, Moe Seager has been working with The Pillow Project both abroad and in Pittsburgh on collaborating his live poetry and the company's physical jazz. Moe is a writer and musician known for his provocative poetry and crowd pleasing jazz performances, and has published 3 books of poetry, several short stories and some 20 stage plays produced in the U.S. and France. A Golden Quill award winner for journalism (1988) and a human rights award recipient (1989) Seager's career led him to Paris in 1991 when the French Ministry of Culture published his epic length poem, "Rio Escondido". Moe is also a commentator for RT TV, Paris.

Also debuting is the Pittsburgh premiere of "The Fifth in Jazz": A new conceptual performance directed by Pearlann Porter with projection design by Mike Cooper focusing on the company's frequently visited thoughts on our perceptions of reality and of the present tense.

[The Memory of Paper will begin at approximately 10:30pm]

only at The Space Upstairs

The SECOND SATURDAYS jazz-happenings are The Pillow Project's original creation for igniting a new movement of live, physical-jazz in Pittsburgh... sharing dance, light and music together in a truly unique jazz-lounge/performance-gallery atmosphere. Every second Saturday of the month features a evening open to the public of ongoing improvisational performances and live multimedia experimentations from the company and special guests as our honest, spontaneous, jazzed expression of the moment. 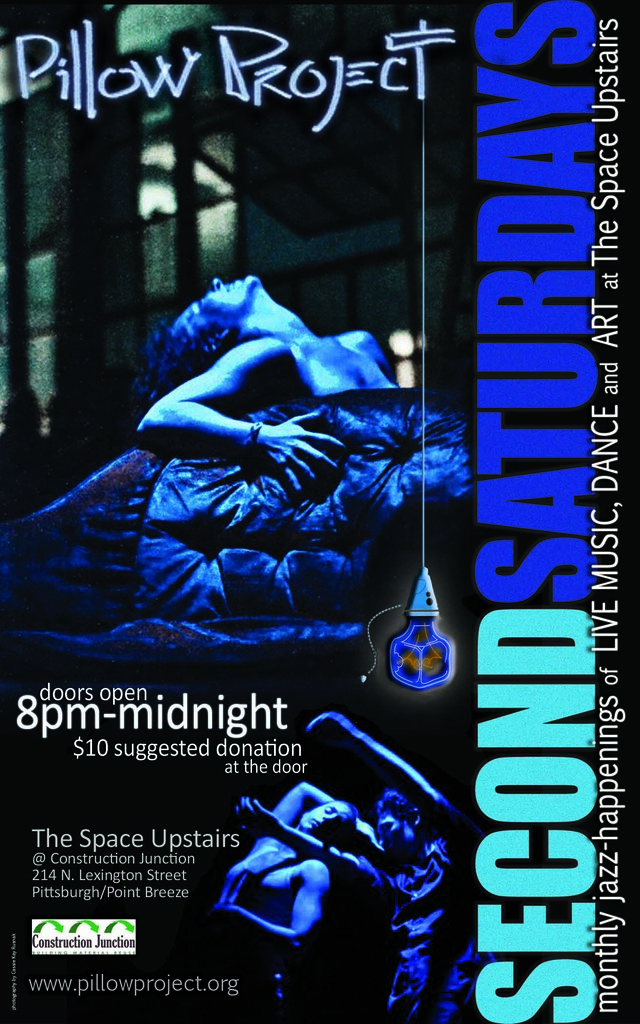 I collaborate with the philosopher Erin Manning, whose new book from MIT Press, called _Relationscapes_ (2009) might be of real interest to anyone interested in examining commonalities between dance performance and jazz performance from the perspectives of cognitive science and philosophy. She runs The Sense Lab in Montreal (consortium of faculty and grad students from Concordia, U Montreal and McGill), and the journal _Inflexions_ (http://www.inflexions.org), and I'm on the editorial board.  I am currently writing about jazz and emergence with respect to theories of time, and the relationship between embodied and distributed cognition (one reason why I started practicing and playing again!), and would love to have a chance to talk and listen to ideas generated by the deep talent here in Pittsburgh!

Hi everyone. Next week December 18, at our Jazz Fan Appreciation Event I would like all who come to bring items to donate to a local food bank for children and families. At this time I think folks who are less fortunate than ourselves could use a little extra. Let's collect non-perishable food items and toys and I will take them to East Liberty Coooperative Ministries the following week.

I don't know how many of you know that at one time I ran the food programs and was operations manager for the Ranbow Kitchen in Homestead. I organized a holiday party and food drives for seven years while I was employed there. This time of the year families more than ever need a helping hand. I hope you can participate and show up ..

Comment by Ricco J.L.Martello on October 9, 2010 at 12:07am
Hey check out the story I wrote on Roy Ayers and Tom Brown
http://www.newpittsburghcourieronline.com/index.php?option=com_cont...

Comment by Anne Annie Friedland on September 24, 2010 at 4:23pm
SEE BELOW. ALSO LISTEN TO THE FIRST CUT ONTHIS SITE.,..,I AM THE ENTIRE MAND!

Comment by Anne Annie Friedland on August 6, 2010 at 1:53am
Hi I play all keyboards and sing. I would love to participate in an event featuring all forms of performance: music dance etc. Let me know when the next open event is.